Ed Byrne is coming to Cardiff on 9th March 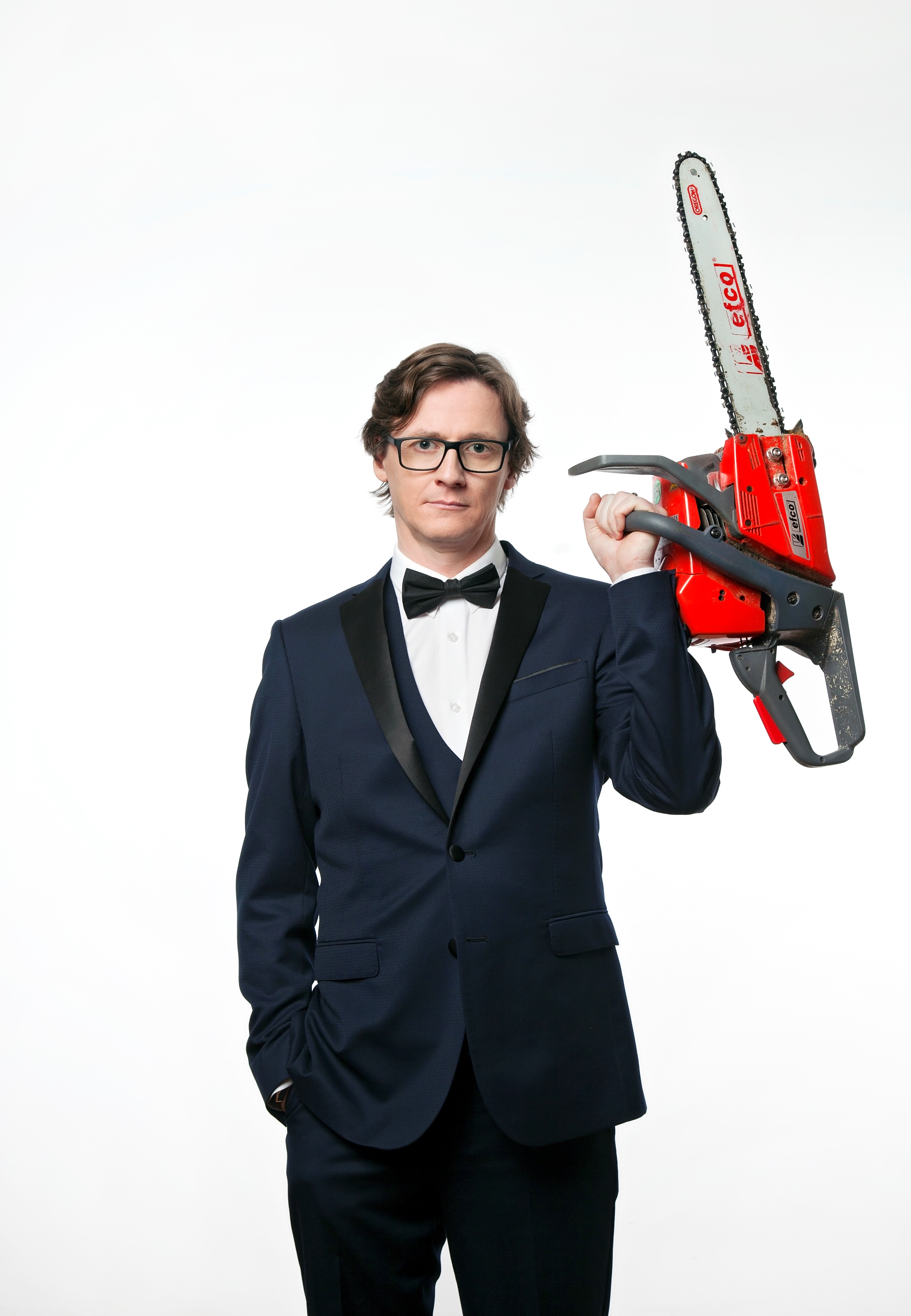 Ed returns to the road this year after a total sell-out Edinburgh Fringe run with his biggest ever tour to date and his brand new show called Spoiler Alert. He says; “I originally intended to call the show “I’ll Millennial You in a Minute”, but my promoter considered the title “off-puttingly baffling”. That’s my own chainsaw in the photo, by the way”. In the show, Ed explores the thin line between righteous complaining and brat-like whining and asks, ‘are we right to be fed up, or are we spoiled?’ Come and watch as Byrne takes this question, turns it upside down and shakes it until the funny falls out. Go on, spoil yourself.

Recognized as one of the finest observational comics in the industry, Ed’s television credits are countless (provided you’re really bad at counting); Mock The Week, Have I Got News For You, The Graham Norton Show, Live At The Apollo, The One Show, Comic Relief Bake Off 2015, The World’s Most Dangerous Roads and, most recently, he and Dara O Briain filmed the follow up to their Big Adventure show for BBC2 entitled Dara and Ed’s Road to Mandalay.

PRAISE FOR ED
✭✭✭✭✭ “A masterful display of the comics art…This is a seamless and perfectly timed show that could stand proudly next to any Izzard, Bailey, Carr or Skinner stadium-filler” SUNDAY TIMES
✭✭✭✭✭“The hour is self-deprecating, never self-indulgent, and his packed audience are well entertained” SUNDAY EXPRESS
✭✭✭✭✭ “A one-hour tour de force performance from the master comedian” BROADWAYBABY
✭✭✭✭✭ “Hysterical … a must-see show. My face still hurts from laughing so much” THE STUDENT NEWSPAPER
✭✭✭✭✭ “Expert stand up from the brilliant Ed Byrne” FRINGE BISCUIT
✭✭✭✭ “Thoroughly entertaining… he is a total pro and, on this form, terrific company” THE TIMES
✭✭✭✭ “Byrne is at the top of his game” SUNDAY TELEGRAPH
✭✭✭✭ “It is rare for a comic to merit the word “masterful” but in this case it is no overstatement” THE SCOTSMAN
✭✭✭✭ “A show full of top –class observational humour….a great comedian making the simple sublime, Byrne gives his audience exactly what they want” EDINBURGH EVENING NEWS
✭✭✭✭ “Superior stand up from the nerd next door” THE HERALD
✭✭✭✭ “There is nothing quite like seeing Byrne doing what he does best” DAILY MAIL
✭✭✭✭ “You can’t help but love him” IRISH SUN
✭✭✭✭ “So artfully crafted” THE ARTS DESK
✭✭✭✭ “Byrne is one of the funniest and most articulate of our established comedians” THE MORNING STAR
✭✭✭✭ “There is a reason why he has become a household name” ED FEST MAG
✭✭✭✭ “One of the top acts to see year after year” ONE4REVIEW
“At the height of his powers…it’s no wonder this is selling out nightly” THE OBSERVER
“His set had the audience in stitches for most of the evening – they roared their approval at the end” THE STAGE

To book your tickets, please visit www.stdavidshallcardiff.co.uk
or call the Box Office on 029 2087 8444