There’s the usual healthy helping of pop too. We’re rewinding our clocks to a golden era of music with The Sensational 60s Experience (Weds 7 March) featuring its greatest line-up yet with Mike Pender of The Searchers and Mike D’Abo of Manfred Mann, Herman’s Hermits, The Fortunes and The New Amen Corner.

Likewise, if you’re up for a bit of stand-up there’s Irish comedy favourite Ed Byrne (Fri 9 March) with Spoiler Alert, but only very limited tickets are now remaining for short-fused spoof reporter Jonathan Pie (Sat 30 March) in Back to the Studio. Tickets to see pro-rock superstar Steven Wilson (Weds 21 March) have already sold out but It’s always worthwhile checking with our Box Office and keeping an eye on social media for any late releases though.

Ellen Kent’s awe-inspiring Opera & Ballet International presents Puccini Madama Butterfly (Sun 18 March) as the Hall is transformed into a stunning Japanese garden. Conversely, The Circus of Horrors (Tues 20 March) revels in the beautifully bizarre and grotesquely gruesome in its brand new incarnation Voodoo. Elsewhere, there’s a charity gala performance named Let’s Sing for Lincoln’s Legs (Sat 24 March) which raises money for a life-changing operation for a local little boy, and the Festival of Diversity (Sat 10 March) revolves around the intriguing tale of The Borneo Princesses.

Folk fans are in for a treat too with Cara Dillon & Sam Lakeman (Tues 6 March) sharing the stage as part of Roots Unearthed, whilst hometown heroes the Capital City Jazz Orchestra (Weds 28 March) are back with a helping hand from fab flautist Gareth Lockrane.

As ever, don’t forget to support the boys in the Six Nations too as Wales’ home games against Italy and France are shown live in our L3 Lounge (Sun 11 & Sat 17 March)! 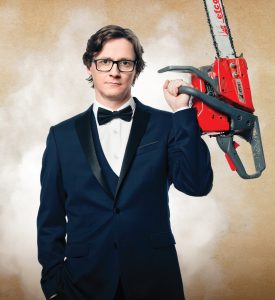