Ellie Britton (21) student, Backwell, North Somerset: I remember having several tick bites as a child, but never noticed a bullseye rash.  When I was 10 I became too ill to go to school, and was misdiagnosed with ME/CFS.  We never linked the illness and the tick bites. I’ve missed out on most of my teenage life. My worst symptoms are severe fatigue (I often need a wheelchair when leaving the house), constant nausea, stomach ache, headache, ‘brain fog’, sore throat, bone, joint and muscle pain, tremor, sensitivity to smell, light and noise.  My NHS Lyme test was negative but a private test in the UK showed I had Tick Borne Encephalitis and 3 months of antibiotics were recommended. I subsequently had a number of tests in Europe and tested positive for Lyme disease. I am now travelling abroad for treatment every 3 months, which is expensive and difficult with my declining health.  I’m currently living in Cardiff, unable to work.

Billionaire, John Caudwell recently put the spotlight on Lyme Disease in the media when he and his family discovered they have this debilitating illness.

On May 24th, Lady Mar will be supporting Lyme sufferers at Parliament Square in London.  They will be protesting about the current inadequate NHS test for Lyme: poor diagnosis by GP’s and insufficient treatment for this debilitating disease.

They are also calling for Lyme borreliosis to be made a Schedule 1 notifiable disease, so that the true UK incidence of Lyme is recognised.  Germany has around 250,000 cases a year compared to official UK figures of around 1,000 but Lyme sufferers believe the UK is in the midst of an unrecognised epidemic with an annual incidence of Lyme borreliosis in England and Wales  more likely to be between 15,000 and 30,000 cases.

A Petition to the Government, signed by 10,473 UK residents means the Government will have to respond.  In a recent debate, the House of Lords said “The Government should investigate Lyme Disease as 3000 new cases a year is probably only the tip of the iceberg.  There should be UK Guidance – too many Doctors and Consultants are still unaware of Lyme Disease.”

Dr. Chris Newton, (MSc PhD Research Scientist) BioMedical Research Scientist questions the NHS’s current blood tests for Lyme which “employs only one or two antigens and can result in patients being misdiagnosed as negative for Lyme Borreliosis.”

Lyme protests will also be taking place around the world during May in America, Scandinavia and Europe.

Case Studies
James Prosser, police officer (37) Worcester: has no recollection of a bite but has been ill for 2 years with mainly urological infections. He had a break of 8 months with few symptoms, he then suffered cognitive and neurological problems, issues walking, tremors, crippling fatigue, constant feeling of flu. Poor memory, poor sleep.
“My GP referred me to an Infectious Diseases specialist, who diagnosed ME/CFS and said I couldn’t have Lyme if I couldn’t remember a bite so I wasn’t tested.  A month later I  tested positive for Lyme and co-infections at the private Breakspear Hospital.”
“So far, I have spent £14,000 on tests, treatment, and now my wife, who is a Sister in A&E, has just tested positive for Lyme and the co-infection Babesia.”

Rhiannon Collins (21) Kent: was bitten by a tick aged 4, she had a rash but was told her Lyme tests were negative and offered no treatment.  At 18 she became very ill and eventually had private testing which confirmed she had had Lyme disease for 14 years. Her family discovered from medical records that her initial test at 4 years old was in fact positive but the results had ‘been lost’ by PHE.
She now struggles to walk, her spine has degenerated, her joints dislocate, she has neurological problems and suffers extreme pain all day, every day. Rhiannon improved slightly after some private treatment but now her mother, Debbie is appealing for funds to take her daughter to see an expert Lyme doctor in America.

Ellie Britton (21) student, Backwell, Somerset: had several ticks removed from her as a child.  When she was 10 she became ill and was misdiagnosed with ME/CFS.  She missed 4 years of secondary education. She now requires a wheelchair, has severe fatigue, nausea, stomach ache, headache, ‘brain fog’, sore throat, bone, joint and muscle pain, tremor, sensitivity to smell, light and noise.  An NHS Lyme test was negative but a private test showed she had Tick Borne Encephalitis and positive for Lyme disease, so 3 months of antibiotics was recommended.  “I have had to go to abroad for treatment as the NHS won’t help me.”  Ellie is currently living in Cardiff doing an A level correspondence course.

Michelle Lockley,  Birmingham: “I was living in Suffolk and became ill in 2002. I developed holes in my skin and was yellow for a year.  I fainted a lot and felt unable to move. I felt so ill, I kept leaving work before I was sacked.  I had recurring tonsillitis and kidney infections. In 2006 I moved to Birmingham.  I saw 6 GP’s and 8 specialists  (brain, heart, spine, kidney, bowel, bladder, infertility and infectious diseases) but no-one suggested
that I had Lyme.
Someone contacted me to say they thought I had what their sister had and recommended a Lyme test via my GP.  The two tier test came back positive for Lyme (Borrelia burgdorferi) in February 2016
I saw an Infectious Diseases Consultant who didn’t want to give me antibiotics and wasn’t sure what to do.  He also told me that Lyme goes away.  I am now fundraising to go to the USA for treatment.  I have 3 young children, so having Lyme is stressful. 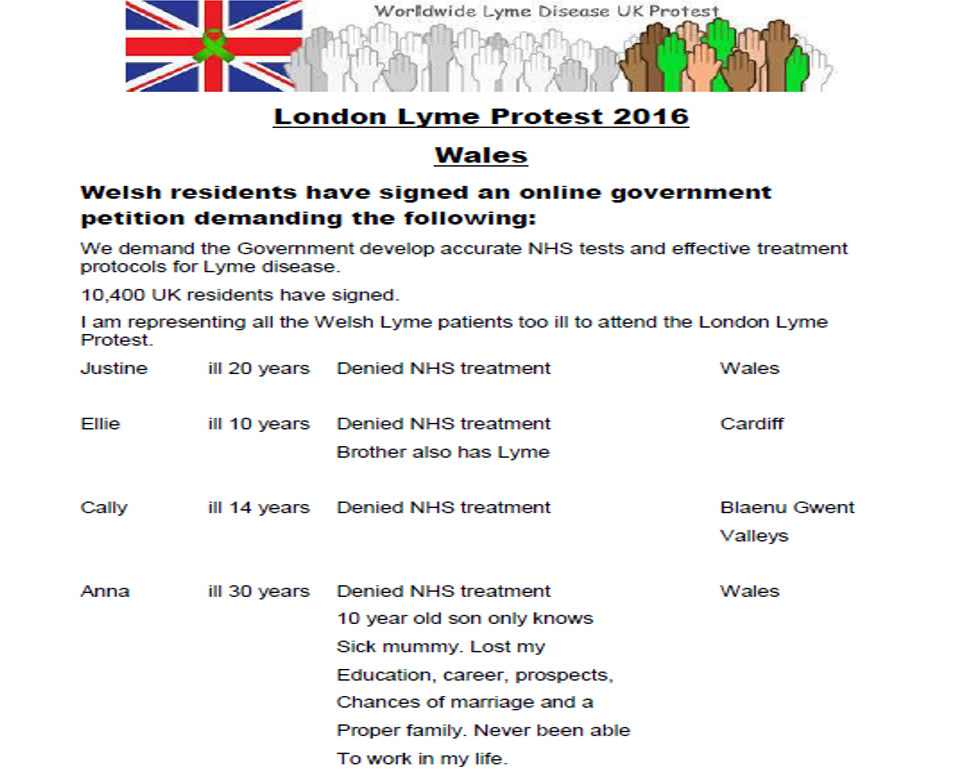 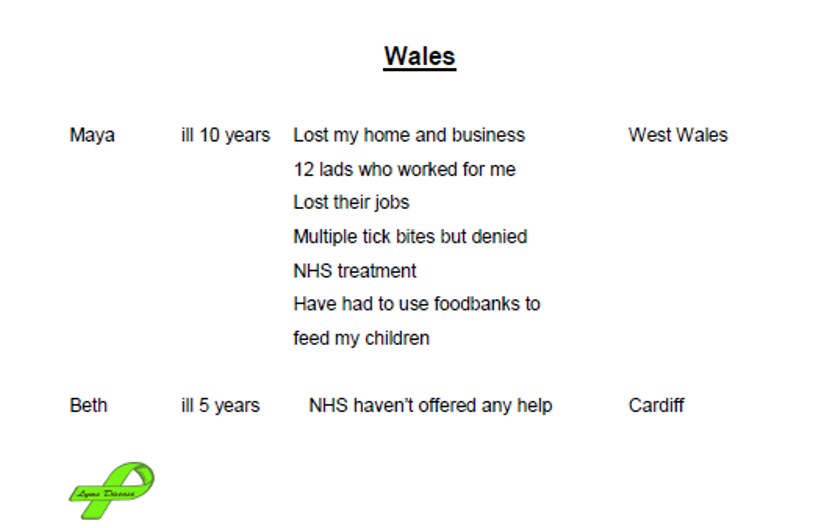