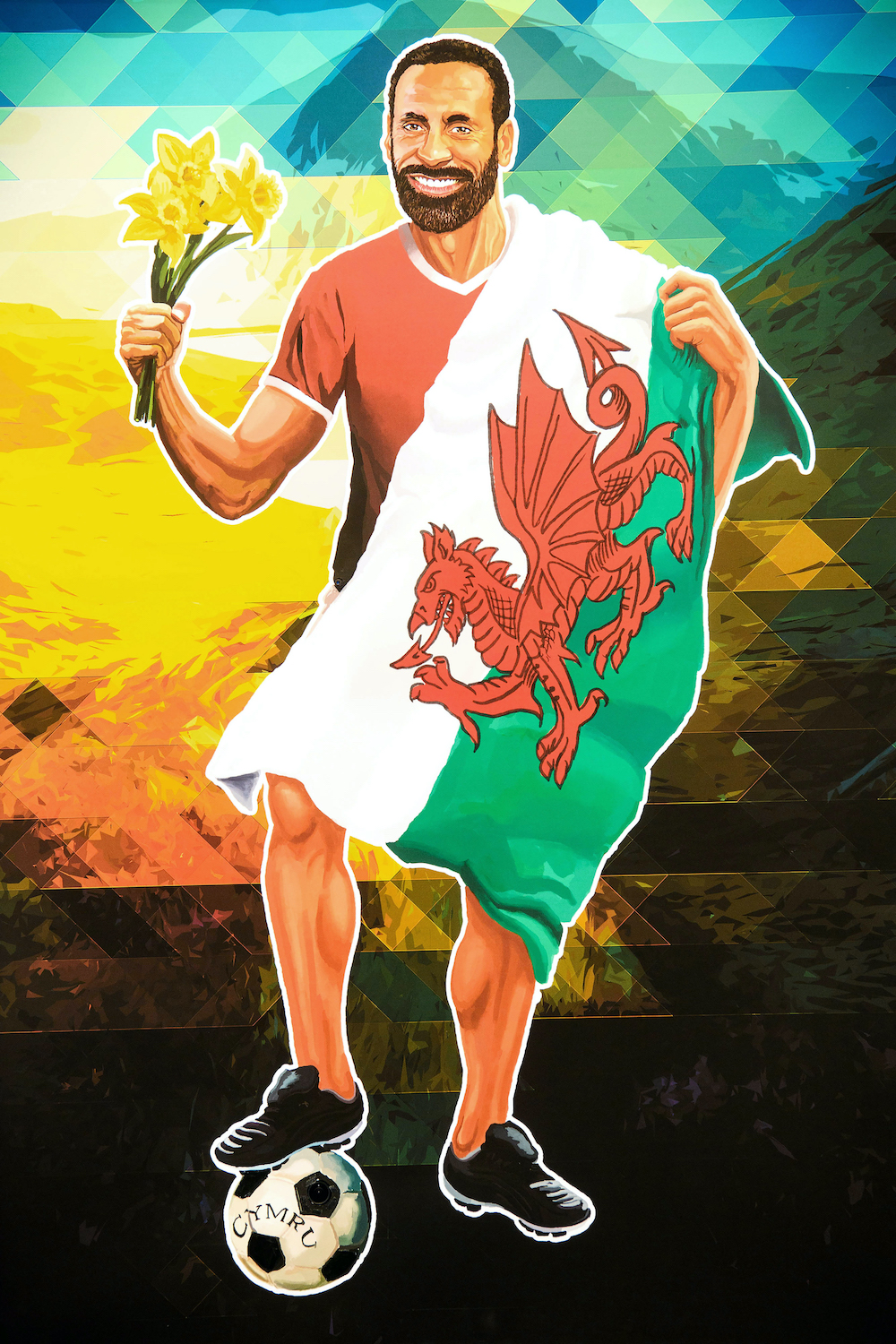 To celebrate the impending clash and bring to life the fact that football isn’t half as fun without your rivals, official UEFA EURO 2020 Partner Heineken teamed up with Robbie Savage for a mischievous set-up on friend and former rival on the pitch, Rio Ferdinand.

Robbie and Rio, once arch-rivals for club and country during their playing careers have since become great mates as commentators. Heineken has brought them back together, now as friendly rivals, in a surprise situation. Ferdinand was led to believe he was being inducted into the prestigious Heineken ‘Hall of Fame’, featuring portraits of international football icons. What Rio didn’t realise was that Robbie was influencing the creative execution of the artwork all along.

Having participated in an online portrait sitting, Rio attended a private viewing at a fashionable East London gallery to meet the illustrious artist, played by an actress, and see the finished artwork for the very first time. Behind the scenes, Robbie was pulling all of the strings and feeding lines to the actors Rio met, including some eyebrow-raising questions from an influential ‘art vlogger’ to document the unveiling.

The painting* certainly captured Rio as an inspirational, proud and majestic international football icon. There was just one problem: the ‘artist’ thought Ferdinand played for Wales. As the cloth is removed from the hanging painting Rio is initially silent before breaking into laughter at the sight of himself wearing the Welsh colours, draped in the Welsh national flag, clutching a bunch of daffodils and stood amidst the abstract landscape backdrop of the Welsh valleys.

Rio’s shock and bewilderment is compounded by the awkward and apologetic reactions of both the artist and the art vlogger, who continue to insist they think he plays for Wales. Just as Rio’s shock and disbelief reaches a high, Robbie bursts into the room and reveals that he has been behind the set-up. There is no ‘Hall of Fame’ and Wales has landed the first blow against English pride. Rio instantly says: “1-0 to Robbie but it’s not over yet, let’s see what happens in the group stages.” Rio then enjoys a bottle of Heineken with Robbie, as they toast to their enduring rivalry. 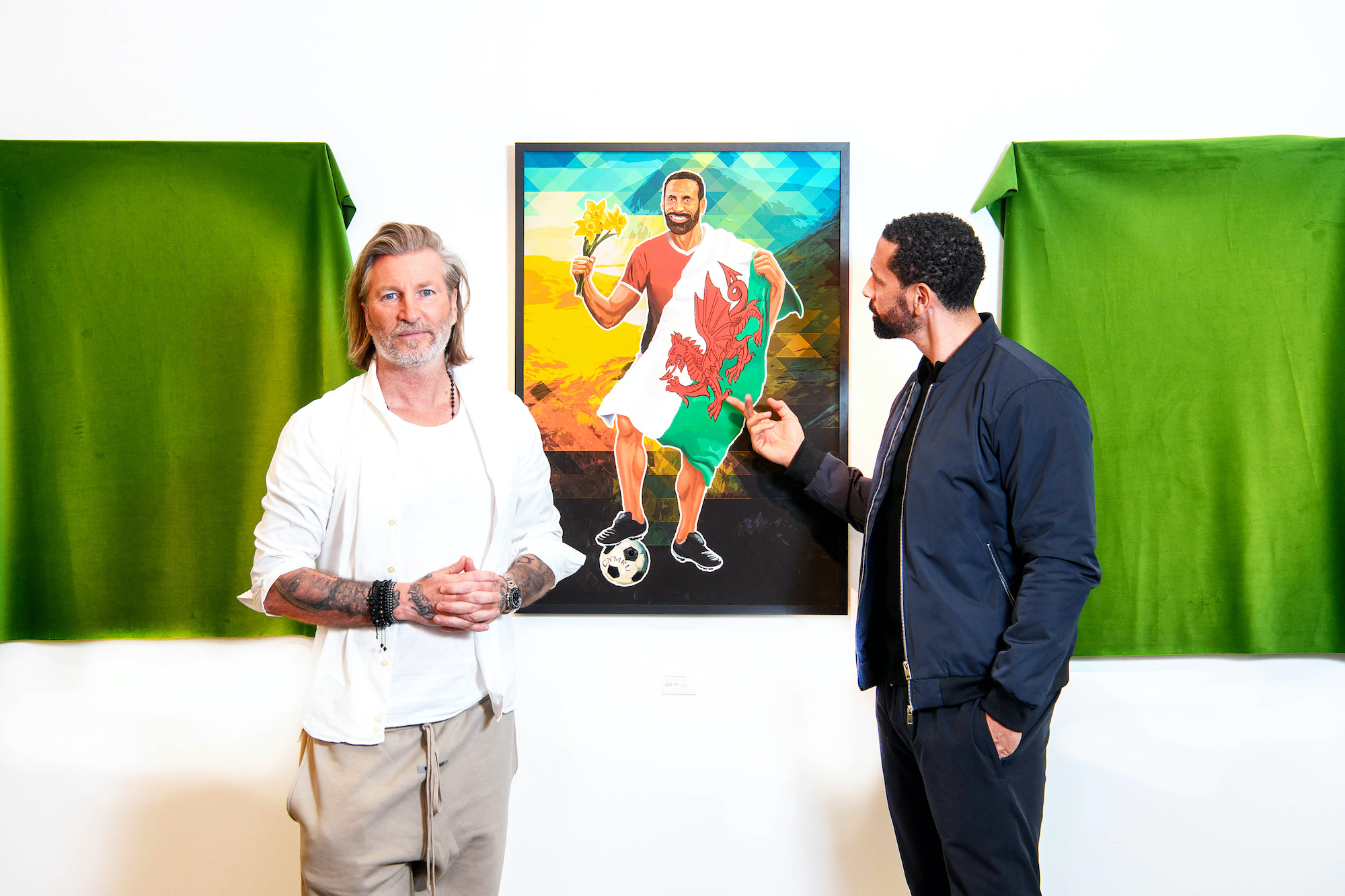 Rio Ferdinand said: “I was genuinely honoured to be selected for the Hall of Fame and I had no idea what to expect. My first reaction of the painting is that the artist had done me a favour on the calves, but then I saw the Welsh shirt and flag, the daffodils. That flag and me don’t go! I played 81 times for England and I’m not going to be exhibited as a rival Welshman! After the initial shock, I was starting to get properly wound up, but then my mate Robbie appeared with a huge grin on his face and I realised that I’d properly been stitched up and he was just stoking the rivalry ahead of the tournament starting.

“Ever since Wales reached the Semi Finals of UEFA EURO 2016 and England didn’t, I’ve had to put up with Savage’s jokes and banter about Welsh superiority. Now, I’ve got to think of a way to get him back.”

Robbie Savage said: “Rio is a proud Englishman and legendary prankster in his own right, so the planning to get one over on him had to be meticulous. Watching his ego inflate and then come crashing back down to the earth clutching a bunch of daffs and wearing the Welsh flag was brilliant. 1-0 to Wales.”

Michael Gillane, UK Marketing Director for Heineken said: “It’s finally here! UEFA EURO 2020 is about to kick-off and anticipation is now at fever pitch. As an official partner, we know that for fans, friendly rivalry is a key part of the tournament and we wanted to illustrate that football isn’t as half as fun without your rivals. With this witty interpretation from Robbie and Rio, it’s clear that you can enjoy the fun in the rivalry and still have ice cold Heineken and laugh together, whatever the outcome.”

The activation is part of a wider global campaign from Heineken, ‘Finally Together’ which recognises the long-awaited reunion with fans, and the rivalries that go alongside – bringing energy and positivity to the sport and fans alike.f daffs and wearing the Welsh flag was brilliant. 1-0 to Wales.”