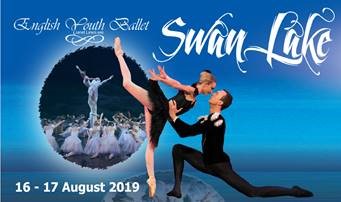 English Youth Ballet opened Swan Lake at New Theatre, Cardiff with a stunning performance directed by Janet Lewis MBE. Everything about the show was impressive which was reflected by the vast and delighted crowd present at the show on it’s opening night.

This production of Swan Lake is set in Russia at the time when the Marinsky Ballet was popular with the Tsar, Swan Lakes sees Baron Von Rothbart played brilliantly by Steven Wheeler plot to secure Royal patronage by marrying his daughter Odile played by Claire Corruble to the Tsar’s son Prince Sergei played by Mark Biocca. A rivalry between Odile (the black swan) and Odette played by Samantha Camejo (the white swan) is played out as they battle for the prince’s affections with tragic consequences.

Everything about this performance was impressive, from the majestic image of a white swan on the screen curtain to the scene decorations: from the snowy landscape to the Tsar’s Palace complete with a large golden statue set design was artistic, beautiful and perfectly set the story enabling the audience to be completely absorbed in the ballet. The colourful costume’s cascaded around the stage in group scenes were both delightful and vibrant with local youth ballet dancing added an element of charm to the production. The quality of choreography and dancing on stage was of the highest standard, which is particularly impressive when you consider not only is this a youth production, but the show only has a ten-day rehearsal time frame. The English Youth Ballet promised a traditional performance focused on the rivalry between Odile and Odette and they delivered on this promise while also delivering a charming, passionate beautiful performance.

The Lakeside scene was classical and beautiful full of emotion, the final scenes were delivered with passion. When you think Swan Lake, you think beauty, grace and classical ballet moves and the ballet delivers on every aspect. Claire Corruble was enchanting and slightly cheeky as Odile infusing a unique personality into the character, while Samantha Camejo’s performance as Odette was graceful, sweet and compassionate.

English Youth Ballet visit chosen towns across the country, offering the opportunity to local academic schools to audition to take part in ballet and Swan Lake has a cast of up to 100 dancers from South Wales, although the majority of the dancers in this production are from Cardiff despite the forty-mile radius the ballet operates to. But that’s not all the English Youth Ballet do at the end of the performance the audience were treated to guest speeches from Cardiff’s Lord Mayor Daniel De’Ath, and Noah’s Ark Children’s Charity introduced by Janet Lewis MBE who delighted the crowd when she forgot the Lord Major’s surname, Lord Mayor Daniel De’Ath  smiled as he stepped forward to deliver his speech. English Youth Ballet always give a special performance to a local hospital in each town they visit as well as donating funds to support the chosen charity. The crowd were invited to donate to Noah’s Ark Children’s Charity and collection buckets were provided on the main stairway in the theatre to do so.

All cast members delivered outstanding performance breathing life into the classic that is Swan Lake whilst personalizing it and making the performance unique, in addition to this the charity work that English Youth Ballet do in each town they visit is both generous and appreciated. Swan Lake is a unique ballet experience.