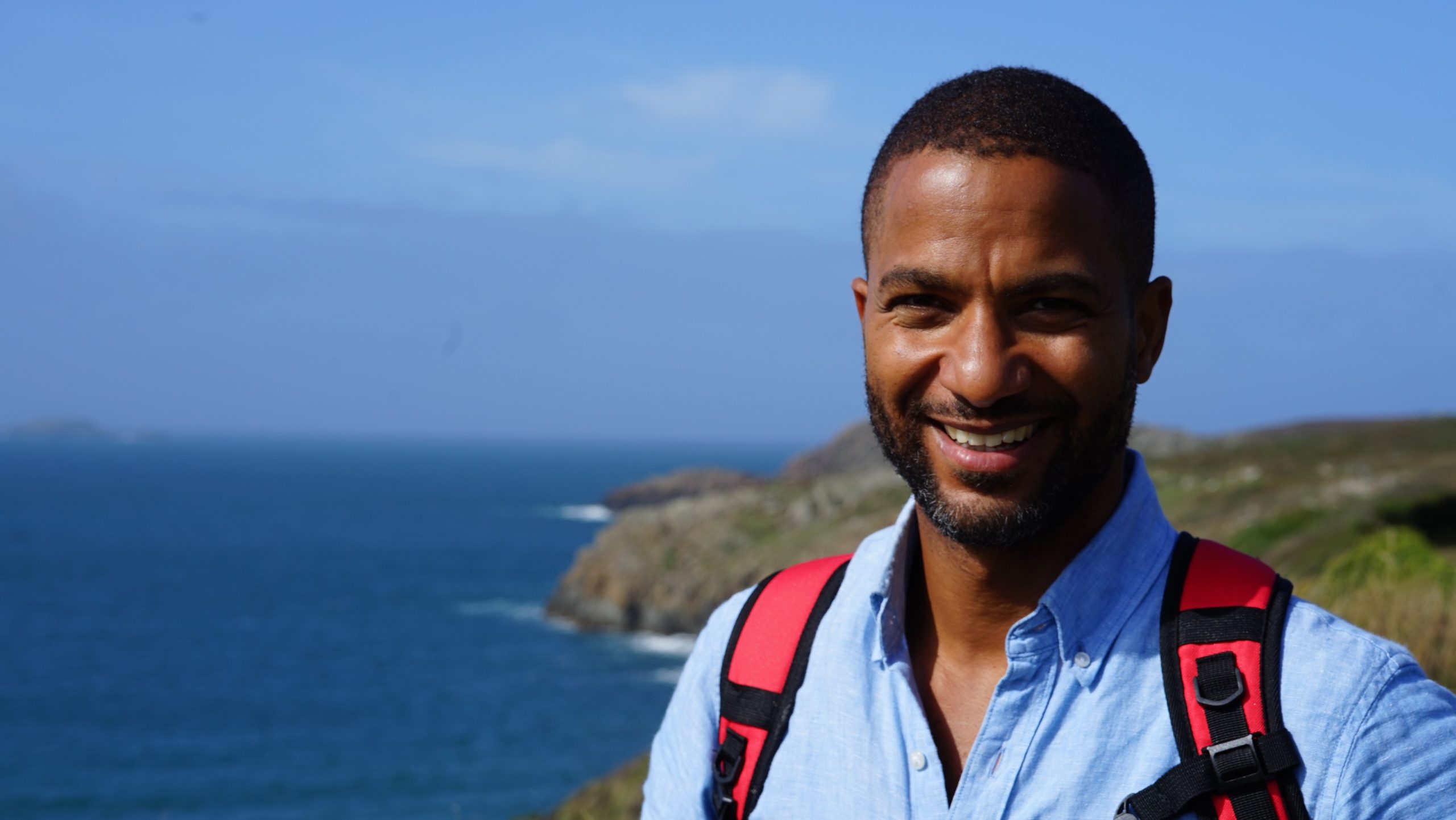 Lockdown hit TV viewers are being offered the chance to travel along the Wales Coast Path from the comfort of their own living room – including locations stretching from the sand dunes near Port Talbot to the English border at Chepstow with stops in the Vale of Glamorgan also on the route.

Good Morning Britain presenter Sean Fletcher will be meeting some of the many amazing characters who live and work along the 870-mile route which runs from Flintshire to the River Wye.

His journey across south-east Wales takes in Merthyr Mawr, Lavernock and the Glamorgan Heritage Coast and also the Black Rock Lave Net fishermen who come from Sudbrook, Portskewett and Caldicot near Chepstow.

The six-part series, Wonders of the Coast Path, was filmed by ITV Cymru Wales before the Covid 19 lockdown began. It will be broadcast in Wales from 8.30pm on Monday 27th April.

It will then be broadcast across the UK on the ITV network during the summer.

Says Sean: ‘It’s vitally important that everyone follows government guidelines and stays at home, but in these difficult times this series can hopefully provide a bit of virtual escapism.  We have the most beautiful and diverse coastline in the world, waiting there to be explored and enjoyed by everyone when we are past this and the time is right.”

Sean starts the final leg of his journey on horseback with the classical singer, actress and broadcaster Shân Cothi. The pair explore the dunes at Merthyr Mawr near Port Talbot.

Says Shân: “These dunes, they are so historical and I remember seeing rugby players training up the dunes.  I’ve seen battle re-enactments the other side of here and you can see such a lot of wildlife.”

One apparently natural plant though has been causing problems for the local environment.

Sea Buckthorn was introduced in the area in the nineteenth century to stabilise the dunes.

But National Trust ranger Duncan Ludlow has spent twenty years trying to combat the invasive species and stop it taking over the precious ecosystem.

Crossing the river Ogmore, Sean walks along the Glamorgan Heritage Coast and finds out more about the creation of the massive cliffs from Dr Claire Earlie of Cardiff University.

He also enlists members of the Barry Amateur Radio Society to re-create the sending of the first radio transmission of over open water from Flat Holm Island to Lavernock Point by Italian inventor Guglielmo Marconi in 1897.

“Here in this field, in the middle of Lavernock, the world changed,” explains Marconi expert Tim Wander.

“Marconi believed that radio was a system for the future. But he had no backers, no support until he was picked up by William Preece, a Welshman.  He was the Chief Engineer of the British Post Office. He put his arm around Marconi and said ‘show us what you’ve got’, and this is where he came.”

Sean’s final stop is in the Severn Estuary, close to the Severn Bridge.

Here, he meets some of the last fishermen in Wales to practice the ancient technique of Lave Net fishing.

Brothers Martin and Richard Morgan of the Black Rock Lave Net Fishermen’s Association explain: “We have got a maximum of eight licences.  We are the last traditional fishery left on the Severn Estuary.  A hundred years ago you would have come here, there would have been fisheries all along the Monmouthshire coastline.  They are all gone now.  We are passing the tradition on.  That’s what we are all about.”

Jonathan Hill, Executive Producer of Wonders of the Coast Path explains:  “In these difficult times when people aren’t allowed to enjoy the great Welsh coastline, this series offers a wonderful escape to some of the most spectacular places along The Wales Coast Path.  What really enriches this series are the fascinating characters Sean meets during his journey from north to south. I hope that once the restrictions are lifted people will get a chance to discover the wonders for themselves.”

The section of Sean’s journey along the Wales Coast Path from Merthyr Mawr to the Severn Estuary is due to be broadcast on ITV Cymru Wales at 8.30pm on Monday 1st June.