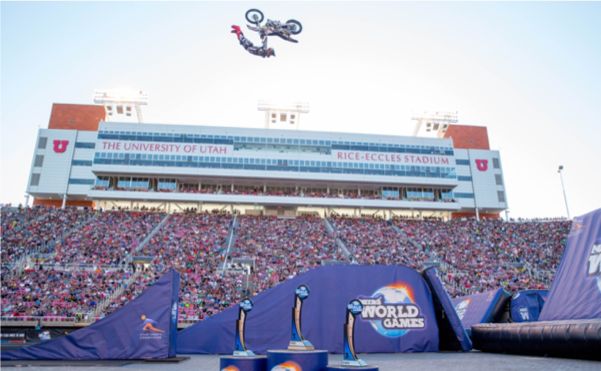 Taking place over the late May bank holiday weekend, Saturday 23rd & Sunday 24th May, the most talented athletes in action sports will head to Cardiff’s Principality Stadium to compete in the 2020 Nitro World Games. Hyped as the must-see action sports event of the year, Nitro World Games brings the very best in FMX, BMX, Skate, and Scooter together under one roof for a mind-blowing sporting competition.

Nitro World Games Wales kicks off Saturday May 23rd at 1:00PM with Semifinals for all sport disciplines. Fans can learn about these elite competitors, choose their favorites and follow the athletes’ journey as they battle it out to secure their spot in Sunday’s coveted Finals. Saturday’s extended schedule is perfect for families to enjoy all that Nitro World Games Wales has to offer.

On Sunday the action heats up even more with the best athletes from Saturday’s Semifinals battling it out for the top spot in the back-to-back Finals. Witness the top athletes in action sports throwing down the biggest tricks in pursuit of a Nitro World Games title. Doors on Sunday open at 1:00PM.

Visitors can reach the Nitro World Games by frequent trains to Cardiff Central. Alternatively, thrill-seekers can travel by car via the various routes into Cardiff from all corners of the UK. There are a whole host of hotels situated around Principality Stadium which visitors can stay in, so the event can be enjoyed to the full, including Cardiff Marriot Hotel, The Angel Hotel, Holiday Inn Cardiff City Centre and Royal Hotel to name a few.

Global sport and entertainment leaders Nitro Circus and Live Nation have partnered with Visit Wales, Principality Stadium and Cardiff Council to bring Nitro World Games Wales 2020 to Cardiff on the Bank Holiday weekend, 23rd and 24th May. Elite competitors in freestyle motocross (FMX), BMX, skate and scooter will face off not only for a coveted trophy, but more importantly for ultimate bragging rights as a world champion. Tickets are available at nitroworldgames.com.

Nitro World Games Wales 2020 will take over Principality Stadium with five electrifying action sports disciplines, all of which push the limits of gravity. Freestyle Motocross and BMX Best Trick each take big air action to the next level thanks to the world’s biggest and tallest ramps, and both have been fan favorites since the event’s inception. Also a fixture is BMX Best Triple Hit, requiring a singular combination of aerial agility and technical consistency necessary to land three tricks in quick succession. Skate Vert, a recent addition to Nitro World Games, will see top athletes take on the halfpipe, and rounding out the event is Scooter Best Trick, featuring one of action sports’ fastest growing disciplines and the biggest ramp used in competition. And with weekend ticket packages starting at £45, plus single day admission available for just £25, Nitro World Games offers fans the opportunity to see the best in action sports, all at a great price (final ticket prices also include additional charges and fees)