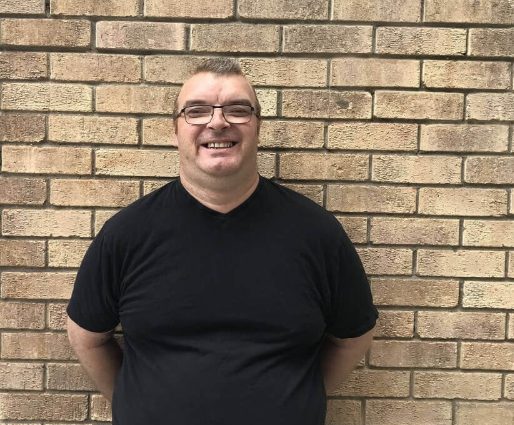 Following years of drug taking, drinking and living on the streets, this World Homeless Day, Andy, 42, is taking the opportunity to reflect on the support Emmaus South Wales has given him, empowering him to turn his life around.

“[I] started drinking socially around the age of 16. By the time I was 20, I’d moved on to drugs. You name it, I tried it, but really it was because it was what we all did – I just followed the crowd. I worked in a cash and carry and I had plenty of ready money. We liked to let our hair down at the weekends.”

Things, however, took a turn for the worse when Andy turned up to work drunk one day.

“I lost my job then and there, but instead of stopping me in my tracks, it had the opposite effect. I started drinking more and more until it got to the point where I couldn’t get out of bed without having a glass of vodka first.”

Andy managed to hide his drinking from his family but was unable to maintain any form of stable relationship. Thinking that a change of scenery would be beneficial, he ran away from home and found himself in Manchester.

“I knew some people there and I thought a change of scene would do me good. Instead, I got even worse. I started taking pills and other drugs. People were reaching out trying to help me, but I was out of control and I didn’t want to know.”

“Eventually I got sick of myself. I climbed to the top of one of the highest buildings in Manchester and stood on the edge, looking down. I hated what I had become, and yet I couldn’t bring myself to jump. I called a friend, it was literally a cry for help. Luckily for me, she dropped everything and came to get me. She took me to hospital, and from there I went into rehab. It was miles away from my friends and family, but that distance was what I needed.”

After spending more than two years in rehab, Andy left there no longer needing drugs. However, he was still without a home and had no one to turn to and nowhere to go.

“I walked the 20 miles to London from the rehab centre, arriving in the middle of the night. I was terrified as I tried to sleep, huddled in a doorway on Oxford Street. In the morning, I approached some other people who were homeless, and they told me where to go to get a meal and a shower.”

Andy was living in a hostel when he found the flyer for Emmaus.

Emmaus South Wales is a local homelessness charity based in Bridgend that supports 19 formerly homeless people by giving them a home, meaningful work experience in a social enterprise, funded training opportunities and an opportunity to regain lost self-esteem and confidence to help rebuild their lives.

“Since being at Emmaus I have changed and developed so much. I have been lucky enough to meet Her Royal Highness the Duchess of Cornwall when she visited our community, as well as the former First Minister for Wales, Carwyn Jones, alongside other local MP’s.”

“If Emmaus hadn’t given me the chance to prove myself, I’m pretty sure I would have ended up dead. Instead, I am developing myself, helping others and giving back to the Emmaus community, which is a really great feeling.”

If you, or someone you know, is homeless, or at risk of becoming homeless, please visit www.emmaus.org,uk/gethelp.

To find out more about the work of Emmaus South Wales, or to donate, visit www.emmaus.org.uk/south-wales.