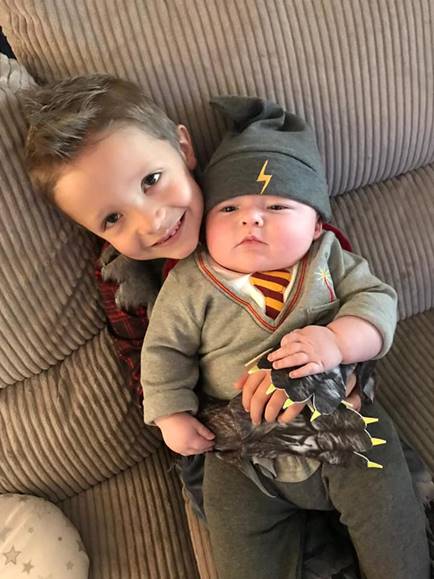 Harri with his brother Logan

The family of a seven-month-old baby from Aberdare are calling for people to make a new year’s resolution to sign up as potential stem cell donors, after being told that their little boy urgently needs a stem cell transplant to treat his cancer.
Harri Stickler was diagnosed with Acute Lymphoblastic Leukaemia, a rare type of blood cancer, on December 5th, 2018. His mum, Bethan, took her son to the GP after she noticed swelling under his eye and her instinct told her something wasn’t right.

After seeing Harri, his GP called an ambulance which took him straight to Prince Charles Hospital in Merthyr Tydfil, where they initially tested him for meningitis. He was later diagnosed with leukaemia and transferred to University Hospital Wales in Cardiff, where he has been receiving treatment ever since.

Speaking about his diagnosis, Harri’s grandmother Anne, said: ‘I saw Harri a couple of days before he was diagnosed and he didn’t seem ill at all, so the news came as such a shock, it’s just awful.

‘He was in hospital over Christmas so as a family we didn’t celebrate at all, it was just like any other day at the hospital. But even though he’s really ill, he’s still happy, he’s still our boy.

Harri is currently having weekly chemotherapy treatment but his family have been told that he will need a stem cell transplant from a matching donor, if he is to be cured of his cancer.

Anne said: ‘Because of his treatment there is a high risk of infection, so no one is allowed to touch Harri except for his mum and dad. This is so hard for the rest of the family, as we just want to hold him.’

Around 75% of UK patients won’t find a matching donor in their families and blood cancer charity Anthony Nolan is now searching the stem cell register for a special stranger who could save Harri’s life. His family are taking this opportunity to campaign for more people to come forward and join the Anthony Nolan register, to help other babies, children and adults in the same situation as Harri.

Karen Archer, Anthony Nolan Regional Development Manager for Wales, said: ‘We are doing everything we can to support Harri’s family in their search for a lifesaving stem cell donor. Every day, five people, like little Harri, will start their search for a matching stranger to give them a second chance of life.

‘Every single person who signs up has the potential to give hope to someone like Harri, who is in desperate need of a lifesaving stem cell transplant. We’re particularly calling on young men aged 16-30 to consider joining the Anthony Nolan register as they provide more than 50% of all stem cell donations but make up just 18% of our register.’

Anthony Nolan recruits people aged 16-30 to the stem cell register as research has shown younger people are more likely to be chosen to donate. It also costs £40 to recruit each potential donor to the register, so Anthony Nolan relies on financial support.

To find about more about joining the Anthony Nolan register, or to find out more about the different ways you can support, please visit anthonynolan.org/Harri