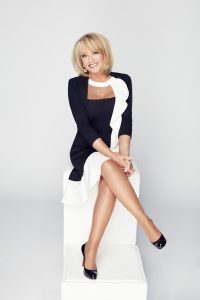 The First Lady of Musical Theatre Elaine Paige is set to bring the West End and Broadway hits which made her famous to Wales this Autumn.

Elaine, who won a Lawrence Olivier award for her performance in Evita, has starred in more smash hit musicals than anyone else of her generation.

Elaine will perform many of the songs that made her a global star at three venues across Wales through October and November including Cardiff’s St David’s Hall, recently ranked one of the Top 10 of the world’s best sounding halls, Venue Cymru in Llandudno and Aberystwyth Arts Centre.

As a recording artist Elaine has released 22 solo albums, including 4 multi-Platinum and 9 Gold, has featured on 7 cast recordings and has had major worldwide hits. She became a household name with songs such as Memory from Lloyd-Webber’s Cats, and I Know Him So Well from Chess by Abba’s Benny Andersson and Björn Ulvaeus. She has performed live in concert all over the world.

Elaine presents the hugely successful weekly BBC Radio 2 programme “Elaine Paige on Sunday”, which celebrates the best of Broadway, Hollywood and the West End, and delights audiences of over 2.5 million listeners each week.

Elaine made her first professional appearance on stage nearly fifty years ago, at the age of 16 and it was her appearance in the 1968 production of Hair that marked her West End debut.

“Elaine Paige in Concert”, presented by Orchard Entertainment, will appear at:

“Paige transfixes the audience with a succession of her trademark contemplative, emotionally powerful interpretations, interspersed with some fascinating anecdotes about her stage career” Musical Theatre Review

“A once-in-a-lifetime opportunity to watch the lady who has quite rightly been given the epithet ‘First Lady Of Musical Theatre’ in an intimate, informal concert of epic proportion! A thousand times ‘bravo!” North West End

“The night as a whole was sensational, and it was an honour to witness musical theatre royalty doing what she does best.” Grapevine

“If she is the Queen of the stage, then this latest offering is nothing short of regal – long may she reign.” Redbrick

“With her biggest hit Memory from Cats and With One Look from Sunset Boulevard as part of the set list, it’s a moment you don’t want to miss.” ManchestersFinest

“You don’t have to be a musical theatre fan to get the most out of this incredible concert.” Break A Leg