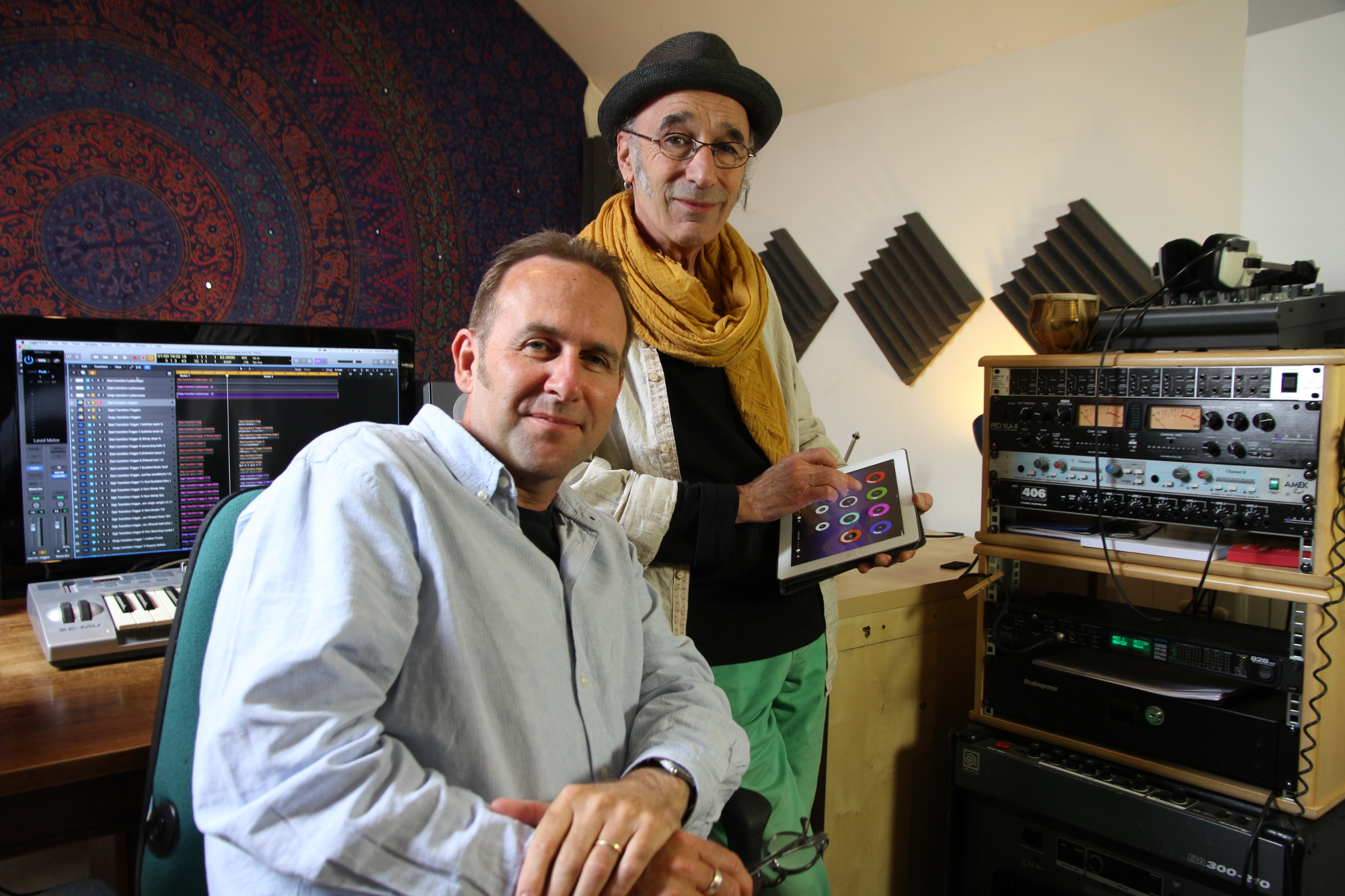 A FORMER Cardiff University student has helped develop an app to help
enrich the lives of people living with dementia after experiencing the
effects of the illness first-hand.

Stewart Redpath, along with Mark Smulian, has created the Lydian
MindHarp – a tool which allows non- musicians to create their own music.

The Mindharp has been shown to help people with dementia engage with
music and interact with people around them – having a long-lasting
effect on their emotional well-being.

Stewart, who studied English and Linguistics at Cardiff University,
said: “It’s an increasingly widespread condition and music is a way
to help people – either those directly affected by the disease or
those caring for them- to live better.”

The MindHarp, which can be played on an i-Pad, enables users to enjoy
making music without the fear of ‘getting it right.’

This is particularly important for people with dementia, who often feel
self-conscious when aware of their condition.

Producer and bass player Mark, who has created Platinum and Gold albums
for internationally successful artists, said: “We are excited by the
MindHarp as we know it can enrich lives for both those affected by the
condition and their carers.

“When people can make their own music, it brings them into the present
moment. The impact on the mind is much stronger than simply listening to
music.”

Mark, who has also used music and the MindHarp as part of a peace-making
approach in Northern Ireland and the Middle East, saw how music helped
his own father, who had Alzheimer’s.

He said: “We played my dad’s favourite music and saw him become more
animated. He started talking when he heard the music, which was
fascinating to watch.”

Mark’s father died the next day, at the age of 80, after a 10-year
battle with the disease.

But the memory of that day, and Mark’s conviction his passion for
music could help others, lived on.

Over ten years later he would meet Stewart, who had also seen the rapid
decline of a family member due to dementia.

Stewart, a guitar player, had become aware of the scale of condition,
which is set to affect over one million people by 2025, while following
his son’s studies.

His son, Kieran, worked on a course project for the Dementia Action
Alliance (DAA) – and Stewart began to think of ways music could be
applied to help the condition.

Stewart and Mark worked on the MindHarp for nearly four years. They
visited the Peggy Dodd Day Centre, which supports people with memory
loss, on a voluntary basis for seven months to develop the app with both
carers and clients.

Several buttons can be pressed at once and it can be played alone or as
part of a group – providing an endless range of music.

Music stimulates the so-called ‘pleasure centres’ of the brain,
releasing the happy hormones, dopamine and oxytocin and reducing the
stress hormone cortisol.

A report from the Commission Dementia and Music, in partnership with the
independent think tank International Longevity Centre (ILC), has found
evidence that music therapy also helps reduce behavioural and
psychological symptoms of dementia – such as agitation, depression,
delusions and aggression.

2.      Report by the Commission Dementia and Music, in partnership with
the independent think tank International Longevity Centre (ILC) – link
at bottom (page 27):
https://www.bamt.org/DB/news-2/call-for-more-funding-of-music-therapy-in-dementia.html
[5]

Mark first witnessed the power of music on people with dementia-related
diseases when he played music for his late father in the latter stages
of his Alzheimer’s.

The father-of-two, who has also used music as part of a peace-making
approach in Northern Ireland and the Middle East, said: “We noticed my
dad became more animated and started talking when he heard the music.

“It had been sad to see my father deteriorate. But just for a short
time, the music brought back the essence of who he had been and was
fascinating to watch.”

His father died the next day, at the age of 80, after a 10-year battle
with the disease.

But the memory of that day and Mark’s conviction that his passion for
music can help others has lived on.

Mark’s father, Leon Alexander, had been a navigator for the British
Royal Air Force during World War II.

He went on to work as head of telecommunications for the European
Commission after the war and moved to Belgium, where he would live the
rest of his life.

A gifted high-flier, it was devastating to Leon and his family to learn
he had Alzheimer’s.

Mark said: “My dad called and told me ‘I have a disease, but I
can’t remember its name’. He kept his sense of humour and
resilience.”

It was on a holiday in Spain two years after the diagnosis that Mark
felt he had started to lose the father he had known.

He said: “He put our car keys in his dressing gown pocket before we
were to head to the airport. He couldn’t remember doing it and it was
very out of character for him.”

Towards the end, Mark’s father could no longer recognise all of his
children. Mark said: “This was initially very upsetting, but there’s
no rhyme or reason to this disease.”

But Leon would light up again when music from German composer Bach was
played.

Meeting Stewart and coming up with the idea for the MindHarp:

Eleven years after the death of his father, Mark would meet fellow
musician Stewart Redpath when they played in a band together in 2014.

Stewart’s son, Kieran, had worked on a project for the Dementia Action
Alliance (DAA) as part of his studies at the University of Bath.

Through this connection, Stewart met people from DAA and saw the
potential for an app for people with dementia.

Dementia affects 850,000 people in the UK, with numbers set to rise over
one million by 2025. And 70 per cent of people in care homes have
dementia or severe memory problems.

Mark and Stewart recognised it was an increasingly widespread issue and
became inspired to learn more about how music could help people with the
illness.

They worked for nearly four years to create a product. They then worked
on a voluntary basis at the Peggy Dodd Day Centre to develop the app
with carers and clients.

How the MindHarp is used:

The MindHarp is downloaded from an App store and is easy and intuitive
to use. It includes eight buttons, marked by different colours, which
can be pressed to make different sounds.

Several buttons can be pressed at one time, with other people playing
along. It is a sensory experience and a vast range of tunes can be
created.

The sounds, which include noises similar to bells ringing and horses
trotting, have been found to trigger associations.

Mark said: “The carer does not need to know what the patient’s
favourite music used to be as the sounds often remind people of a
certain time in their life.”

How does the MindHarp work and how is it different to simply playing
music?

Music stimulates the so-called ‘pleasure centres’ of the brain,
releasing the happy hormones, dopamine and oxytocin and reduces the
stress hormone cortisol.

Many care homes and homes already employ singing and music therapies as
activities.

But the MindHarp is different in that it is an interactive – and the
users get to create their own music.

Research suggests the benefits on the brain are heightened when people
play music, particularly when people are in ‘flow’.
https://www.frontiersin.org/articles/10.3389/fnhum.2015.00518/full [4]

It triggers musical associations and has led to players singing some of
their favourite songs, which may have previously been unknown.

Also, there is no right or wrong way to play the MindHarp, which helps
users to open up without fear of being judged on their condition.

The MindHarp can also be accessed 24/7 and has the added benefit of
being relaxing for the carers.

Who can use it?

Anyone with basic motor skills can enjoy the MindHarp. It can be used at
any stage of dementia.

What are the benefits of the MindHarp: