An innovative Welsh business is proving that science is fun, not scary, with a series of weird and wonderful experiments as British Science Week gets underway.

Caerphilly-based Letterbox Lab is setting out to challenge the way children view their environment and encourage them to carry out their own mini investigations with their clever all-in-one science boxes. And this year’s British Science Week theme of ‘Change’ is particularly fitting, as Letterbox Lab was founded last year by married couple Mia and Bryan Hatton after they decided to transform their own lives!

Mia and Bryan, who met six years ago when working at Cardiff science centre Techniquest, came up with the idea for the non-commitment subscription kits after a nine-month working honeymoon, which included teaching in museums in Norway and a jungle school in Malaysia. “Along the way we met many more people who loved science and honed our skills doing amazing science activities in strange situations,” says Mia. “We made ping-pong ball cannons in a fortress in the Czech Republic, planetary landers on a farm in Norway and balloon rockets in a bamboo school in the Malaysian jungle. We also got chased by an elephant!

“We came back to the UK at a bit of a loss but knowing we wanted to do something to make it as easy as possible for everyone to play with science. We want everyone to be able to enjoy the pleasure of discovery, regardless of their background, prior knowledge or the contents of their kitchen cupboards. In Norway, we had used cheap ‘junk’, such as straws, to make things with, and in Malaysia we didn’t even have these, so we used rubbish to make the rockets. Our belief was, if you can do science in a bamboo jungle, you can do it in the kitchen!” 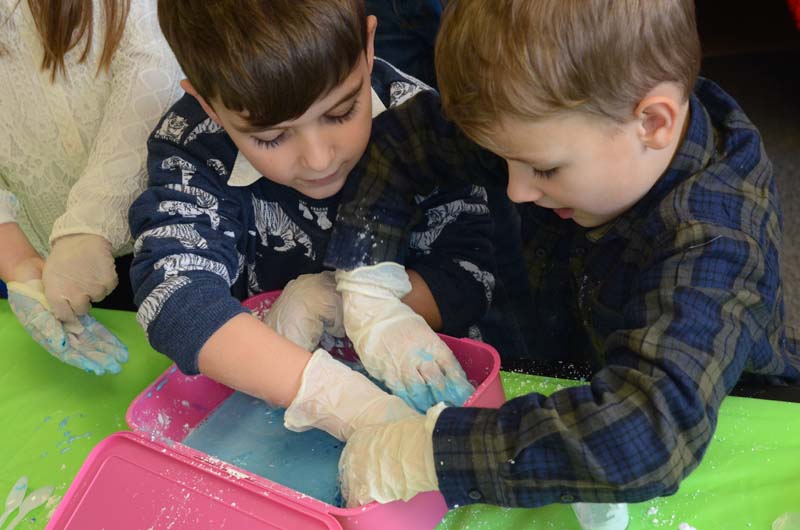 on a monthly basis to either an Explore Box, which contains two or three activities, or an Investigate Box, which has between six and nine activities depending on the length of time expected to carry each out. Both kits fit through a standard letterbox, eliminating trips to the Post Office for missed deliveries and containing, as Mia puts it, “all the equipment you need for the experiments bar the kitchen sink!”

“In Norway we worked in two science centres where we did mostly staff training but also created activities for children, which really informed Letterbox Lab,” says Bryan. “We then went to Malaysia with an eco-tourism company called Ecoteer, which invited us to run a school for a semi-nomadic community from a place called Merapoh on the edge of the Taman Negara National Park. They were a tribe who used to live in the jungle and had been put into a village in Gua Musang, which was very different for them. There was no formal education and the children weren’t obliged to be at school so we didn’t know every day how many children were going to turn up – there could be between two and 20!“

Since its launch, Letterbox Lab has received strong interest from children and parents alike, with a particularly enthusiastic response to mascots Meg and Pico, who were named by visitors at a trade show last year.

To celebrate British Science Week, Letterbox Lab is launching a new YouTube channel, where the team will be uploading all manner of stimulating, surprising and slimy experiments to capture young imaginations. To find out more, visit www.letterboxlab.com or email [email protected].