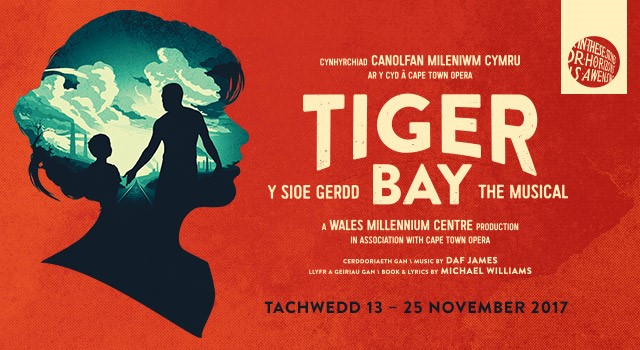 Wales Millennium Centre is thrilled to announce the full cast of Tiger Bay the Musical, which includes a 39-strong cast with many notable names from right here in Wales.

Tiger Bay the Musical – created by a multi-award-winning team composer, Daf James, writer Michael Williams and director, Melly Still – is set in the flamboyant multi-ethnic community of Cardiff’s Butetown in the early 1900s. Extreme poverty meets supreme wealth. Gangs of street children roam the docks. Coal is King, and in the notorious public houses and alleyways of the city’s underworld, a revolution is brewing

Tiger Bay the Musical follows a young woman’s determination to challenge society’s injustices, follow her heart and realise her dreams.

Dom Hartley-Harris who will complete the lead cast as Themba, an African immigrant working the Cardiff docks to avenge his family. Dom most recently played Jagwire in the new musical Bat Out of Hell. His other theatre credits include Beautiful: The Carole King Musical and Accidental Brummie.

Zolani Shangase (Lion King, West End and most recently Chico in the The Fugard Theatre’s production of West Side Story) will travel from South Africa to reprise the role of Yusef, following previews of the Musical in Cape Town earlier this year.

The Centre has turned to Welsh performers to create the production’s ensemble including Zoe George (Wicked UK, Ireland and International tour as understudy for Elphaba and Nessarose), Lucy Elson (career debut) and Elin Llwyd (S4C presenter, Welsh National Theatre’s Lady from the Sea and Spring Awakening) who will play shop girls of the famed David Morgan department store.

Graeme Farrow, Artistic Director at Wales Millennium Centre said: “This is the biggest production to come from the Centre to date and we are proud to give people a snapshot of the history of our home and celebrate some of its richness and strength through music and performance.
“To capture the essence of the production, we were seeking a diverse cast so we are delighted to be able to announce our full cast includes talent from across the world as well as right on our doorstep.”

And to round it off, ten young Welsh actors and actresses will make up the water boys.

The gang of water boys are:

A fictional story of romance, revenge, heartbreak and hope, the world premiere of Tiger Bay the Musical is on Wednesday 15 November 2017 at Wales Millennium Centre. Tickets are on sale now at www.tigerbaythemusical.com