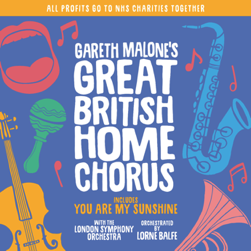 Launched the first week the UK officially went into lockdown, eleven weeks and 44 ‘at home’ rehearsal sessions later, choirmaster and broadcaster Gareth Malone announces the release of a totally unique EP, bringing together the voices of 11,000 participants of his Great British Home Chorus project from around the world. All profits from the release will be donated to NHS Charities Together.

The EP, co-produced by Gareth and Grammy-winning producer Steve Lipson, includes ‘You Are My Sunshine’ – introduced in the very first Home Chorus session – and features members of the London Symphony Orchestra, whose parts are recorded remotely, generously providing their services in aid of the NHS. The track has also been reorchestrated for this release by award-winning Scottish composer/producer Lorne Balfe (Military Wives, The Lego Batman Movie, Mission Impossible: Fallout). Other tracks on the EP include Elton John’s ‘I’m Still Standing’ and ‘Somewhere Only We Know’, originally composed and performed by Keane.

Gareth says, “Running the Great British Home Chorus for the past nine weeks has been an honour and has helped me and many others to retain a sense of normalcy and focus during this incredibly challenging period in our national history. The rehearsals have become important for both choir members and choirmaster. We have been joined by a host of guests and many, many singers of all different ages and levels of experience from around the world. This EP will stand as a testament to the efforts of all of us to keep our spirits up and come together united when we are so divided by this terrible pandemic.”

Kathryn McDowell, LSO Managing Director adds, “The London Symphony Orchestra were delighted to offer their services to support the brilliant NHS staff at this extraordinary time. We are also thrilled and honoured to be joining our former colleague Gareth Malone and the thousands of singers who are taking part in this fantastic project. Singing and music making has flourished during the lockdown with so many people finding joy, energy and comfort in taking part and sharing their love of music. As we emerge from the crisis, music will continue to play an important part in our nation’s recovery.”

The Great British Home Chorus has so far seen over 2.2 million views with over 133,000 people from across the globe registering their interest in the singing programme via the dedicated Decca Records website, connecting people through song during this difficult time.

The BBC have announced that Gareth’s new project will be serialised for television, continuing his award-winning series of documentaries The Choir, with further details to be announced soon.

With a growing network of dedicated fans raising voices and funds for the NHS Charities Together appeal, Gareth’s Great British Home Chorus brings together the efforts of individuals in isolation, sharing talents and maintaining virtual friendships, and building a new kind of choral community that defies borders.

100% of profits from this product will be donated to NHS Charities Together (registered charity no. 1186569). The estimated donation per product sold is £1.50