Picture the scene. A wealthy married couple living a seemingly happy and carefree life in Victorian London, a large multi-storey house staffed by several servants. Yet all is not what it seems. This is the premise of ‘Gaslight’, written as long ago as 1938 by Patrick Hamilton, yet still being performed today, a testament to the strength and substance of the story. Directed by Anthony Banks the play retells some past truths of male dominance over women back some 80 years ago but with a much darker twist. 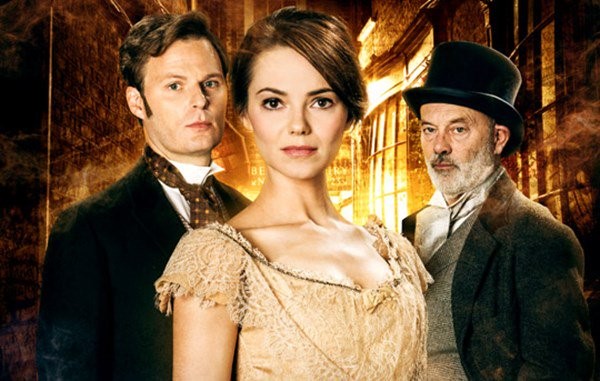 Bella Manningham, a woman whose Mother suffered from mental illness, finds herself becoming more and more forgetful.  She misplaces things and hears noises at night when her husband Jack is supposedly out.  She begins to fear for her sanity because of her husbands’ cunning plan.  But, is she really going mad, or is it the work of her controlling and devious spouse?

Rupert Young plays a smooth, manipulative bully.  He takes pleasure inviting the maid and the housekeeper to join in with his view that his wife Bella, is mentally ill. Bella is filled with doubt and confusion from being groomed by her twisted husband that she begins to agree with his view.

Keith Allen, who plays a retired policeman called Rough, turns up out of the blue to speak to Bella.  He reveals a secret much darker than she could’ve imaged about the house she lives in and the man she is supposedly married to.  Rough, brings the glimmer of hope and plenty of funny lines to uplift the audience.

Helen Anderson, plays the loyal housekeeper Elizabeth. Whereas, Charlotte Blackledge undermines Bella in front of her husband by playing the sultry young maid Nancy, who later coverts with Jack behind her back.

Kara Tointon is the central character Bella.  She delivers a captivating performance, and really captures the character`s feeling of confusion as the story unfolds. What is especially impressive is the time Tointon spends on stage.

There are some ‘jump out of your seat’ moments as the play progresses and at times it is very intense. Luckily there’s a happy ending for Bella as she is freed from her abusive controlling husband and last but by no means least the case that has haunted Rough for 20 years, is finally closed.

A brilliant production which we thoroughly enjoyed.