GET THEM HOME FOR CHRISTMAS! REWARD FOR STOLEN DOGS DOUBLED TO £20,000 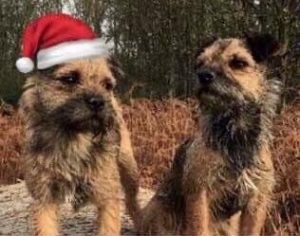 Georgie Bell, the heartbroken owner of Ruby and Beetle, two Border Terriers who were stolen from the Lothian Estate on the Scottish Borders just after Christmas last year has vowed NOT TO GIVE UP her search.

Georgie has captured the hearts of dog lovers across the country with a massive Facebook following of over 14,000 people, in the search for her beloved dogs.  With the help of their supporters, they have now secured, for a short period of time (until the end of December) and to coincide with the festive period and the anniversary of them being stolen, another £10,000 for a reward to bring them home.  This brings the reward to £20,000!  That’s £10,000 for the return of Ruby and £10,000 for the return of Beetle.

This family has been through a horrendous year and their supporters want to spread the word as wide as possible to bring them back for Christmas.

Georgie said “We need to spread the word as wide as possible.  Ruby & Beetle are our family.  We are broken without them.  We just want our wee dogs home.  No questions asked.  Please, please, if you know anything, do the right thing and help us bring our girls home where they belong”.  Georgie added “We know they are out there somewhere”.   One of the dogs, Beetle, recently had her microchip keyed into a chip checker database twice in quick succession. This has left the family wondering who did this and why?  But, because of the GDPR act, this vital information, that could lead to the perpetrators, cannot be shared with the owners.

As part of the campaign “Get them home for Christmas” and to spread the word far and wide members of the Facebook page “MISSING – RUBY & BEETLE” are putting stickers on their Christmas post – so far 156,000 stickers are in the postal system – spreading the word to reach all corners of the UK.

Dog theft destroys the people who are victims of this heinous crime, the Bell family’s lives have been laid bare for everyone to witness – they have endured a horrific year as a family. 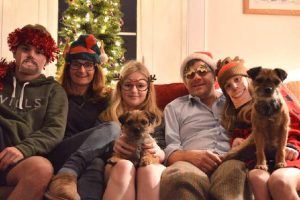 This last photo of the Bells gathered happily together was taken just days before the dognapping almost almost a year ago.

The family plea: “If you know anything at all, there will be no repercussions, we are not interested in prosecution, we just want our two beautiful dogs returned safely so that our family can be complete again in time for Christmas”

Georgie and Edward Bell have three children, Tom, Felicity and Frankie who are all devastated at the theft of their much loved family pets. More information and pictures can be viewed on the web site which has been set up to aid the search –www.findrubyandbeetle.com.    Alternatively please phone 07989 513946