GETTING FIT AND DOING GOOD: GOODGYM LAUNCHES IN CARDIFF 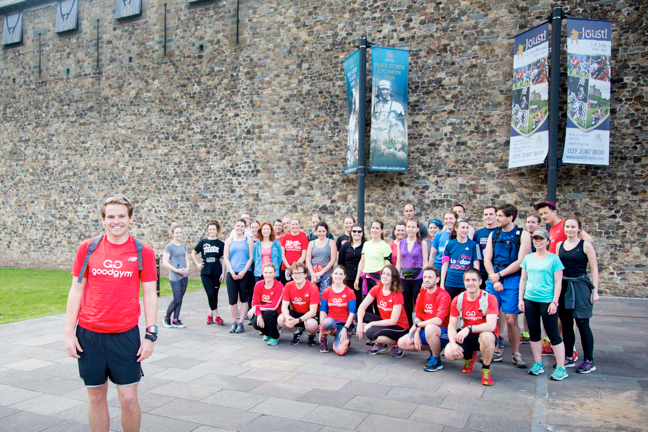 CARDIFF, MAY 25th 2017 – GOODGYM – the community of runners who combine getting fit with doing good – launched in Cardiff this week (May 23).

The inaugural run on 23rd May saw 35 runners run 2K to Canton Community Hall where they helped Canton Grows Wild create a disabled access path to the gardens, plant 100 plants, pull up weeds and install a brand new sign. The task involved the runners shifting 1 tonne of rocks and gravel using buckets and wheelbarrows for an intensive workout before running 2K back.

Members of the new GoodGym group in Cardiff, which has a unique approach to building community cohesion, promoting fitness and reducing social isolation, will stop off on their runs to do physical tasks for community organisations and to support isolated older people with weekly social visits and one-off tasks they can’t do on their own.

The group will meet every Tuesday at 6.15pm, in the foyer of the Yr Hen Lyfrgell (The Old Library) in town, before heading off for a run and to complete a task for the evening.

In addition to the weekly group run, some GoodGym runners will also be paired with an isolated older person and commit to a weekly social visit and/or help with one-off household tasks. The GoodGym befriending scheme has been proven to reduce loneliness and improve wellbeing.

Over 320 people have already signed up to the Cardiff group, with 21 founding members.

“It’s fantastic to have GoodGym come to Cardiff, the heart of Wales. I am most looking forward to helping runners succeed in their fitness goals, whilst encouraging participation in charitable efforts that aid the Cardiff community. We have already received overwhelming levels of support in Cardiff, from both runners wanting to sign up and community projects wanting our help and so it’s really exciting to think about the difference GoodGym running club will make over the coming weeks, months and years in Cardiff.”

Age Connects Cardiff & The Vale, the council and Age Cymru act as referrers for linking older people to GoodGym for coach runs and missions.

Maria Battle, Chair of Cardiff & Vale University Health Board, said: “On behalf of the Partnership we are delighted that GoodGym is launching in Cardiff.  We are fully committed to promoting active lifestyles as part of our strategy for keeping people well.  What is fantastic about this initiative is that this is combined with supporting older people in our communities and helping ensure that people can build friendships and retain their independence living at home.

Mathew Coffin, Service Manager at Age Connects Cardiff & Vale, GoodGym’s referral partner in the area, said: “Loneliness and Isolation is a significant problem for many older people in Wales, Age Connects Cardiff & Vale is delighted to work in partnership with Good Gym to help those in need.  Getting fit whilst helping others is the perfect combination and an inspired idea.”

GoodGym Cardiff runner Sue Fernandez from Cathays, Cardiff, said:
“I have a lot of time for the elderly, so GoodGym really appealed to me. I’m particularly looking forward to getting paired up with an elderly isolated person for the Coach Runs. The process of becoming a coach is so well organised and it’s all done properly with thorough checks and training which is really great to see.”

GoodGym Cardiff runner Mikey Owens from Adamsdown, Cardiff said:
“I heard about GoodGym more than a year and a half ago in a running magazine’s article about the London group, and I’ve been keeping an eye out for when it was coming to Cardiff and the day has finally come! I was really keen to join because it’s a nice mix of getting fit and doing good.”

David Kilner, Pollination Officer from Canton Grows Wild, said:
“It was amazing to have GoodGym’s support this evening in laying a disabled access path for Canton Community Hall gardens. They are a great partner for the big changes that we want to make in encouraging people to spend more time in green spaces. It was really interesting to meet such a wide range of people who want to get fit and help their local community. I’d highly recommend them to any local community group or charity in need of some helpers. I only wish we had brought more tonnes of gravel for them to shift now!”

GoodGym runners have carried out over 50,000 good deeds to help older people and community organisations throughout the UK. GoodGym operates in 31 areas nationwide and aims to launch in every city in the UK by 2018.

GoodGym Cardiff group runs take place every Tuesday 18:15 from The Old Library. The runs are free to attend and more information can be found at www.goodgym.org.