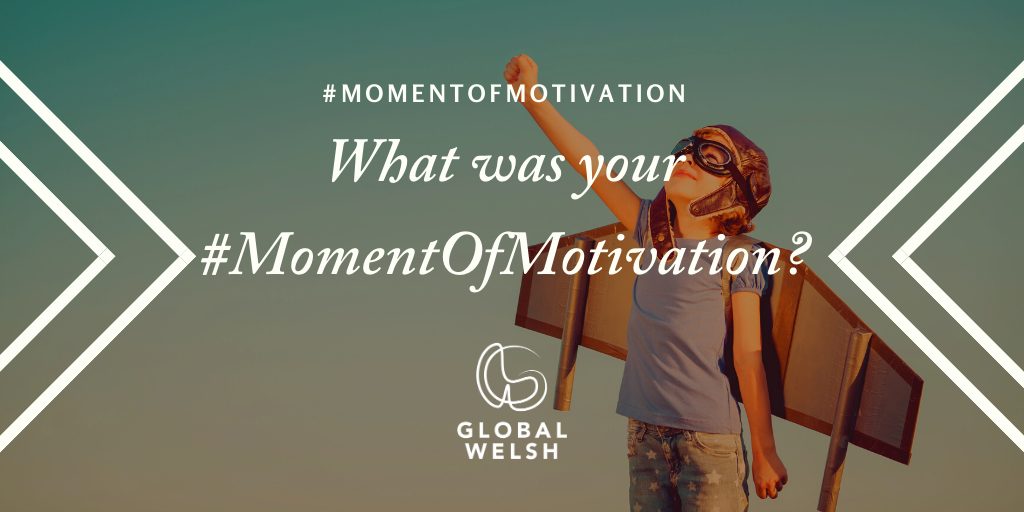 #MomentOfMotivation to inspire and motivate

GlobalWelsh, the not-for-profit organisation building a global community of Welsh people, has launched #MomentOfMotivation. A campaign to galvanise Welsh people around the world to share their motivational and inspirational stories to lift Welsh spirits, offer inspiration and be the catalyst for motivation amongst a borderless Welsh nation of over six million people around the world.

Survey after survey around the world references the devastating impact of the pandemic, from mental well-being to economic turmoil. But often the most motivational moments come from darkest times. The Moments Of Motivation campaign aims to switch the focus, stir-up motivation and offer some well-needed positive inspiration to the Welsh community around the world at this time.

Inspiration for the campaign came from former Welsh Rugby player and ex-CEO of Dragons Rugby, Stuart Davies. Whilst speaking at a GlobalWelsh event in partnership with the Accelerated Growth Programme Stuart recalled upon the time he was about to venture out onto the pitch for his first Welsh Rugby cap and the moment that stayed with him for life.

GlobalWelsh is asking everyone with an affinity for Wales, from any background, industry, or country, to share their personal stories of motivation, short videos, audios or posts on social media. Walter May, founder and CEO of GlobalWelsh, commented:

“Most of us have spent the last few months living through levels of uncertainty not experienced before in our lives. But as we start to come out the other side, facing more unknowns, inspiration, and motivation from others, near and far, is a soft but important tool to helping us get going again, both individually and collectively.”

“We think of Wales, not as three million people within borders, but as a borderless nation of over six million people around the world. We all have our own unique stories and key moments in our lives when someone, or something, has had a huge impact on us to bring about positive change. We encourage every person with a connection to Wales around the world to share that key moment and help to raise the spirits of our wonderful, global, nation!”