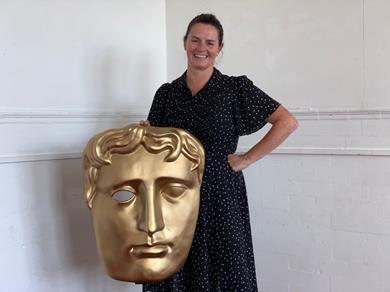 How impressive is the list of nominee’s for this year’s BAFTA Cymru?

We are pleased because we have had the highest number of entries to date, so it means that it’s not all about BAFTA Cymru, it’s about the people that we celebrate and it shows that the industry seems to be in a really good place. We also worked out that there are (more than) 60 productions that have been recognised, yet last year there were only 40 something. It just shows that it is quite a broad list even with a few getting five or six recognitions. There are also quite a lot that are only getting maybe one, or two. Obviously, the actor and the actress categories this year are pretty outstanding because they are people that are recognised internationally at being at the top of their game, but with Celyn Jones, this is his first nomination for actor. Jodie Whittaker gets her first BAFTA nomination, even though you may think surely not, until you look through the list and realise, so I think it’s lovely that we always tend to have recognition for new
nominees, and it’s not still the people who you would expect to see on the list. It’s quite an eclectic mix, we have 19 first time nominations this year, which is quite high, but it’s not the highest that it’s ever been. It just shows that new people are coming through and that the industry is getting that sort of fresh blood, and hopefully encouraging more people to go into the industry.

Are there any key points that stand out for you this year?

There are some nice facts such as we’ve got the first male make-up nominee in ten years, we’ve got the first female camera person in drama, as far as we can see, since we started, so there are these little nods. The female to male ratio is 35/65, so it is going in the right direction, it’s better than last year and the year before, marginally.

I noticed that Keeping Faith had been nominated for one award only, that may come as a bit of a surprise when most people see the nominations list, wouldn’t you agree?

They’re not eligible this year, so next year they will come back in. It depends on the category; it depends on when it gets made and (also) when it gets transmitted. Last year we had series one, and then series two came out too late for this year. So all of the things (on this years list) were on our screens up to the end of March 2019, so anything you’ve seen in the last six months will be eligible for next year. I think people might query it because we’ve got one nomination for Keeping Faith for make-up, but it’s a rollover from last year as the make-up category didn’t run. So those entries rolled over to this year.

When it comes to the selection process, do you all at BAFTA Cymru lock yourselves away to watch all of these entries?

We don’t do anything. Basically, what happens is that we get entries and we check that they are eligible, so they have to fit all of our criteria. Any categories with 12 or more go to our membership to vote and to cut them down. Then they go to an industry jury where we have 144 jury members. There are 24 categories and five jurors apiece; they all have to be un-conflicted, which can be interesting. And we get a new group every year, so we don’t use the same jurors as the previous year. They look at the long list, and then they decide on the shortlist and the winner. That all happens in July. They are all selected by being members of BAFTA, or if they work in the industry, so we will make sure for the costume design award we get costume designers considering the work of costume designers. They can’t have any connection with any of the nominations.