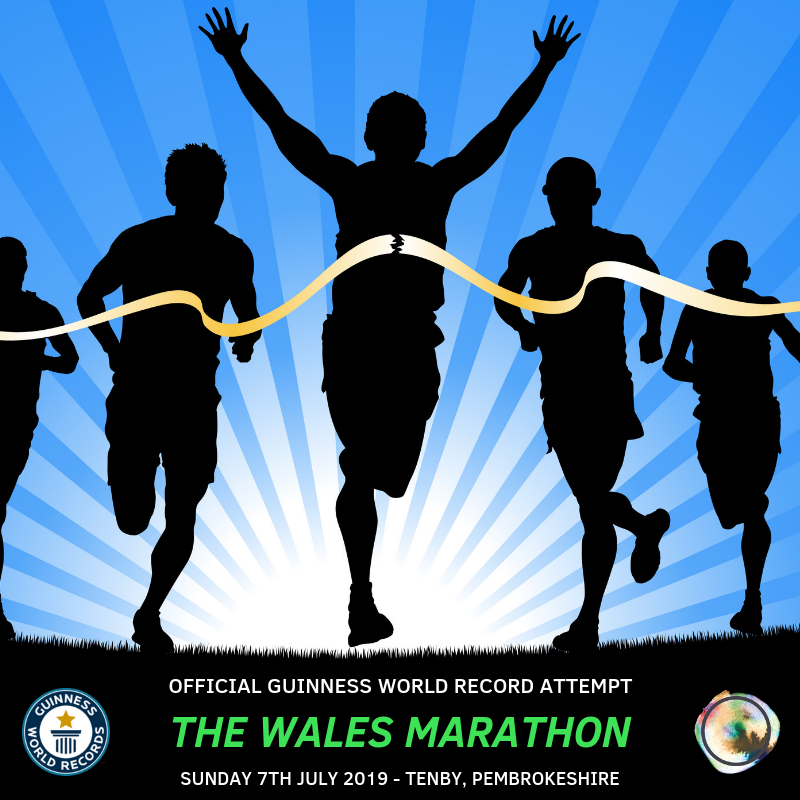 Runners from across Wales are set to put their best foot forward in a bid to break a Guinness World Record and raise £100,000 for Cancer Research Wales in the process.
More than 100 runners of all abilities have already signed up for the attempt to break the official record for the largest number of people to complete a marathon while linked together, which will take place at the Wales Marathon in Tenby on Sunday 7th July.

But the group are still on the lookout for more runners to join the Cancer Research Wales team in a bid to eclipse the current record, which saw 112 linked runners from Canada complete the Calgary Marathon back in May 2017.
Organisers of this new record attempt are hoping to see up to 150 linked runners set off from the start line at the Wales Marathon in July but, crucially, all those who start the race must finish in order for their efforts to be ratified as a new Guinness World Record.

The group of record breaking-hopefuls already in training for the epic fundraising run also includes a strong contingent of runners from Brecon in Mid Wales, a handful of whom took part in a successful attempt by 30 runners to break the same record in 2009.

Organiser of that successful linked marathon record was Neal Gardner, a Royal Mail Delivery Manager from Brecon. Neal will once again be lacing up his trainers to run the 26.2 mile distance as organiser of this new attempt – 10 years after his previous record-breaking triumph.

He said: “The upcoming record attempt at the Wales Marathon has already captured the imagination of so many people, some of whom had never completed a 10k until very recently, with runners from across the UK getting in touch to join the team and taking advantage of this unique opportunity to get their name in the history books.

“Of course this attempt is for a very good cause, with the money we fundraise going to Cancer Research Wales. Cancer is something that, unfortunately, is likely to affect all of us in some way shape or form at some point in our lives, whether that’s a battle with the disease ourselves or perhaps a loved one, friend or colleague receiving the news that they have cancer.

By organising this Guinness World Record attempt we want to make a real difference to those living with cancer in Wales, as well as aiding ground-breaking research in the fight against the disease. Every runner that joins us makes us stronger and increases our chances of reaching our target of raising £100,000 for this fantastic charity.”
Co-organiser of the event is Dale Evans, fundraiser at Cancer Research Wales, who will also be running in the event. He added: “At Cancer Research Wales we are reliant on the generosity of fantastic supporters whose donations, big or small, help to fund our life-saving research into the prevention, diagnosis, and treatment of cancer.