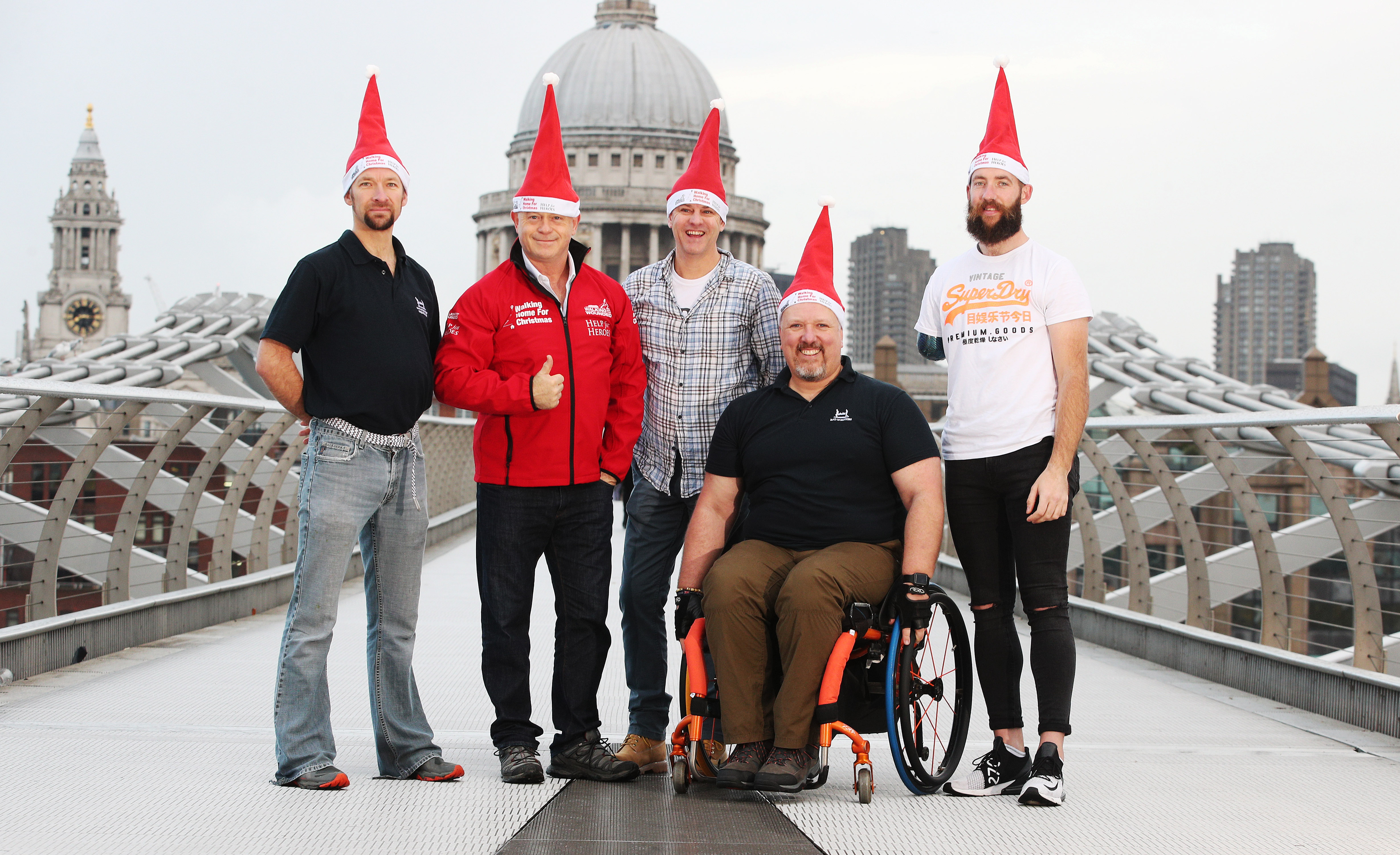 TV star Ross Kemp has backed a major fundraising drive to help Britain’s wounded veterans who are at risk, some battling the evils of unemployment, isolation and struggling with their mental health.

Two of Britain’s leading military charities – Help for Heroes and Walking With The Wounded – have joined forces for this year’s Walking Home for Christmas campaign, supported by British fashion and homeware retailer Matalan.

They have called on Brits across the country to put their best foot forward to raise much-needed cash to help veterans and their families – simply by going for a walk.

BAFTA award winning documentary maker and former EastEnders star Kemp,  who launched the campaign as he walked with veterans to the Cenotaph in London yesterday, said: “We owe a huge debt of gratitude to all the men and women who risk their own lives to make Britain – and the world – a safer place for us all.  Yet when they return, people in the Armed Forces often struggle to adapt to civilian life – and rarely get the heroes’ welcome they deserve.  They may find themselves alone, struggling to find work – or even a home – and many are also struggling with their mental health after witnessing scenes in battle that you or I cannot imagine.  But just by going for a walk in the run-up to Christmas, you can raise money that is essential to help these brave men and women who have risked their own lives thousands of miles from home.”

Anyone can raise money for the campaign by taking a sponsored walk between December 13th – 23rd – whether it’s taking a present to a loved one or walking to a place that means something to you.

The collaboration between Walking With The Wounded and Help for Heroes comes after Prince Harry called for more collaboration within the military sector in a speech at the Veterans’ Mental Health Conference at King’s College earlier this year. The two charities have been working together delivering recovery programmes since 2012 and are honouring Prince Harry’s vision by collaborating even further.

The two charities will split all funds raised from this year’s campaign to pay for vital support for veterans at risk, for example:

Duncan Welton, 46, of Aldershot, Hants, struggled with depression and alcohol after leaving the Army – and even became homeless – but is now back in work and rebuilding his life thanks to support from Walking With The Wounded.  He said: “In the Army you believe you’re invincible and that nothing is going to hurt you. But when you come out you realise you’re not Superman and that what can hurt you may well not be physical but might be something inside.  It took a long time getting to the point where I admitted I needed to speak to somebody but it was a massive help getting to that point.  To anyone wondering about taking part in Walking Home for Christmas, please get off the bus or train early, put your Santa hat on and walk home – you could be helping a veteran on the way to fitting into civilian life.”

Jon Giemza-Pipe, 47, from Ryde on the Isle of Wight, was helped through his rehabilitation by Help for Heroes after he was injured during a 2007 tour in Iraq.  He said: “Christmas can be a very lonely time, especially for injured veterans – and especially for those whose injuries are on the inside – the injuries you cannot see.  If you can raise money by going for a walk for an hour, for 20 minutes or just back from school then every pound counts and you will be making a massive difference.”

Edward Parker from Walking With The Wounded and Mel Waters CEO of Help the Heroes said “By creating your own challenging walk and fundraising you can give hope to veterans who have little to look forward to this Christmas and have walked in far more dangerous places for us. So, what better time to give something back to those who have given so much?

“Whether you walk home from work one day, walk to visit a relative you’ve not seen for a while, or simply stroll around your local park with friends, you will be helping raise money for those veterans at risk, including those who are unemployed or struggling with their mental health.”

Ruth Smeeth, chair of the All-Party Parliamentary Group for the Armed Forces Covenant, said: “Yesterday we stood together to commemorate a centenary since the Armistice.  We will remember them. But we must make sure that our history informs our present and that our dedication to those who have gone is matched by our commitment to those who remain.  Which is why I am so proud to join Help for Heroes and Walking With The Wounded to launch this incredibly important campaign to make sure all of our Veterans and their families receive the support they need, especially in the run-up to Christmas.”

Signing up for Walking Home for Christmas is easy and free – just log on to www.walkinghomeforchristmas.com and register for your fundraising pack.