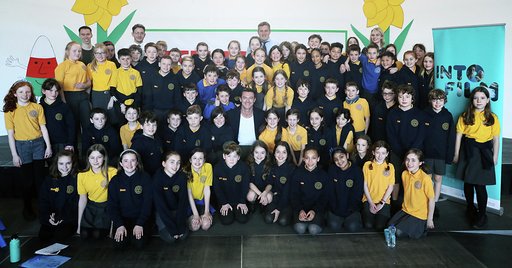 Welsh actor and Hollywood star Luke Evans visited Cardiff this week to meet with pupils from Ysgol Gymraeg Treganna, The Hollies, and Llanharan Primary School, as well as nominees for the upcoming Into Film Awards, in an exclusive Q&A event.

Luke spoke about the educational power of film watching, and the highlights of his career, including tips on how to get into the creative industries. The event was organised by Into Film, a UK-wide film education charity supported by the BFI through National Lottery Funding. This is part of an on-going programme to put film at the heart of young people’s learning and personal development, including learning about careers in the film industry through interaction with professional filmmakers.

Speaking at Ysgol Gymraeg Treganna, Luke Evans said: “I wanted to come here today to celebrate the success of our Welsh nominees for the Into Film Awards in March – a record five nominations this year! It’s wonderful to know that our burgeoning creative industries in Wales have some incredible home-grown talent coming upstream, some of whom I’ve met today.

“It’s important to me that I find ways to support children and young people in Wales. I believe that those of us who have found success should take time to ensure the baton gets passed on.

“I’m thankful I’ve been able to make my dream come true: earning a living from singing, acting and dancing. Knowing that dreams do come true is important for children to see and I hope it helps the next generation of actors, writers, directors, and producers to flourish. The fantastic medium of film gives each and every one of them – regardless of their background – the impetus to find their voice and express themselves, and I very much want to hear what they have to say and share.”

Event organiser and head of Into Film Cymru, Non Stevens, said: “Luke has always been supportive of Into Film Cymru, and I would like to thank him wholeheartedly for giving up his time so freely today to mentor Into Film members. With the introduction of film within Curriculum for Wales 2022 and the exciting growth of the creative industries in Wales, Into Film events aim to showcase the power of learning through and with film.”

Mr Thomas-Williams, Into Film Education Ambassador and teacher at Ysgol Gymraeg Treganna said: “We are grateful to Into Film Cymru and Luke for the stimulating and motivating session today. These types of opportunities help to bring creativity to the fore of our school’s curriculum. Film is an important pillar of the Expressive Arts and by bringing these opportunities to life we’re expanding pupils’ horizons and ensuring every young person is given a platform which to engage with their own creativity. Learning about the many career pathways available within the industry has engaged our learners and inspired the next generation of filmmakers.”

For full details about the awards, visit: www.intofilm.org/awards