The Institute of Art and Ideas presents the How The Light Gets in Festival, situated to the magnificent backdrop of the River Wye. This year’s theme is Tribal Truths and New Wisdom. Crammed packed full of Debates, Talks and Institute of Art and Ideas Academy Courses, mixed with live music, comedy shows and screenings in the art and Cinema Tent. There are several retail tents, Vintage rides, Yoga and the choice of food outlets is superb, along with the children’s play area. You have never been to a festival quite like this one. How The Light Gets In combines Philosophy, Music, Art and Comedy as well as a wide range of everyday issues such as the ‘visibility of women in comedy’ to provide a festival for everyone, which reaffirms that Philosophy is for all!

The Site is conveniently split up into sections, with a map in the back of the programme guide you can easily navigate your way around. There is The Academy field, Bohemia, Fayre, The Park and The Waterfront which houses the catering outlet. It’s good to decide which events to attend in advance as once you arrive it is very easy to get swept away in the calming, mind-freeing effect that make Hay on Wye such a special place to be, the setting is ideal and encourages the mind to wander, you may be tempted to try everything. The 11:30 a.m. live music session on the stage set within the Bookstore Café is the perfect way to start your day at the festival. The set today featured 3-piece band Argadas who played a collection of songs which resembled soft rock, some with slow dark lyrics and some more up-tempo tracks with lighter lyrics with the lead singer providing the single vocal performance on all tracks, the keyboard skills were outstanding and were the highlight of the set. This young trio were the perfect compliment to your morning cup of tea. 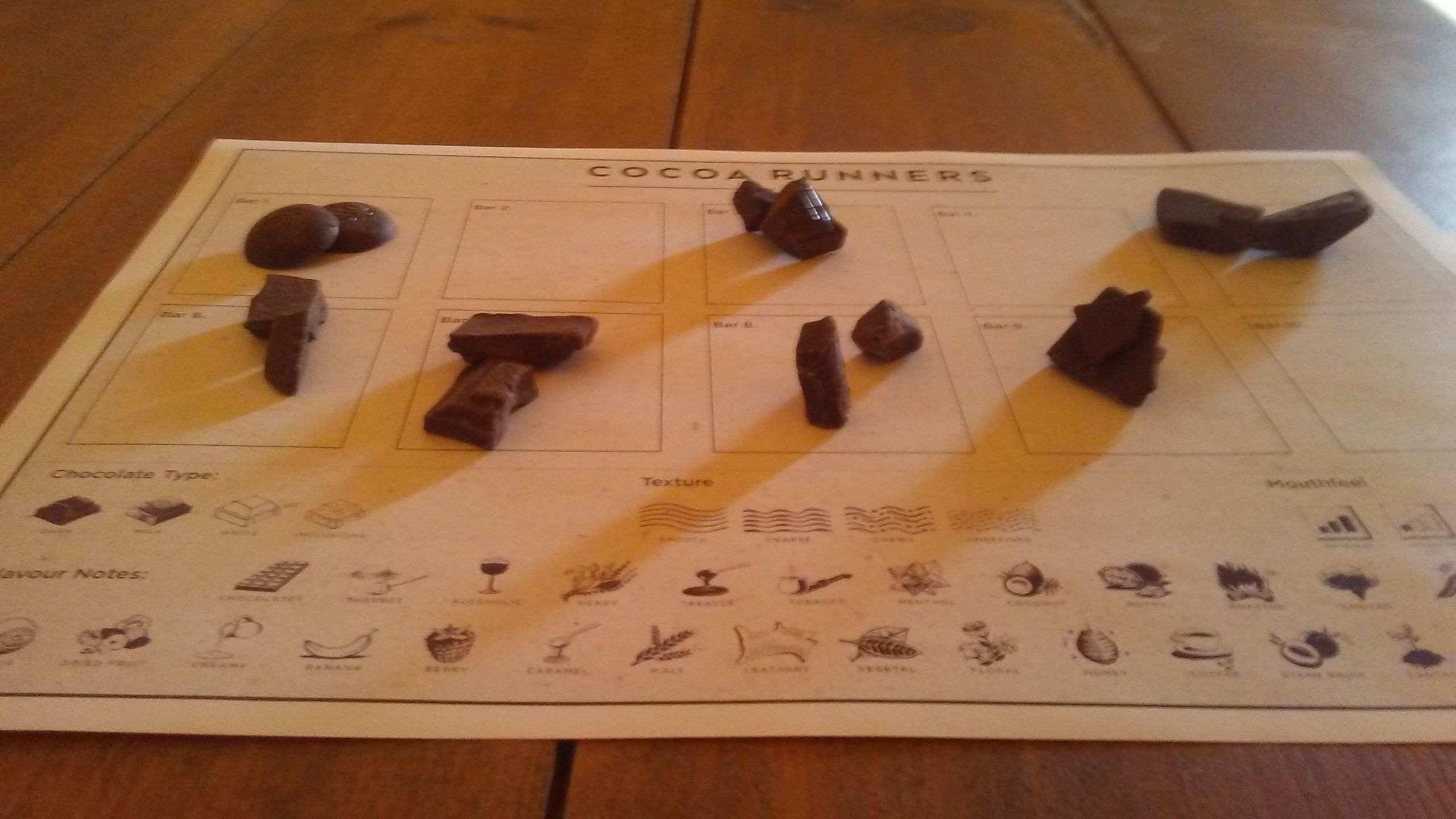 Philosophy and the Senses or the chocolate session, as I like to call it was informative and entertaining and will have you thinking differently about chocolate. This session was very popular with lots of families taking part. Barry C Smith, Anna Drozdowicz, James Ngyuen and Raphael Milliere from The Centre for the Study of the Senses hosted the session and were amusing, as they departed information about our senses and sensory experiences. The session involves experiments with chocolate. There is a worksheet to record your responses. The interesting thing about this session was the idea that we associate smoothness of the chocolate with sweetness. It makes you reconsider the speed at which you eat and how your senses work. The first exercise teaches the difference between commercial and real chocolate this is crucial to the session.

At Lunchtime, the smells from the cooking at the waterfront will beckon you, Burger Me! is located here these burgers are amazing it’s an 8oz beef burger which you can top with applewood cheese, although all food is priced at average festival prices, this burger was completely worth it. With a homemade texture and taste infused with black pepper it is the only thing you will need to eat all day. Relaxing music played out of the speakers in The Waterfront while you eat, you can look out onto the riverbank.

Hugo Hamlet performed in the Bookstore Café, the perfect image of a free-spirit with his blonde hair, light-blue jeans and rainbow colored top. Hugo delivered a brilliant set of gentle vocals, to his melodic guitar playing and curious lyrics, this performance was extremely enjoyable and attention-grabbing people were standing outside the café to listen. The track ‘Dreamer’ was performed perfectly and ideal for easy listening.

Women in Comedy with Helen Lederer was on Saturday afternoon. The theme for the session was The Visibility of women in Comedy, the session was led by Helen Lederer former Ab Fab star who discussed why we need awards to celebrate women’s achievements in the field of comedy. Having recently set up the Comedy Women in Print Prize, a discussion of the visibility of women in comedy took place with comedy interjected into the debate the session was both amusing and interesting, the differences in age gaps between Helen and her guest demonstrated how things have changed. The initial discussion was followed by questions from the audience. The discussion was thought provoking exploring the restrictions on sex, appearance and race within the comedy genre. The audience fully engaged with the discussion and it shed a light on an area we don’t necessarily think about that often. One intriguing theme that was raised was the idea that women in comedy have become increasingly more beautiful and how this is now popular, and that this theme can be applied to all facets of life.

Metaphors of the Mind was a debate session hosted by Hilary Lawson and featuring Marta Halina, Donald Hoffman and Nigel Shadbolt. This was an interesting debate on intelligence and conciseness’s in Artificial Intelligence, themes discussed where will artificial Intelligence excel our human limits in terms of being smarter and complete tasks faster and with more efficiency and the dangers and benefits of this on society. Could they have a conscience. The debate was well led by Hilary Lawson and was interesting although I was surprised two issues didn’t arise the first is just because we can develop artificial Intelligence this, far should we? And if we accept there are many types of intelligence what makes human intelligence special and very important as Marta Halina put it. This was a deeply thought-provoking debate on a subject with lots of consequences to consider.

All sessions at the festival were between 1-4 hours long with a varied range of sessions and entertainment to choose from. There is something for everyone. The programme guide is very detailed with information on events, speakers and artists. Programme guides were also available on tables around the site. The Fast Pass tickets which can be purchased and are priced per session ensure access to your chosen activity.

Director of the festival Hilary Lawson told me that How the Light Gets In began as a way to get people together in a safe and encouraging setting to discuss philosophy. The festival has now excelled this and is an shining example of how a simple idea can challenge and change society, the festival now, perhaps unintentionally is a shining beacon for promoting Philosophy for all, as it demonstrates expertly how anything in life can be explored with Philosophy and how anyone can take part. Achieving all this in a relaxing and enjoyable way.  The festival’s success is partly due to everyone involved staff at the festival were friendly, helpful and efficient adding to the relaxing atmosphere.