We asked Cardiff based International Mountain Leader Alan Ward about Aircraft Crash Sites in the Brecon Beacons. He’d recently visited three of these sites during a National Navigation Award Scheme – Gold Navigator Award Course. For the two-day course Alan trained and assessed four candidates who had previously passed their Bronze and Silver Navigator Awards. Several of these sites involve complex navigation processes to reach them across long sections of open mountain where there are few clearly defined paths. 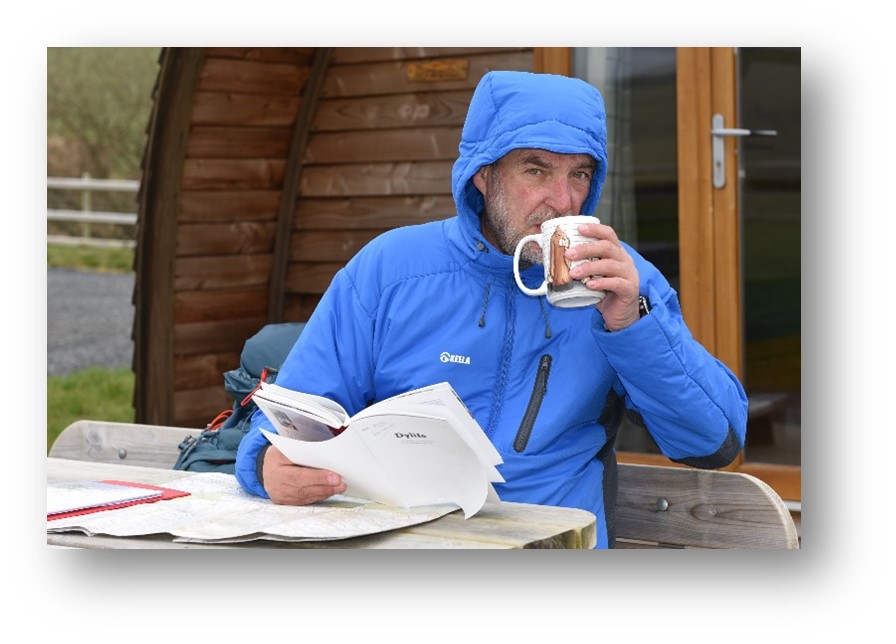 The two-day training and assessment course on Y Mynydd Du (The Black Mountain) started from Dan yr Ogof where an initial briefing was held with all COVID-19 safety guidelines in place for the course and the required syllabus:

The initial briefing included an equipment check for a two-day hike into the remote areas we planned on visiting. Everyone had to be self-sufficient with appropriate clothing and equipment for an overnight wild camp in one of the remotest sites in the Brecon Beacons National Park whilst fully complying with the syllabus:

Crossing Cwm Haffes with heavy packs on was completed safely before climbing up over open and rough ground towards Waun Haffes. The participants were given a location to find the first crash site, Vickers Wellington BJ697 but it took several attempts to find the site which is marked by a small cairn. The aircraft crashed on September 25th 1942. 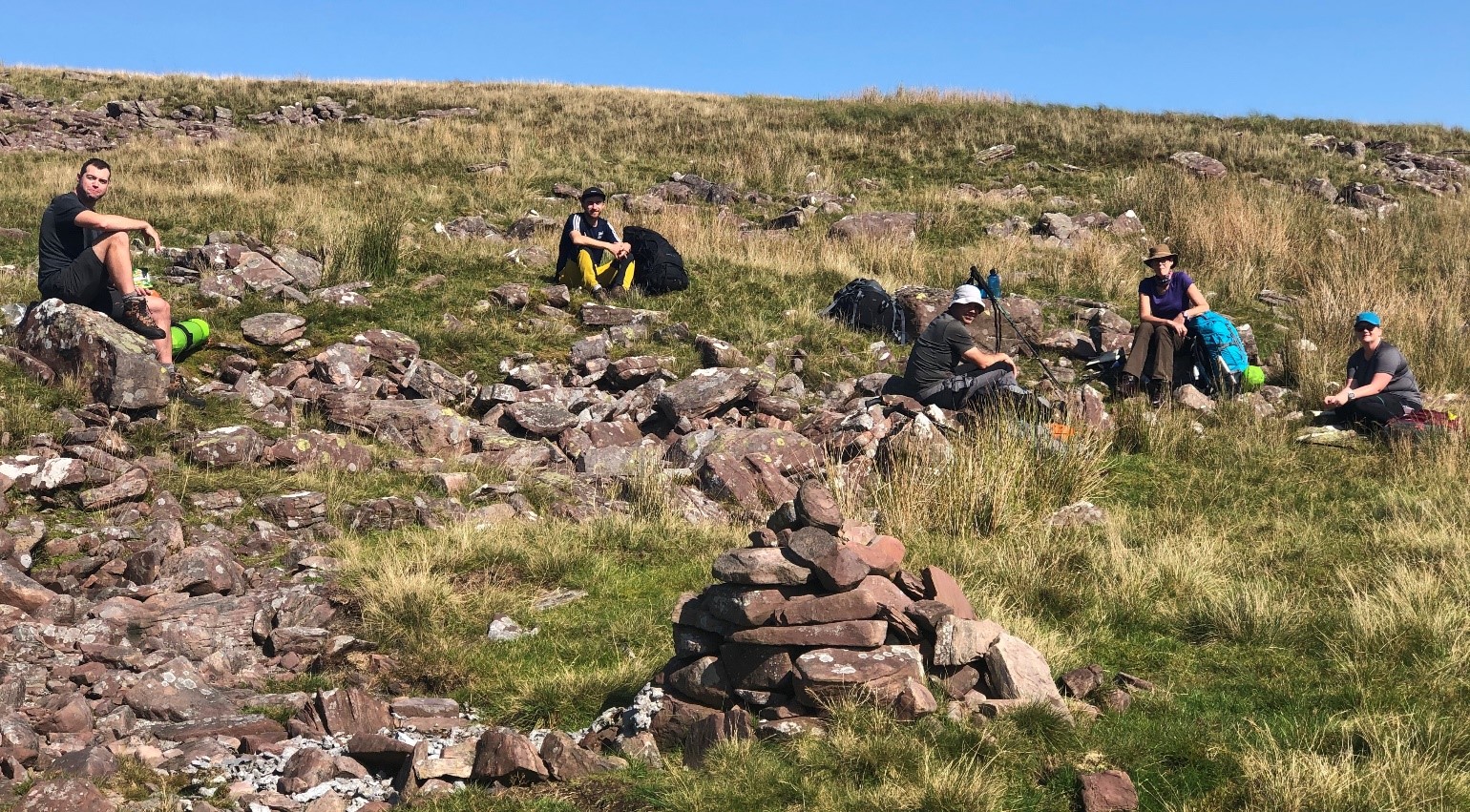 Wellington BJ697 belonged to the 12 Operational Training Unit at Chipping Warden, near Banbury. The aircraft was on a night cross-country training flight when it hit the southwestern slopes of Fan Hir (712m) – one crew member died later, of injuries sustained in the crash.

A long section across open country was required to find the next crash site, De Havilland Vampire VZ106 which crashed on October 9th 1953 and a considerable amount of wreckage at this site still exists. 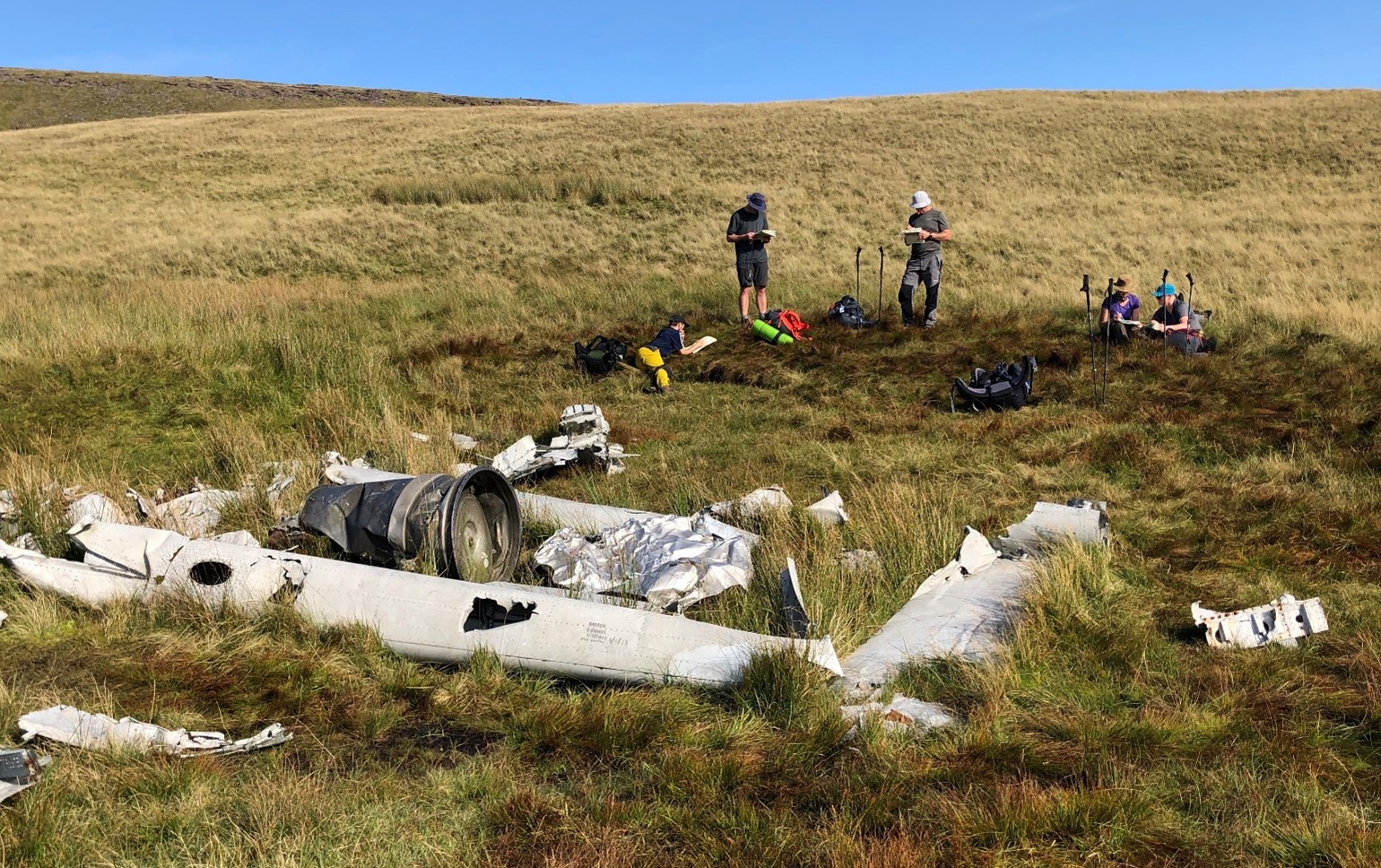 Vampire VZ106 was on a training exercise as it descended through cloud without being aware of the aircraft’s exact position. The aircraft impacted on the western slopes of Fan Hir (712m) – the pilot died of his injuries.

The NNAS Gold candidates did very well in locating two of the hardest crash sites but as it was getting late in the afternoon, we headed over to the remote campsite I’d selected for the group.

Our wild campsite for the night was located at an altitude of 510m and was a site known to me from previous crossings of The Black Mountain. The candidates can be seen preparing for dinner before a planned night navigation exercise which is part of the syllabus: 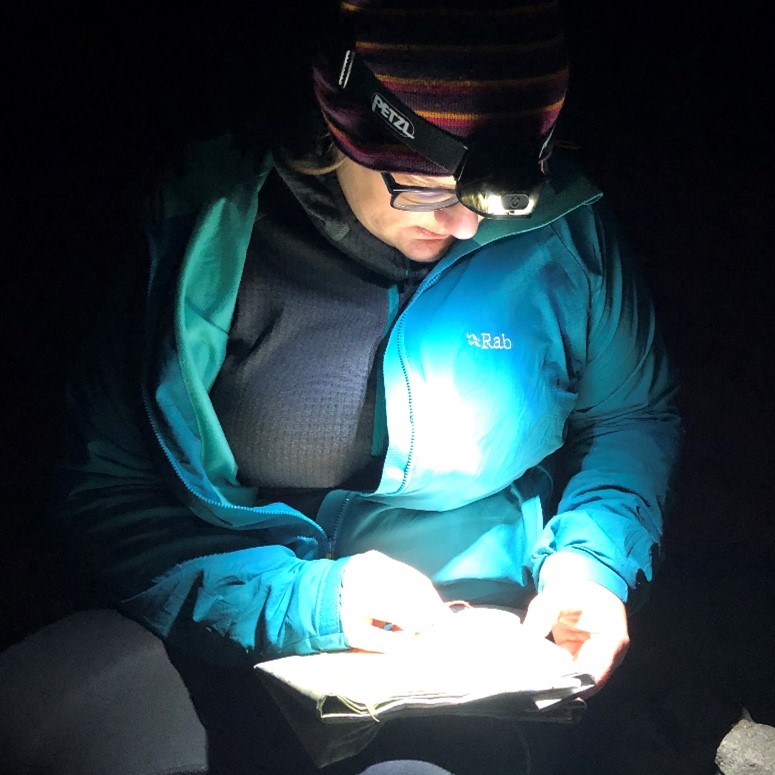 Michaela Chaplin celebrated her 40th birthday on this course – such commitment is to be highly commended! The night navigation exercise was approximately 2 hrs and the four candidates passed to a very high standard. 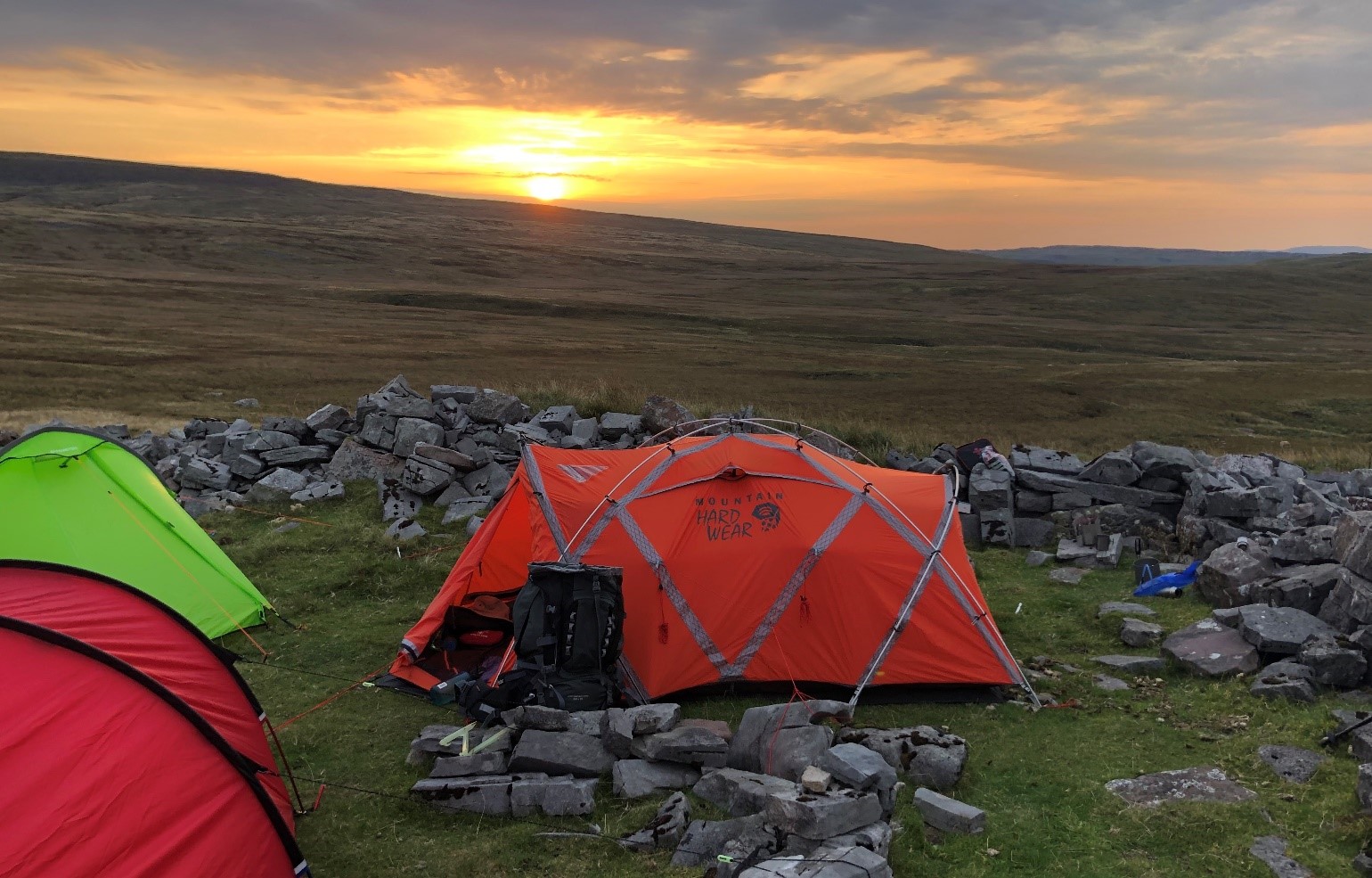 The candidates had done very well on Day 1 so all that remained was to complete the syllabus by finding the third crash site and getting us safely back to Craig y Nos. After breakfast we broke camp and left the area as we’d found it.

Our next crash site objective was to locate Vickers Wellington MF509 which crashed on November 20th 1944 on the western slopes of Carreg Goch at an altitude of 525m. 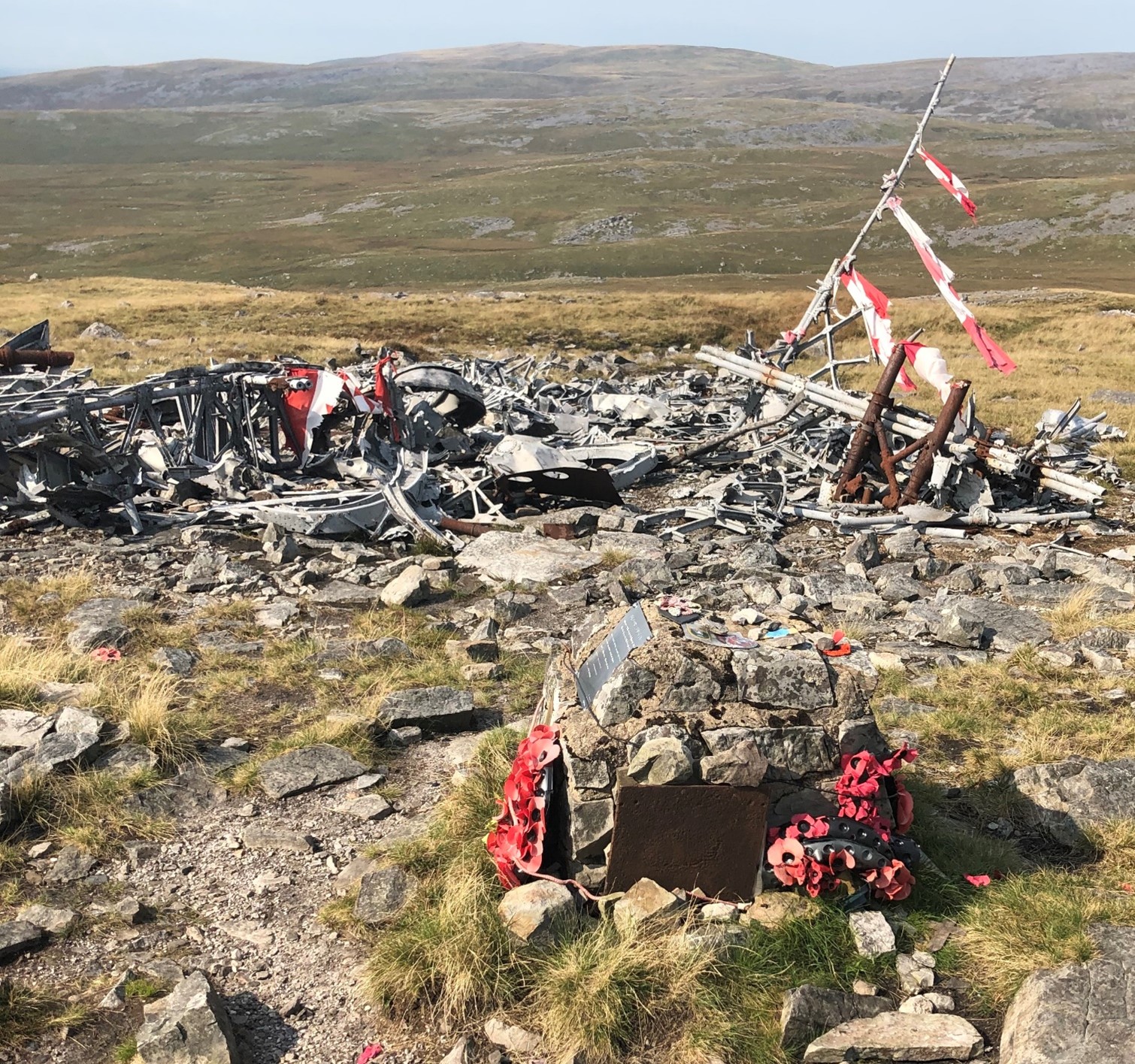 Wellington MF509 was from 22 Operational Training Unit at Wellesbourne Mountford near Stratford-upon-Avon. The aircraft was on a night flying training exercise when an engine failure, combined with ice building up on the wings, caused altitude to be lost in the mountainous terrain with fatal results. All crew members died in the crash in very remote terrain.

From Carreg Goch back to Dan yr Ogof, the candidates practiced their micro navigational skills and I’m pleased to say that they all passed the NNAS Gold Navigator Award.

Many thanks to Simon Chaplin, another NNAS Training Provider for assisting with the delivery of this course. Simon is very local to the area we used and offers guided walks to these crash sites as well as NNAS Bronze and Silver Navigator Award Courses: https://chaplinoutdoorservices.co.uk

Contact Alan for details of any of the courses outlined below – www.bigfootservices.co.uk or email [email protected]