Interview with Dok Haze of The Circus of Horrors 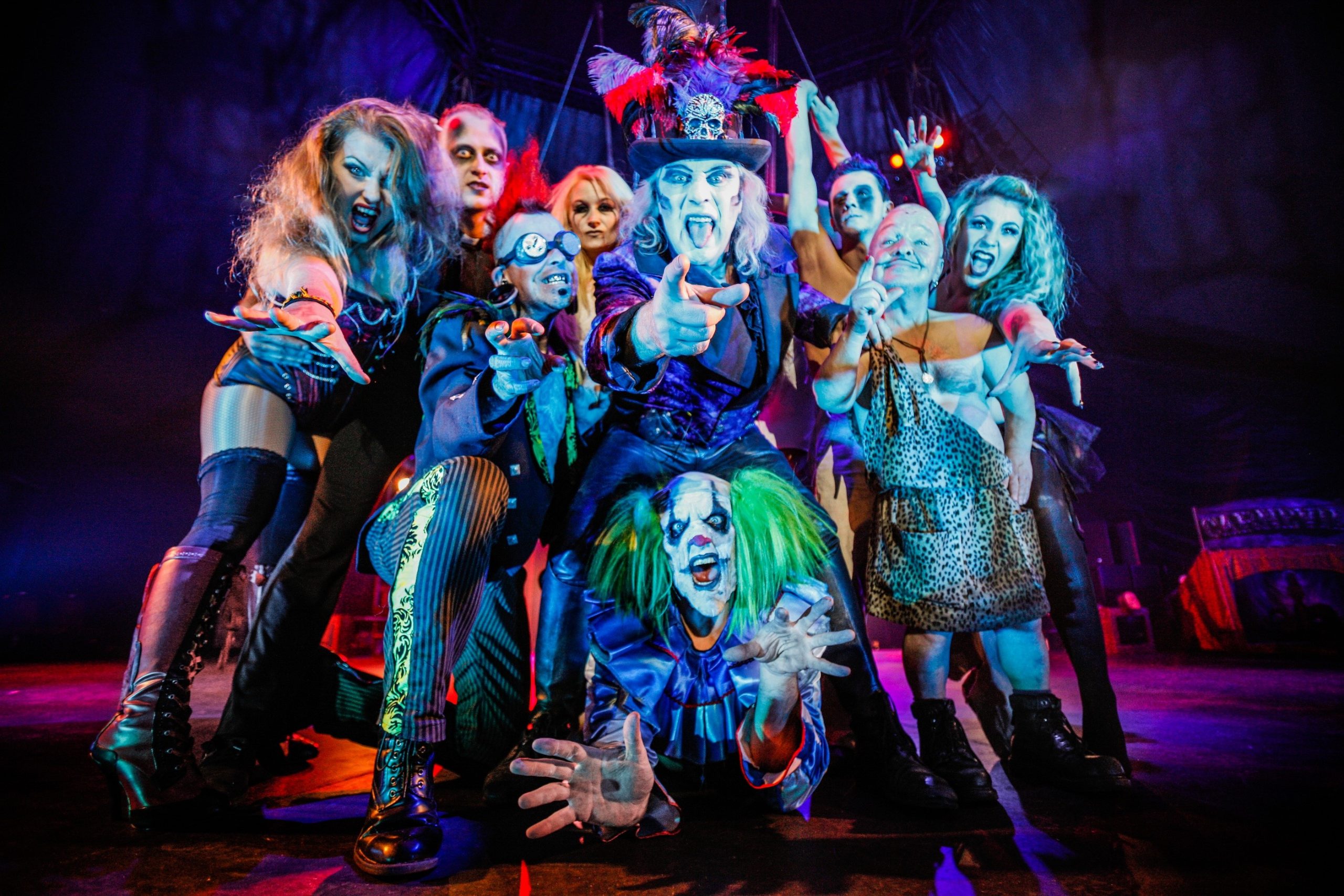 THE Circus of Horrors is back with a wonderfully weird celebration of the beautifully bizarre to celebrate its 25th anniversary in style at St David’s Hall on Saturday 14 March.

After springing to life at Glastonbury in 1995, The Circus of Horrors then reached the Semi-Finals of Britain’s Got Talent in 2011. Subsequently they conquered the West End before becoming household names across the nation’s TV screens on programmes like The X Factor, Daybreak, The One Show, This Morning and Who Wants to Be a Millionaire?

Annually, The Circus of Horrors plays over 100 UK venues and even played a staggering 10 successive nights at London’s O2 Arena. If Quentin Tarantino had directed Cirque Du Soleil, then you would be only halfway there!

Neil Collins chat to Dok Haze – the ringmaster of this gruesome group!

What are your memories of that early performance at Glastonbury in 1995?

They were very raw, but great at the same time. We did three shows in Glastonbury 1995 – the first one had 400 in, the second 800 and the third was full with 1,000 inside and at least 4,000 locked outside. Once the band struck up, there was such a mass surge from people on the outside. Police on horse-back had to move in to disperse the people outside. We knew then we had created a monster of a show!

Over the last quarter-century you’ve rubbed shoulders with the likes of Marilyn Manson, Alice Cooper, Oasis and Manic Street Preachers at festivals. Have you received any endorsements from these huge names?

I had a nice chat with Alice Cooper, who seemed to know all about The Circus of Horrors which was great. In fact, I was with Arthur Brown (as in The Crazy World of…) when I met him, and Alice asked for a picture of the three of us calling us in his words a “Trio of Terror.”

Once again, you performed at Download festival last summer. Having grown too big for the circus tents, is there a big difference between the type of shows you can put on at a festival as opposed to a concert hall and are the audiences much different?

Last year at Download, we were seen by about 11,000 people per show and do different half-hour shows each day because of the amount of people. We tend to concentrate on the bigger acts, but still incorporate some of the “freaky” stuff.

Tell us about how you started The Circus of Horrors? I hear it was the perfect combination of your love of horror, rock music and theatre.

I was born and bred in a circus, so I had sawdust in my veins. In the early 70s, I became a huge Marc Bolan fan and still am to this day. The 70s were also a great time for horror movies with stuff like The Exorcist, Carrie and The Texas Chainsaw Massacre changing the face of horror movies forever. I think it was this combination that inspired my life, and consequently my professional career.

What have been the highlights over the years? Surely performing 10 nights in a row at London’s O2 Arena and receiving national recognition on Britain’s Got Talent must rank pretty high!

I didn’t particularly enjoy Britain’s Got Talent, but accept the higher profile that comes with it. Doing 10 nights at the O2 was great, but so was performing at Fuji Rock Festival in Japan twice and also performing all over the world for all these years.

What rock music, horror films and fiction have inspired the show?

T-Rex, Alice Cooper and Rob Zombie, as well as horror films like The Exorcist and Hostel.

How do you even get into swallowing chair legs and fluorescent tubes, breathing fire and squeezing yourself into bottles?! What is the recruitment process involved? There must be a great camaraderie amongst the group given the unique set of skills you all have in common!

Well, I don’t personally swallow swords! I became a fire-eater at the age of 12. My Dad got us a job in a circus as fire-eaters and I’d never even lit a match, but had to stand in a circus ring and pretend I’d been doing it for years.

What are the most embarrassing injuries sustained onstage? Please keep it as clean as you can!

The most famous was when Captain Dan our Demon Dwarf got his penis stuck in a Henry Hoover in the show while we were at the Edinburgh Festival, and we had to take him to A & E to get it removed!

Are there any tricks that still give you the jitters? And do you find the cast is regularly trying to out-do each other in the craziness stakes?

Not really, but I tend to look the other way when our knife thrower throws her knifes around her husband at break-neck speed!

Your death-defying stunts have seen the show listed several times in The Guinness Book of World Records. What incredible feats would these include?

Hannibal pulled a four-ton truck 100 metres with two meat hooks in his back! We hung a girl on a trapeze suspended from another girl’s hair, who in turn was hung upside down from a crane 20 metres in the air. We also did the world’s largest custard pie fight, and the most amount of naked rollercoaster riders!

Do you receive much scepticism from audiences who may question the legitimacy of your tricks?

We try and prove they are real. For instance, people always think the sword that the sword-swallowers swallow retracts into the handle. Of course it doesn’t, but to prove it the sword he swallows does not have a handle.

I think it’s safe to say that The Circus of Horrors is truly unlike any show the public will ever have seen! How do you explain the success of the show 25 years after its birth? You seem to have achieved widespread appeal considering it’s not for the squeamish!

Basically we live in a very politically correct world, and people want to rebel against that. What we do is take the extreme to the mainstream and at the same time play on psychology that is within us all in that we like to be scared if we know we will not be harmed. That is why we watch horror films, go on rollercoasters and watch The Circus of Horrors!

“I loved it!” Simon Cowell

“The Circus of Horrors completely WOWED the audience” The Daily Mail

“A bloody great night out” The Times

PLEASE NOTE: This show is not suitable for children, but they can be accompanied by an adult who is aware of the content of the show.

May contain nudity and strong language.