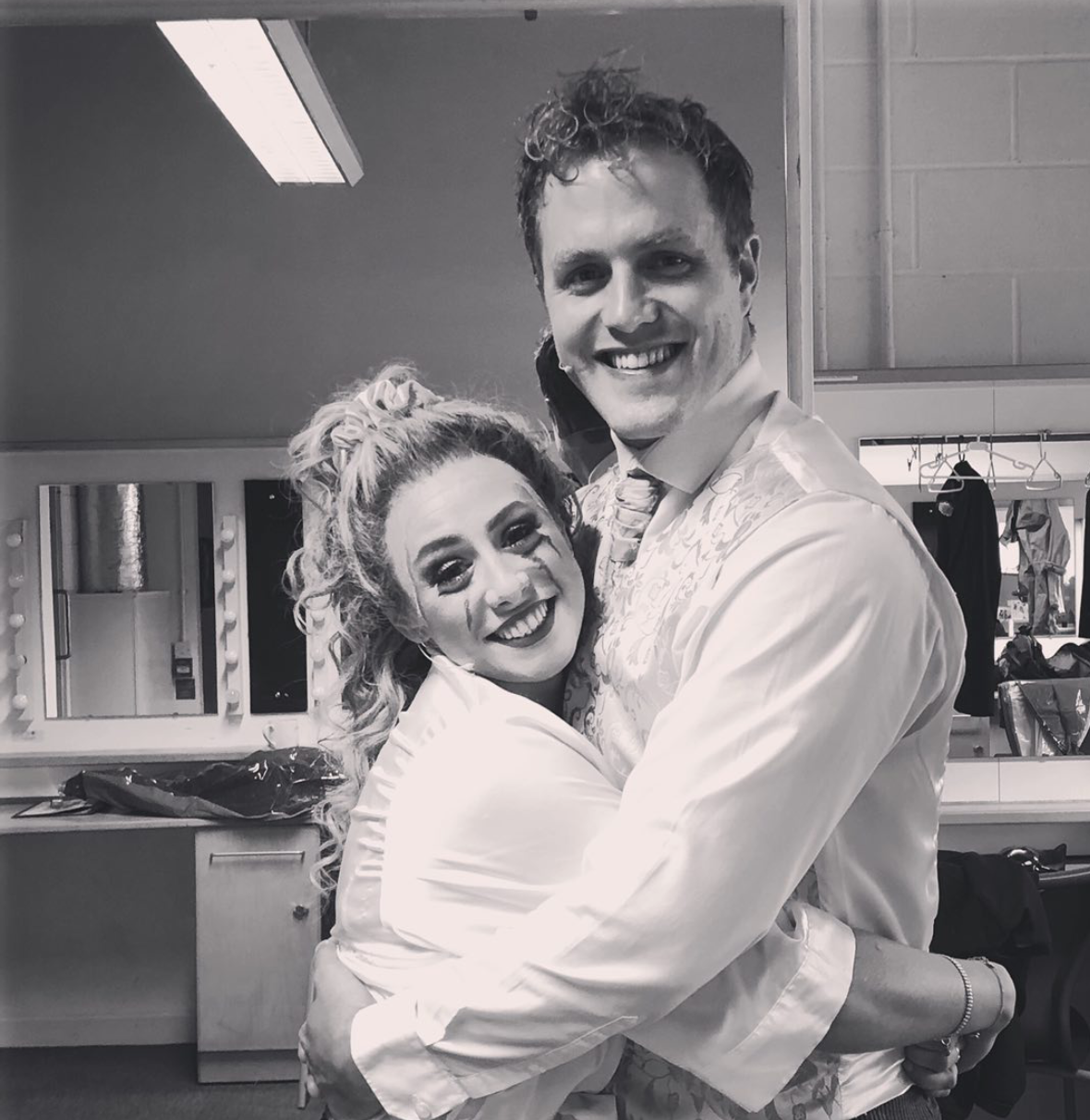 The musical, Club Tropicana, has now finished its run with the final week having just ended at the Wales Millennium Centre, Cardiff.   Everyone enjoys a wedding and the show ends with two couples getting hitched. The younger couple, ‘Olly’ (played by Cellen Chugg Jones) and ‘Lorraine’ (played by Karina Hind) have been impressing audiences with their acting chemistry and astonishing vocal ability.  Casting Directors should take note of these two actors for ‘young couple’ roles in future.  (Dare I say ‘Sandy’ and ‘Danny’ in Grease, which would be perfect for them!)  Cellen rose to fame last year when he was the understudy for Tim Howar, who was playing the lead role of Freddie Trumper in the West End revival of ‘Chess’. Cellen had to go onstage after the interval without a full rehearsal due to Tim’s wife needing an emergency operation to deliver their baby.  He had to share the lead on stage with none other than Michael Ball OBE and sing the classic ‘Pity the Child’ song on his own with minimal preparation.  Fortunately, he did brilliantly and received a standing ovation.  Now both Cellen and Karina are moving into main roles, hopefully this will happen much more.  In fact they now have their own understudies!

I had a quick chat with the lovely Karina and asked her a few questions:

You’re far too young to remember the eighties but did you know the songs in the show and if so, was that through your parents?

Yes, I wasn’t even ‘a thought’ in my parents’ minds in the 80’s but I think everyone knows 80’s music through parents or perhaps through hearing them on holiday.  ‘Girls Just Wanna Have Fun’ was a song my mum played to me. Even my cousins, the youngest being 7, knew the songs,  which is crazy isn’t it! I don’t think it matters what age you are with this show as the songs are so iconic.

For me, the absolute high spot was your duet of ‘Take on Me’ with Cellen.  How did you find singing such a difficult song live?

Yes it’s not an easy song as the vocal range is very challenging, but luckily Cellen’s voice just goes up and up and up! Cellen and I have worked together before in American Idiot and when we auditioned for Club Tropicana we were put together, which we felt comfortable with.  And we worked out a key for the song which suited both our voices.  It’s a great song and of course the ‘torch song’ arrangement is very different from the original version.  I think the ‘Take on Me’ section is beautiful – in fact, it’s my favourite part of the show.

You were in Mamma Mia! weren’t you?  How do you think that musical compares with Club Tropicana?

Yes Mamma Mia! was my first job.  The musicals are completely different in so many ways but there are also some similarities.  Both are light-hearted shows, everyone knows the tunes and we get a similar audience reaction.  In fact, a lot of reviewers have compared our show with Mamma Mia! and quite a few of the cast have been in that show also.

Which other musicals have you been in?

After Mamma Mia!, I did Wonder.Land which was at the National Theatre/Manchester International Festival.  Then I did Ghost and, after that, American Idiot (where I met Cellen).  And then I appeared in Matilda, and now I’m here doing Club Tropicana.  I’ve been very fortunate so far!

How did you find working with Cellen?

I love working with Cellen.  We’re almost like brother and sister.  In American Idiot we were both covers for a couple so we often went on together.  So when we started this show, we had already been through the process of getting to know each other.  We’ve been good friends for quite long time and we’re very supportive of each other.  I’d love to keep working with him.

Did you always want to be an actress and how difficult or easy did you find it to establish yourself?

Yes, I started off doing dance classes as a child and left home at 13 to attend Tring Park School (for the Performing Arts) in Hertfordshire and stayed there to do my A Levels.   Being on the stage has always been my passion and I’m not sure there’s anything else I could do!  As for establishing myself, although it was very young to go away to school, I wouldn’t be where I am today had I not done so. And yes I’ve had negative feedback as all actors have, but nothing too traumatising.

Now the tour has ended, what are you moving onto next?

I’m going away for a job for a few weeks.

How did you find working with the legendary Kate Robbins

I love Kate!  She’s the oldest member of the cast although you wouldn’t think it as she has more of a social life than me.  I think she’s absolutely brilliant and an absolute professional.  And she often comes out with spontaneous humour as we are about to go on stage.  She’s incredible!!