Interviews with Michael Sheen and Mark Atkinson by Carl Marsh

From 27th July to 3rd August, Cardiff’s Bute Park welcomes over 500 players that are representing nearly 50 countries in the 17th Homeless World Cup. I got to chat to actor and activist Michael Sheen, and then with Mark Atkinson, who is ex-Army (Royal Regiment of Wales) and happens to be the Wales team goalkeeper for this event. 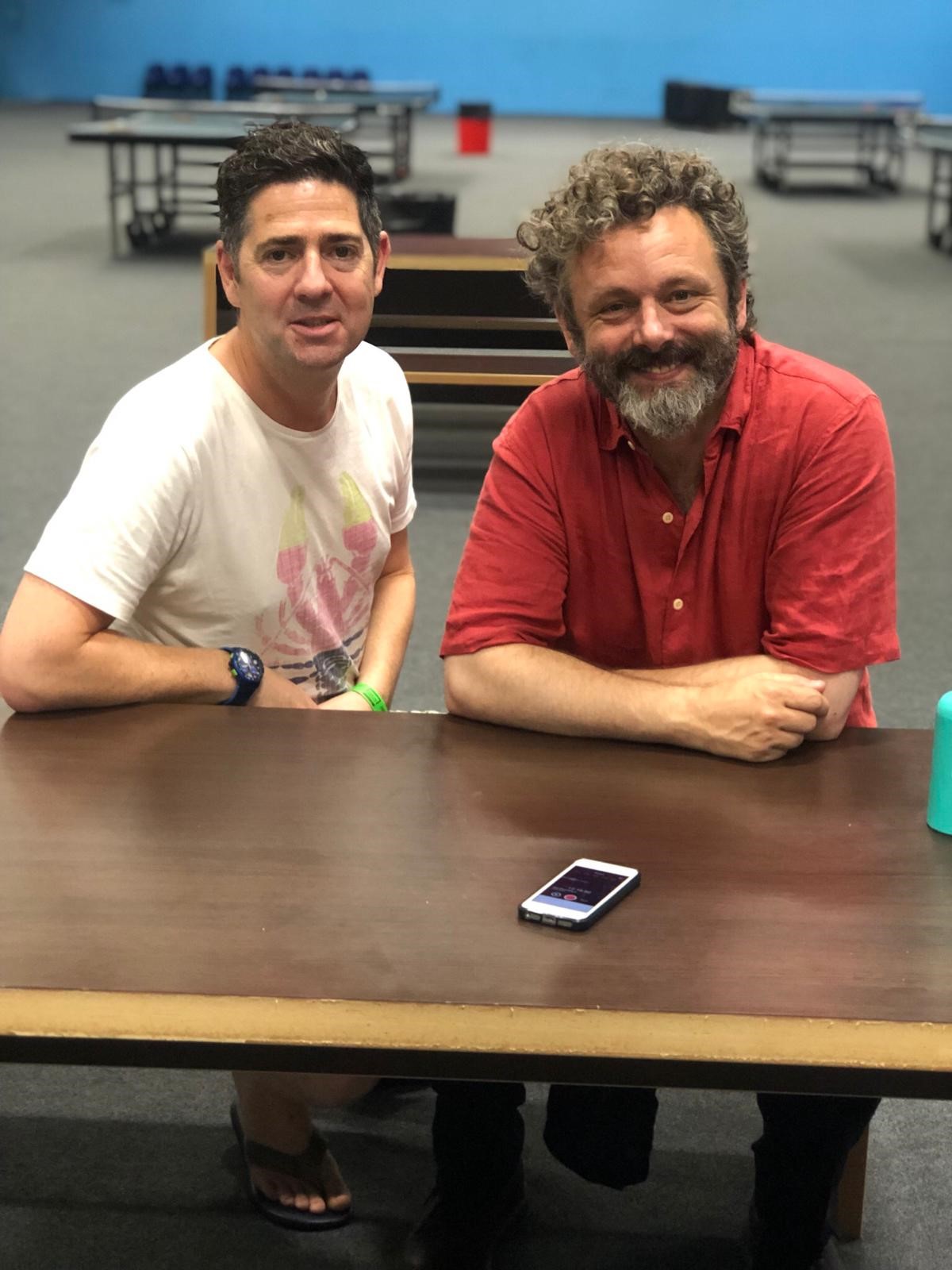 How did you get to be involved with the Homeless World Cup?

I am involved because I was involved with Street Football Wales for a little while already, that was the beginning of it for me. I was doing Soccer Aid, which I had been doing for a few years, by that point, and Keri Harris, who runs Street Football Wales got in touch with me and said: “Would you come down and have a look at what’s going on, and maybe get involved with our organisation”. I didn’t get it, and I couldn’t understand why people were putting money, time and energy into putting on football tournaments for people that are dealing with homelessness, rather than ‘just’ dealing with homelessness. Then I found out more about what they were doing, and I found out that they ‘are’ dealing with homelessness, it was just using football as a means to connect with people and to then get them involved. Football was the hook, and so for some people who it would be very difficult to connect with or access or get services to them, it became a lot easier as they were all coming down to play football. Once they were there, as some of them are the most marginalised and excluded people in our community, they started making friends, making social connections and became part of a team. So instead of dealing with judgement and stigma, they were able to get a bit of self-dignity, self-pride, self-confidence; you could see that it was transformational for people that were coming down who had not been there long, you could see that it was like a foot in the door.

Football was the draw but not the one and the only thing on offer to them?

You could see that it wasn’t all about playing football and forgetting about their problems, longterm it was actually about dealing with their issues. People that have been involved with Street Football Wales for years, their lives have been completely turned around, and I saw how brilliant that was, so I wanted to get involved with that, and then through that I heard about this Homeless World Cup that happens every year because Street Football Wales would put  the Welsh teams forward. I went off to Oslo for that first World Cup that I went to, and that was when I saw the added transformational power of representing your nation, and being part of this international event, and that is when I thought that I would love to be a part of giving this experience to people but also love to bring it to Wales. I  potentially saw that there was the opportunity for it to be a platform for what could happen afterwards, so not only can it be a transformational experience for those taking part but also as a means of bringing people together and looking again at how to deal with homelessness issues.

This event will be a catalyst for a lot of the competitors taking part in previous tournaments or even just playing football with Street Football Wales, what sort of success stories have you heard recently?

One story that really hit me the other day was when I was talking to someone that was involved with Street Football Wales for quite some time, and he said that when things were at there worst for him, he’d come out of prison and been homeless for quite a few years after that, he was dealing with mental health issues, and dealing with addiction issues. He used to spend his time when things were at there worst by just hanging out in Bute Park, and, as I was talking to him, he said to me, “Next week I will be walking back into Bute Park but as the coach of the Wales team. I am talking about Wayne Ellaway, and he also now has a full-time job working for Street Football Wales, he’s got a home, has now got a partner who he met at the last Homeless World Cup in Mexico! His life has completely turned around, he’s been able to receive the support around the mental health issues, and they are all under control. I have a sense that one day he will probably take over Street Football Wales from Keri, eventually. Now that is an extraordinary story.

You couldn’t envisage such a story like that to become real, could you?

Exactly, that’s why I’m committed to this. I have heard stories (like that), over and over, again. When I was at Oslo, I was sitting there watching a match with one of the Welsh Women’s Team players, and we were sharing stories and she had told me that she had been in prison, come out and had been homeless for four years, dealing with addiction issues, hadn’t seen her children for a long time, then she got up to play in a match, and I got to see her score the first goal that she had ever scored, ever, in her life, and here she was scoring for Wales at the Homeless World Cup and I saw her reaction there, she just sort of span, and span, and span and then was back into the match, and I’ve known her ever since and I’ve seen what happened in front of me that day how that has changed her life since. She’s now got a relationship with her kids again, she has got on top of her addiction issues, and she is about to launch an all-women car cleaning company here in Cardiff which I will be going and helping her do a little launch. The other day we were in a school in Cardiff and the mascot, well, she was in the mascot, it was her!

How easy or hard was it to get the Homeless World Cup to be held here in Wales?

We put forward a really good bid and at the heart of the bid was legacy, so it was not just about delivering a tournament, it was about using that as a catalyst for real change afterwards, and I think’  that’s what got the bid through, which was great. It wasn’t that difficult to bring everyone together at that point who were going to be the tournament delivery partners because everyone was on for it, when it gets tricky is when you have to raise the money is the reality but the last few months have been hard work, but we’ve had a fantastic team but to get here today, and seeing actual teams turning up with smiles on their faces, the reality of it is hitting now and it has made all that hard work worthwhile, definitely.

Straight after speaking with Michael Sheen, I was able to grab a few minutes with the goalkeeper, Mark Atkinson, whose life has also been turned around since turning up to play football with Street Football Wales, quite recently. 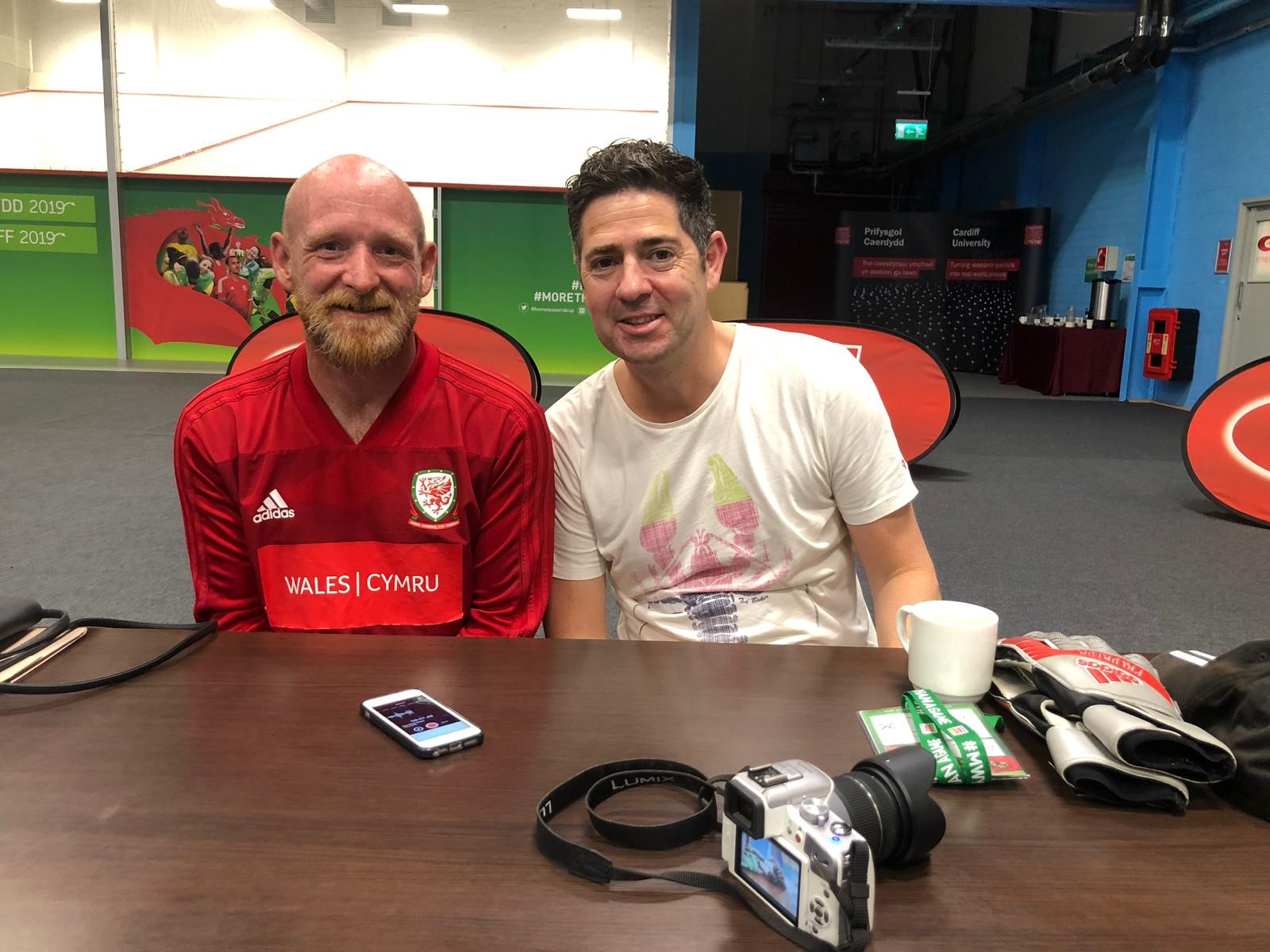 How did you get to hear initially about Street Football Wales in the first place?

I am on a drug and alcohol programme at the moment called the Bridge Program at the Tŷ Gobaith Salvation Army hostel in Cardiff, and the chaplain there asked if I fancied having a kick about one day, and as I wasn’t doing anything, I went along, and I haven’t looked back. Being around people that may have not necessarily been on the same path as I have but on similar paths, I just felt included again. It’s been a good journey with amazing people.

Were you playing football before?

No, I’ve always been rugby. I played a little to keep fit, but I am mainly rugby. The football came along at the right time as I could start to feel a bit complacent with my recovery as I was almost four years sober, and being jack-the-lad and what-have-you, but then being around other people that who are not as far along in their recovery as I am, and then I was like “Oh, rein it in, you’re not fixed yet!” sort of thing. Now we are like a family.

I guess you are helping anyone new to the football by sharing your experiences with them?

We did Constitution Hill (Aberystwyth) last week, and afterwards we were all in a room, and we all had to write a sentence about each individual, and the one that sticks out in my mind, and it gets to me, is one about myself saying that ‘I am a daddy figure, and you can speak to him about anything’. I took a photo of it, and it’s on my phone, so if I’m starting to feel a little bit down, I’ll look at it.

Since leaving the Army, have you had any help from any Military charities?

I get a lot of support from Care after Combat; I was a peer mentor for them when I was in prison as well as being mentored myself. My mentorship finished in May this year and Rob Nickells, who is the general manager (Care after Combat) for all of Wales, he has offered me the role of Voluntary Veterans Ambassador, and I snapped it up! My first official gig, if you like, is going into Cardiff Prison on the 8th August to speak to the Veterans in there, and I will probably know most of them (laughs). I am just waiting on a phone call from the Governor who I know as well. I didn’t know him when I was in there, but I have gotten to know him since I’ve been out, and he is a nice enough bloke, and I am looking forward to that.

What do you want this all to lead to, what is your aim after the World Cup?

I aim to be a peer mentor and use my life experience and the journey that I chose, to help others using my experience of all the things that I did wrong and the things that I did right, so if I can help one person, then it will be ‘job done’. That’s my five-year plan, so I’ve got another four years to go yet (laughs). Life is pretty damn good at the moment.