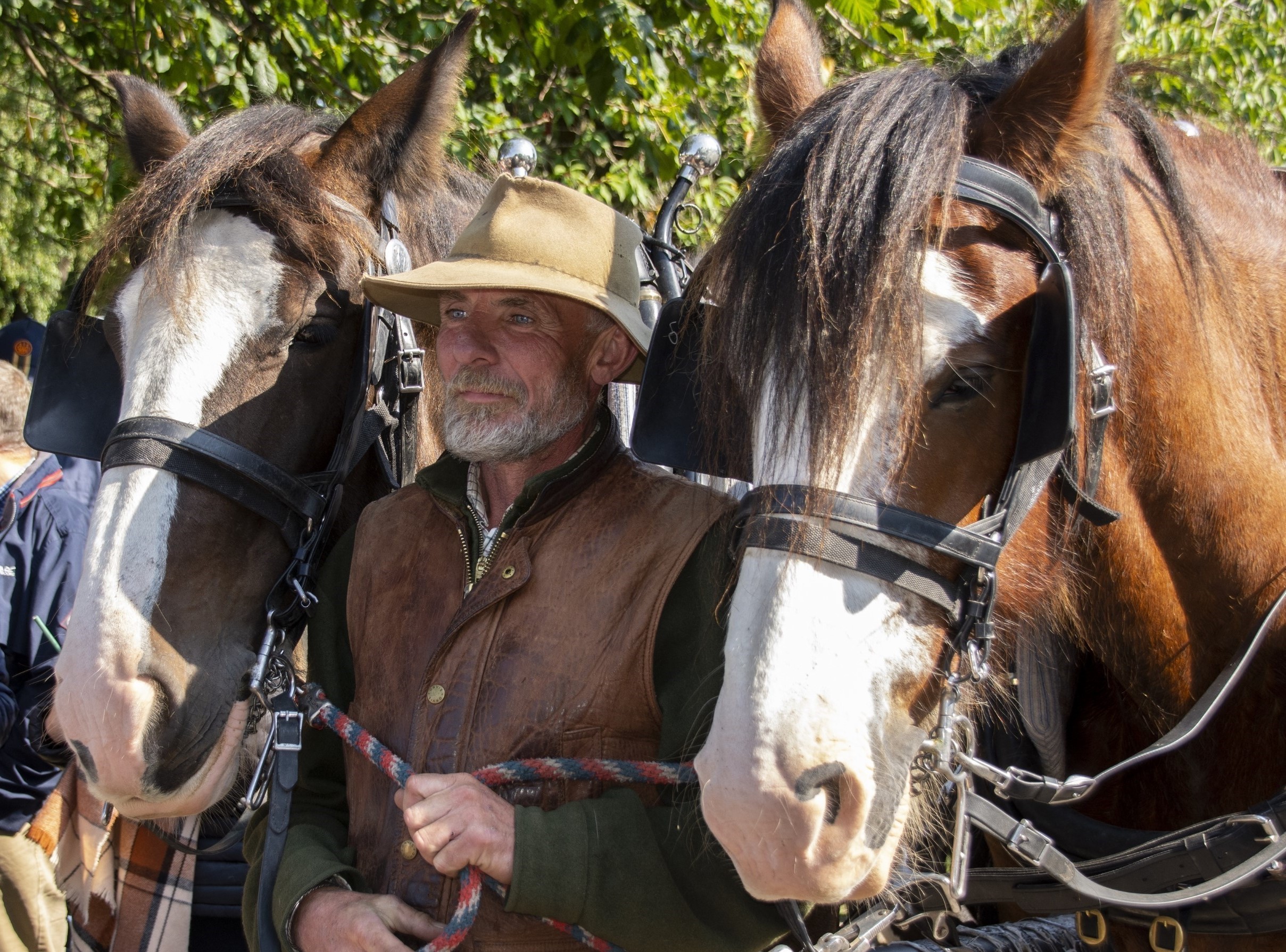 Jamie Alcock, a farmer who drove his Shire horses from his Gloucestershire farm to Elgin in Scotland in 2021 is now taking on a second challenge.

From the 1st June Jamie, his shire horses and farm dog commenced their journey at MOD in St Athan. They are set to complete the 280-mile journey on Monday 20 June at Hampton Court Green in East Molesey. All funds raised are going to Police Care UK, the Royal Air Forces Association and The Shire Horse Society.

The route and times may change, so check https://www.followmychallenge.com/live/cshc-2022 for the latest information.

Jamie was inspired to take on the 2021 challenge in memory of his brother, PC John Alcock who was an officer with Grampian Police, stationed at Elgin in Morayshire. PC Alcock sadly died in 2017, 14 years after being injured on duty in August 2003. He was travelling for his shift on Royal Protection at Balmoral when he was involved in a road traffic accident and never regained consciousness. Some two years after the accident, John returned home to a hospital room that had been created at his house. He received round-the-clock care from two nurses, with help from a mixture of charities including Police Care UK. John was buried with full Police honours at Garmouth, just north of Fochabers.

Jamie chose to also fundraise for the Royal Air Forces Association this year thanks to a strong family link to the service.

Jamie’s grandfather, Wing Commander Richard Alcock OBE, was aircrew during the First World War. He re-joined the RAF as the Second World War unfolded and served until the early 1950s.

His father Flight Lieutenant Chris Alcock flew De Havilland Venoms, Avro Vulcans, Twin Pioneers, Andovers and finished his military career as a trainer. He gained the Martin Baker tie and club membership after ejecting his aircraft on Friday 13 May 1955 over Jordan.

Speaking of his family link to the RAF and flying, Jamie said: “Grandpa was a cousin of Captain Sir John Alcock, who piloted the first non-stop transatlantic flight in June 1919, with navigator Lieutenant Arthur Whitten Brown.

“My father loved his time in the RAF and the friends he made lasted for life. I think he found his civilian flying career somewhat dull compared to the life and camaraderie in the RAF.

“I believe that the support we offer public servants like members of the RAF and the Police is very important and should be available to them no matter how long ago they served. The charities that offer this support are close to my heart. Some pay a price that they carry for the rest of their lives.”

Following the huge success of this event Jamie is taking to the road again to meet new audiences as he makes his way across the UK from Wales to London. There will be plenty of opportunity to welcome and support Jamie and his four-legged friends at various stops on the route which you can follow online on his live tracker https://www.followmychallenge.com/live/cshc-2022/  and on Facebook @coldcroftshires or Instagram @coldcroftshires.

This time Jamie hopes to beat the £60,000 raised last year and will donate 42 per cent of the money he raises to the Royal Air Forces Association, 52 per cent to Police Care UK, with six per cent going to The Shire Horse Society.

Rachel Huxford, Director of Marketing, Fundraising and Trading at the RAF Association, said: “We are very grateful that Jamie has included us in his fundraising, in honour of his father and grandfather, who both served in the Royal Air Force. The money raised through this inspiring challenge will help us continue to be there for members of the RAF community who need us.”

Louise Blair, Fundraising Manager at Police Care UK said: “To be supporting Jamie once again in his second fundraising challenge is an absolute pleasure. Jamie’s passion, enthusiasm and determination to help support our charity is inspiring. We thank you Jamie and your four-legged companions, your support means so much to us and those that we support.”

To donate, you can visit Jamie’s fundraising page at https://www.peoplesfundraising.com/fundraising/shirehorses2022