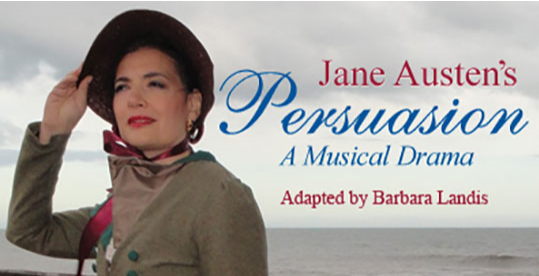 Coming to Wales for the first time Jane Austen’s Persuasion adapted by Barbara Landis and presented by Chamber Opera Tours, treated Cardiff to an excellent performance of the classic novel. The musical theme for this adaptation of Persuasion is Arcangelo Corelli’s La Folia, so it was no surprise that the music was beautifully executed by both the orchestra in the pit, and vocal performances of the cast. The set was simplistic but extremely effective in enhancing the experience of taking this journey through the story of Persuasion told from the perspectives of Jane Austen and Anne Elliot.

Persuasion is the love story of Anne Elliot and Captain Frederick Wentworth, which plays out to the historical backdrop of 1814, with Napoleon defeated and imprisoned Naval officers are returning home comfortably rich, making excellent suitors for women looking for a suitable match. The officers are also improving financial circumstances by renting properties from cash-strapped nobility. These are among the main themes in the musical adaptation. With scenes of Jane Austen both telling the story and commenting on it with her niece and nephew Cassandra and Charles interwoven into the scenes being played out.

Persuasion is an exquisite romantic treat, full of plot twists and changes with a cast that provides flawless and engaging performances to perfection. Particularly impressive was the seamless transition between Jane Austen and Anne Elliot both played by Barbara Landis who delivered a charming, emotional and intriguing performance. The cast also maintained the humor, that Jane Austen infused in her novels. The performance of Jeff Diebold as Captain Frederick Wentworth was stunning especially during the seen where Anne is reading his letter. In the scene he is surrounded by an image of the letter scrolling down as he provides a vocal performance of the content while Anne reads.

Persuasion is storytelling at its best, perfectly adapted to the stage, with a very talented cast, taking us on an immersive, engaging, emotive and romantic journey as we root for Anne as she attempts to reunite with her true love. Every element of this show from the script to the costumes enhances this compelling love story to melt our hearts.

Persuasion was a one-night only show and opened at New Theatre, Cardiff on 3 August 2019.