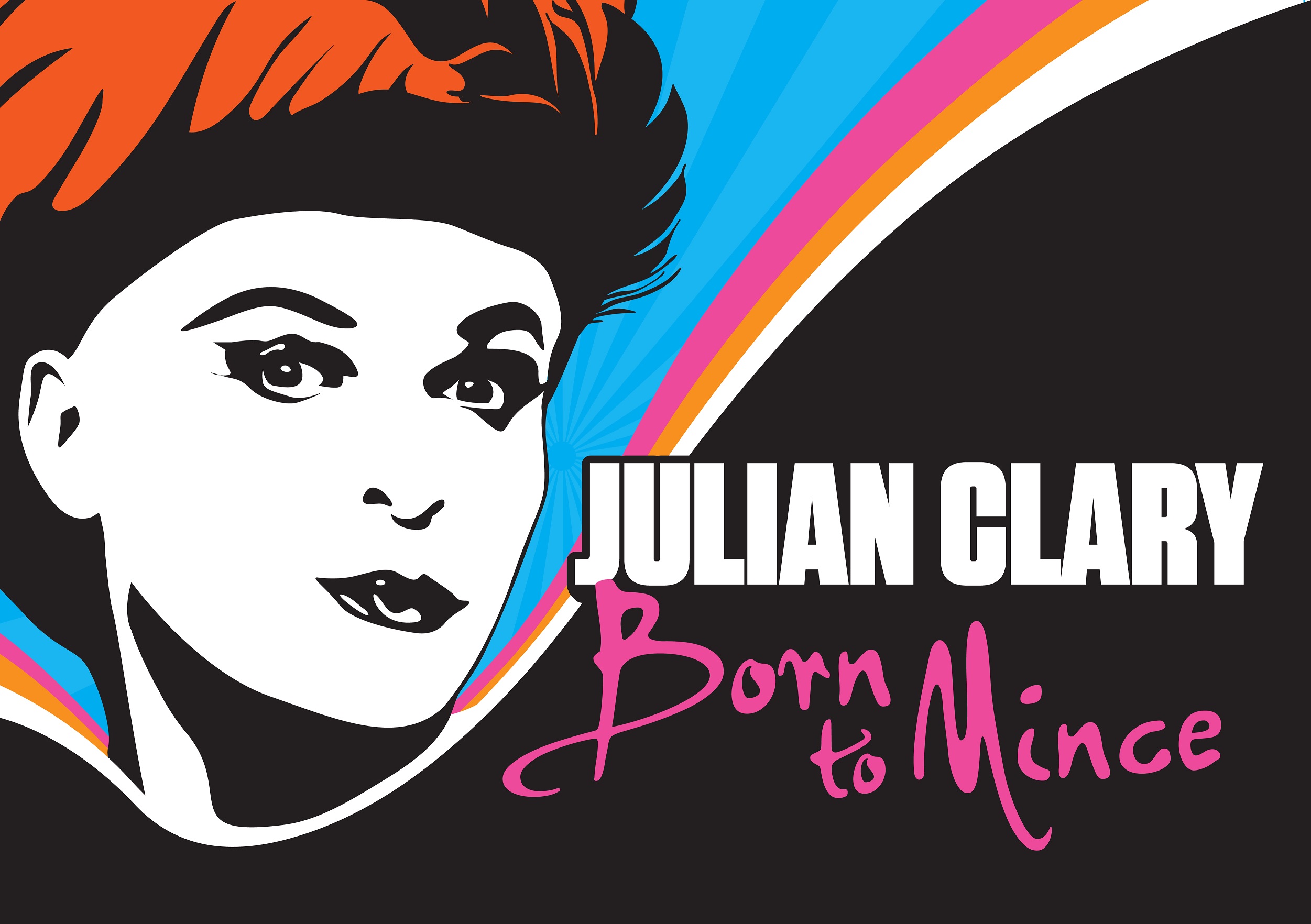 BE WARNED…Julian Clary is back with his filthiest show yet and he’s coming to St David’s Hall on Wednesday 27 March!  Emma Cox chats to Julian Clary, and quickly finds out that no subject is out of bounds…

Let’s talk about your tour first. It’s called Born to Mince, isn’t it?

Yes. The last one was The Joy of Mincing. Before that was Natural Born Mincer, Lord of the Mince, Mincing Machine. You get the general idea. I just like to get “mincing” in the title. I like the word. Mincing, mince, in any formula.

It’s only three years since your last tour. Why did you want to do another so soon?

Because I miss it, and what I have to do with my life is rotate various activities. So writing children’s books is lovely, and I really enjoy making children laugh, but a part of me wants to talk filth and I’m not one for depriving myself of that pleasure.

And how do you feel about the writing process?

I like the process. It gathers pace. The quality of the writing gets better as I get closer to it – through fear probably. The best stuff will probably rise to the surface when I’m in the car on my way to the first gig!

I wake up in the night. The brain is a funny thing, you know. A random, completely formed 20-minute section just comes to me just before dawn. Why is that?

So you wake up in the middle of the night and have to scribble this stuff down?

I do, much to my husband’s annoyance. In fact he doubles as my secretary so I dictate and he has to wake up and write it all down. He’s also my gardener, housekeeper and nurse.

And how do you enjoy actually seeing fans in the front row. Is that part of the pleasure for you?

It rather depends on what they’re wearing. It’s a spring tour so I’m hoping for some cheerful floral print dresses with maybe a light pashmina. That’s just the men…And did you know one in five of the general public are mad? I have to be careful who I hold eye contact with. Among celebrities the percentage is higher – more like one in three. Have you ever interviewed Richard Osman? Barking!

Let’s talk about the outrage. Obviously you get a kick out of getting people to gasp?

It’s one of life’s pleasures, in my opinion. They want to see if I’ll go too far. It livens up their otherwise dreary lives I expect. It gets the heart rate going, much like fairground rides or watching a horror movie.

Was this truer when you started out in the 80s?

Yes because prejudice, ignorance and fear were rife back then. I felt if you talked about the mechanics of gay sex it would be shocking to them, but it would demystify it. They would leave better people than when they arrived.

You said people are less easily shocked, but they are also more easily offended these days. Does this give you a different challenge?

It’s funny. Last night I wanted to put something on Twitter. It was about the Duchess of Sussex being pregnant. My husband said, “Yes, but who is the father?” And I thought, probably years ago I could’ve put that on Twitter and we’d have all chortled. Now, I thought, “Well, I just can’t because it’s going to cause outrage.”

There’s this new word, “snowflake”. I would blame social media I think, where there’s people who spend all day arguing. Be very careful what you say.

And why do you think you now care if it does cause offence? You used to court controversy.

It’s different. It’s a different sort of controversy. If it was really controversial that I was an ‘out’ gay man on television, then that’s something that I would feel more self-righteous about. Implying that the Duchess of Sussex is putting it about is probably not true at this stage of their marriage! So I can’t really feel self-righteous about that.

Although your humour does sometimes make people gasp, it’s also harmless and lovely and warm. Do you think that’s a fair description?

I think so. I’ve been around the block a few times and if people buy a ticket to see me, chances are they quite like me or they’ve been before. So there is a warmth and affection, but there is a sort of expectation of the boundaries being pushed a bit. So I’m happy to oblige!

How much audience participation would there usually be in your shows? Should people avoid sitting in the first five rows?

No, because I wander around now, so you’re not safe anywhere! I’ve always found people’s lives are more interesting than mine, and so I’m interested in talking to people and improvising.

I did a straight play last year, Le Grand Mort, and it was really enjoyable. But I really had to stop myself from talking to the audience. It was in a very small theatre at Trafalgar Studios. I wanted to talk about someone’s hair and their handbag and the shoes they were wearing, and you just can’t apparently. I’m told that, when acting in play, you are expected to say the same words in the same order every night. Who knew?

I had to stop myself from seeing the audience whereas I’m very alert to them when I’m doing my own show. It’s such freedom to be able to say what you want, and maybe go down a blind alley, or create a bit of comedy, magic perhaps if you’re lucky and the wind’s in the right direction. I do like it more than anything.

And yet there’s a line in the press release which says “this might be the final mince.” Are you thinking of retiring?

Yes, it was rather lame of me to say that but I suppose it’s because I am 60 during this tour. I’ll be in Bury St Edmunds and I can’t think of anywhere I’d rather be for my birthday than on stage in Bury St Edmunds. And I do think it might be the last one. Because at what age does it become inappropriate to talk about things that I talk about?

I also wonder, would people want to see much more of me? I’m quite drawn to the idea of being a recluse. I’ll lock myself away watching Cash in the Attic and live in filth.

Are you very different in real life than your stage persona?

Yes, thank goodness! If I don’t become a recluse, I’m quite fanciful of a change of direction when I’m 60, doing something different. I think it’s important to stretch yourself.

But what I don’t want to do is say “This is the final tour” then everyone will say, “Oh I’d better go and see him before he dies”, and then five years later I’m back. I always feel slightly conned when people do that.

So what I’m thinking is don’t be surprised if it is my last tour, but then again, the old age mincer might be coming your way in five years’ time…If I’ve got a tax bill I can’t afford, or my husband has run off with Christopher Biggins!

In the meantime you’ve just done panto again. Why do you like it so much?

It’s kind of a perfect hybrid between stand-up comedy and storytelling. You’re allowed to step out of the scene and comment, and I’m allowed to talk about someone’s coughing. I’m allowed to pick on the audience. It’s a pity they let children in, but you can’t have everything!

I like being part of a big ensemble and these shows are very lavish. I had about 13 costumes this year and they weren’t made by the costume department, they were made by the scenery department because they were so huge. You could just see my head poking out the middle.

Do you enjoy the actual travelling part of touring?

Yes, I tour with one tour manager and we travel together. Bertha has done my tours for the last 25 years. She’s the only driver that I’ve ever had where I’ve dared to close my eyes, because I’m a very nervous passenger. So we know each other really well. I trust her, and we have a laugh but I don’t have to make small talk either.

I like being in a different town each night, a different theatre. I never get bored because it’s always really “Harrogate, hurrah!”

Do the audiences vary hugely depending on where you are in the country?

Yes, they do. The rumour used to be that they’re more extroverted up north, and they’re more sitting with their arms crossed in the south, but I don’t think that’s true any more. You never know how it’s going to feel.

Is there a particular favourite town or city?

Glasgow. They’re so funny, so witty. And they heckle, which I’ve always liked. I love everywhere I’m going, or I wouldn’t go there, and the Palladium will be special. Cardiff – St David’s Hall – that will be lovely. Harrogate’s a beautiful theatre.

And how do you feel about heckling?

I think if you’ve paid for your ticket, you can do whatever you want. I often have a set-to with the theatre staff because people take photos, and you see the ushers creeping down the aisles and wagging their fingers telling people they can’t, so then I go down and say “yes you can” and pose for photos with them.

Of course you can take a photo, you paid £25! I mean, why not? It’s not a Chekov play! You can eat, drink, take photos, you can shout out.

Do you have any other unfulfilled ambitions that you haven’t done yet? Other than the straight acting that you mentioned earlier.

I quite fancy doing another volume of my autobiography. I want to call it A Night at the Lubricant. I spent weeks thinking up funny titles. My last autobiography finished in 1993, so there’s a lot to say.

Are you happier now than you were in your 30s?

Yes, and I think that’s the compensation for getting older, isn’t it?

Born to Mince is the outrageously camp new tour from the national treasure, bestselling author and beloved TV personality. Julian murders some well-known songs along the way and is guaranteed to hurl withering remarks at anyone foolish to sit in the front row.

Plus, there’s the usual array of scandalous stories not fit for publication in this Press Release!