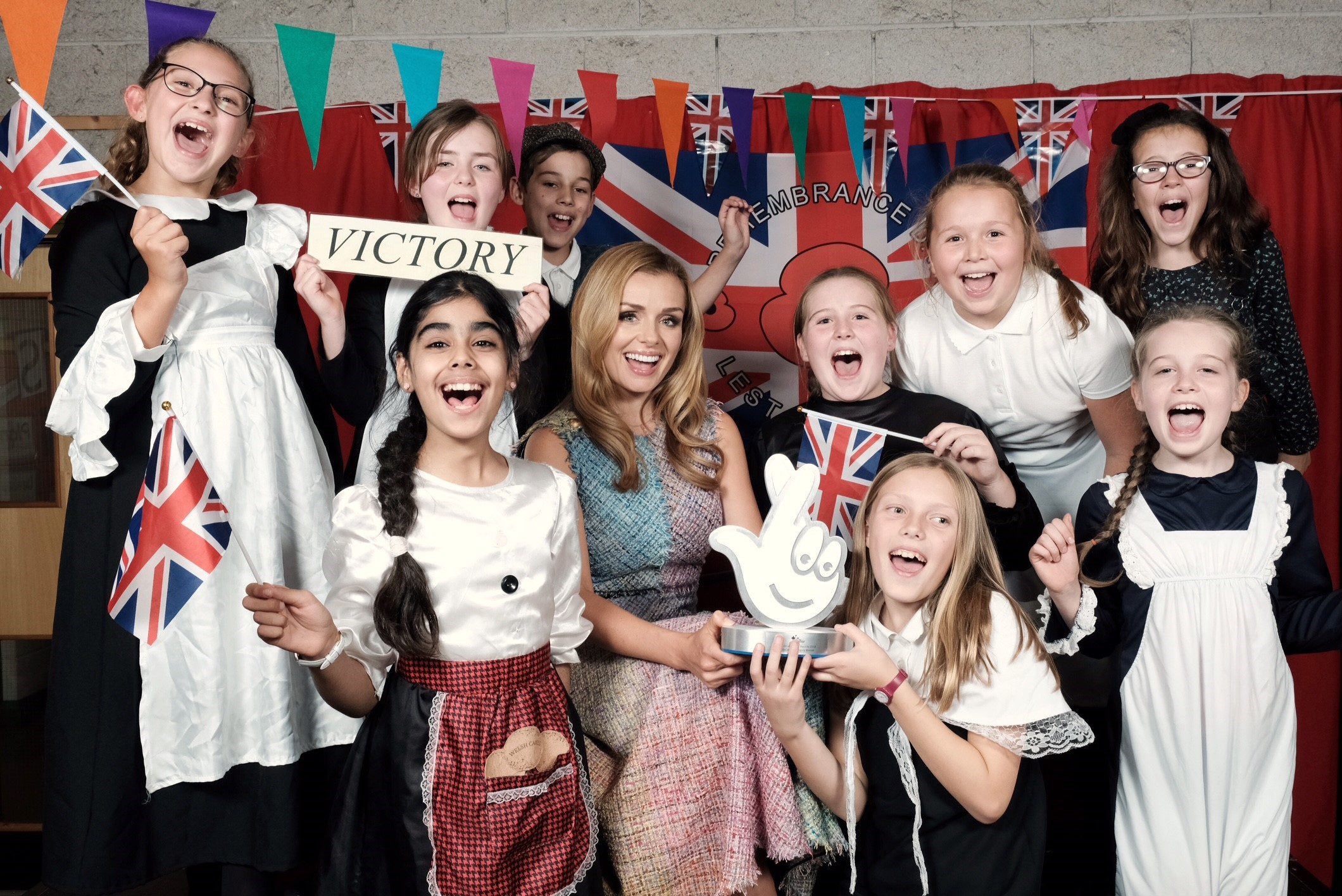 Force’s Sweetheart’ and Welsh classical singer, Katherine Jenkins, presented the National Lottery Award 2018 to the Armistice Cantata project in Cardiff.  The project is an intergenerational collaboration between pensioners from Goldies Cymru and the children at Thornhill Primary School. The announcement was made to them on Wednesday 12th September in front of BBC camera crews.

The doors to Thornhill Primary School were open far later than usual on Wednesday evening, and the mild September day contrasted with the excitement within the building where children, parents and staff had just received a jaw-dropping surprise.

Katherine Jenkins, Wales’ most-loved classical singer, was the bearer of the good news for those involved with a project known as the Armistice Cantata. Katherine presented them with the Best Education Project in the National Lottery Awards 2018. The project beat 700 other entries and they are set to receive £5,000 plus the iconic National Lottery Awards trophy.

The members of this project are part of Goldies Cymru, a charity that organises singing sessions and events for pensioners, and pupils from Thornhill Primary School. The Armistice Cantata is an inter-generational project that commemorates the centenary of the end of WW1. A musical created by members of Goldies and the children themselves, it is now also available to download for other communities and schools. Currently there are 7,000 children and 800 older people from the Goldies charity taking part. The success of the project and its unique approach to remembrance, education and legacy make it an obvious choice for such an award.

Paul explained that the process of developing the project involved trips to the Glamorgan Archives, researching stories that were linked to the war, listening to soundtracks from the period, and writing lyrics. Paul, as headteacher, was the first from the school to hear that they had won award and said he felt “really proud”.

For Katherine Jenkins, who is releasing her new album ‘Guiding Light’ and will soon be touring the UK, this moment was special for many reasons. Thornhill Primary School is the only school from Wales in the award categories, and as a Welsh born-and-bred singer her pride was evident. It was also a trip down memory lane and Katherine said, “it totally made me think about my childhood and doing school productions, and the buzz that you get out of doing things like that with your parents in the audience”.

Speaking to Euan James, age 10, whose proud mum was in the audience that evening, the reaction to the announcement was one of shock. Euan explained that the hardest part of the project was before a concert when “you’re all nervous.” The high point for young Euan was winning the award, which, for the children at Thornhill, was the ultimate recognition of their hard-work.

Katherine’s advice to those pupils who are passionate about performing, but who also get nervous like Euan, is to keep taking part in similar events and projects to develop “performance skills, experience and confidence”.

The consensus in the room was that projects like these are extremely important. Katherine stressed that, “we always need to be recognising the arts; something like this is inspiring children to sing and to write music”. The children, faculty, and the members from Goldies Cymru are a testament to the importance of funding for the community and the arts. The school are already keen to try their hand at more creative projects, and we will undoubtedly hear more from them in the future.

National Lottery players raise £30 million each week for projects related to arts, sport, heritage and community good causes. The Armistice Cantata Project will be celebrated on a special BBC One programme on 26th September.