Katie competes at the World Triathlon Championships in Rotterdam

Katie competes at the World Triathlon Championships in Rotterdam

Dr Katie Greenwood, who is currently in her seventh year of training and working as a Paediatric Intensive Care Unit Registrar at the University Hospital for Wales recently competed for her country at the World Triathlon Championships in Rotterdam.

Katie has demonstrated that as well as working hard and training in paediatrics and developing her career, it is possible to compete in world class sport outside of the workplace.

Katie said: “Alongside working hard as a paediatric trainee, I have developed a passion for competing in triathlons and have participated in a number of challenging races across the world.  Following my achievements in this sport, I was selected to compete for Great Britain, at the 2017 World Triathlon Championships in Rotterdam in September. I was absolutely delighted to finish 11th place overall in my race.”

Katie went on to say: “I certainly feel my success within triathlon has helped create an ethos of enthusiasm amongst my colleagues, encouraging others to pursue their out-of-hours passions and interests. It has given me the perfect opportunity to wave the flag proudly for paediatric trainees in Wales on an international stage.” Some of Katie’s other achievements are:

Rachel Burton, Director of Operations for the Children and Women’s Clinical Board said: “What a great achievement! I’d like to congratulate Katie on competing at such a high level while undertaking her training in paediatrics.  It’s great to see her inspiring her colleagues to embrace their passions and interests and I wish her luck in her future career, both in paediatrics and in triathlon.” 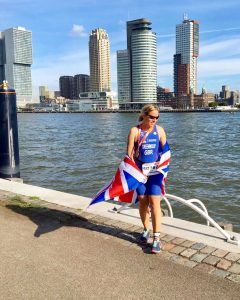