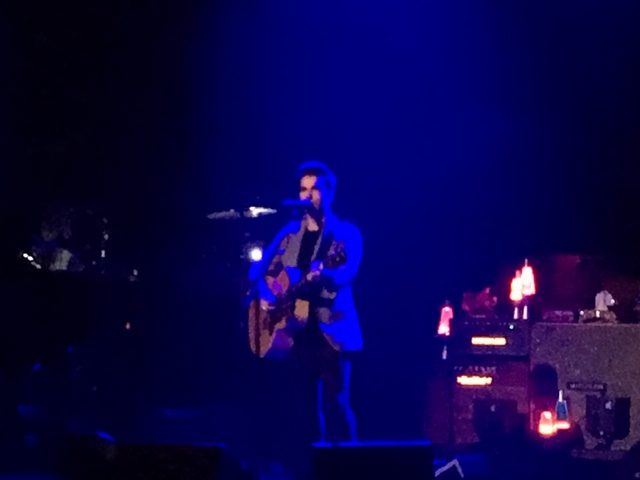 Stereophonics frontman Kelly Jones recently played a rare and intimate solo concert at St David’s Hall and we were privileged to attend.

Looking around at the fans in the bar before the performance started revealed a variety of ages, which was testament to the fact that Kelly’s music is both relevant and timeless.  This is the first concert I have ever attended where the fans were so friendly and welcoming – especially the lovely gentlemen from Port Talbot who offered to pay for my drink because my card temporarily malfunctioned (luckily it worked on the second attempt!)  There was a unified atmosphere and it felt like we were one big happy family.

Kelly walked out onto the stage in his usual calm casual manner, which affirmed how modest he is. Over the course of the next two and a quarter hours, he treated the audience to songs both new and old spanning  his 22 year career with the Stereophonics, interspersed with telling the audience funny and touching stories from his youth that have inspired him and helped him break through obstacles.  His unique voice never faltered throughout the entire set, and still sounds the same as it did when I saw the Stereophonics play their iconic gig at the old Morfa Stadium in Swansea way back in 1999!

About an hour into the concert, Kelly recounted the time he wrote a song for his good friend and past Stereophonics member Stuart Cable, who sadly passed away some years ago.  The lyrics ‘I miss you man’ screamed out to the audience.  The anniversary of Stuart’s death was on the very day of the concert, 7th June, which made the song even more poignant.

As Kelly told the crowd he had written approximately 160 songs, he then laughed because he’d lost count of the exact amount.  The amount doesn’t matter that much, it’s the quality of the song writing that counts, and his lyrical story telling is one which can touch the listener in a variety of ways.

The musicians who supported Kelly were multi-talented.  Gavin Fitzjohn played the piano, guitar, trumpet and ukulele, whilst Fiona Brice played the violin and piano. The drummer Cherisse Osei had so much passion, infusing a contagious rhythm as she played the drums and making the audience want to jump to their feet.  Kelly had so many guitar changes I lost count, but he too switched from performing with acoustic guitar to the electric guitar followed by the ukulele then onto the piano.

The audience were respectful of each other and sat in their seats until the Encore, by which time the fans could no longer contain their excitement and made their way to the front of the stage.  Waving hands in the air, fans sang along to classic Stereophonics songs Traffic, Step On My Old Size Nines, Maybe Tomorrow and the anthemic finale, Dakota.  The atmosphere was electric at this once in a lifetime event and I will remember it for a long time to come.

Kelly comes from a third generation of singers. His Father and Grandfather were both performers, and he performed a touching song his dad used to sing to him, Help Me Make It Through The Night by Kris Kristofferson.    We also got to find out how young he was when he first started to write songs. At the age of 9 Kelly would get into the bath after his brothers. They’d always leave him in a pool of dirty water after playing rugby and then to make things even worse, they’d take away the Ghetto Blaster that Kelly was singing along to.  Whilst Kelly was in the bath, he’d start to make up lyrics, which was the beginning of his journey from a boy growing up in the small village of Cwmaman, to the global singing star he now is.

The honesty and truth of this concert was astounding, we got to see the real Kelly Jones who hasn’t let fame change him.  He was so down-to-earth, and his personality shone, and may it continue to do so throughout the rest of his musical career.