Laura Ford riffs on the castle’s fabled past

Laura Ford riffs on the castle’s fabled past 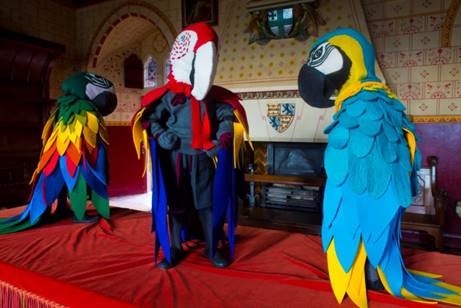 Laura Ford unveils a series of new sculptures inside Wales’ iconic Castell Coch, as visitors are invited to discover over 20 works created by one of the UK’s leading contemporary artists.

Commissioned by the 3rd Marquess of Bute in 1870s and built by William Burges on the foundations of an original 13th century fortress, Castell Coch is either a Gothic fairy tale or a monument to medieval endurance, depending on your romantic inclination. Seen by many as an architectural folly, Laura Ford riffs on the castle’s fabled past to imagine a new generation of anthropomorphic inhabitants.

A meticulously handcrafted rabble of otherworldly interlopers are concealed and revealed within the castle’s architecture as figures appear cloaked, crouched or soaring from the rafters. Ford’s reinterpretation of the folk lore and folk art, which is so intrinsic to the public perception of the castle, takes on a fantastical and sometimes sinister edge. Rendered in bronze, jesmonite and ceramic, and clothed in brilliant swathes of wool and felt, her child-sized figures are inherently tactile. Their postures are pointedly and recognisably human.

Ford imagines a direct conversation between the past and present; one where parrot-children flock to disrupt festivities in the banqueting hall; monkeys run amok in Lady Bute’s chamber and knights are seemingly felled in the courtyard. Each tableau is a testament to Ford’s accomplishments as both a sculptor and storyteller.

“I am are thrilled that this year we will be able to show Laura Ford’s work in the iconic setting of Castell Coch. This new partnership between Cadw and Gallery TEN will give visitors the chance to see some incredible contemporary art, in one of our most loved Welsh castles.

“The arts, culture and heritage sector play an important role in creating a vibrant, diverse and interesting community for residents and visitors alike. I hope that this unique exhibition encourages people from inside and outside Wales to visit Castell Coch, opening up opportunities to excite and inspire our visitors in unexpected ways during this year’s ‘Year of Discovery’.”

Cardiff-born Laura Ford studied at Bath Academy of Art from 1978-82 and at Chelsea School of Art from 1982-83. Ford is unique in having become identified with the New British Sculpture movement from her participation in the 1983 survey exhibition The Sculpture Show at Serpentine Gallery + the Hayward, as well as participating in British Art Show 5 in 2000 and representing Wales in the 51st Venice Biennale in 2005. Her fantastical, witty and often menacing work is held in many public collections including the British Government art collection, National Museum of Wales and Tate Gallery, London. Laura resides in London.