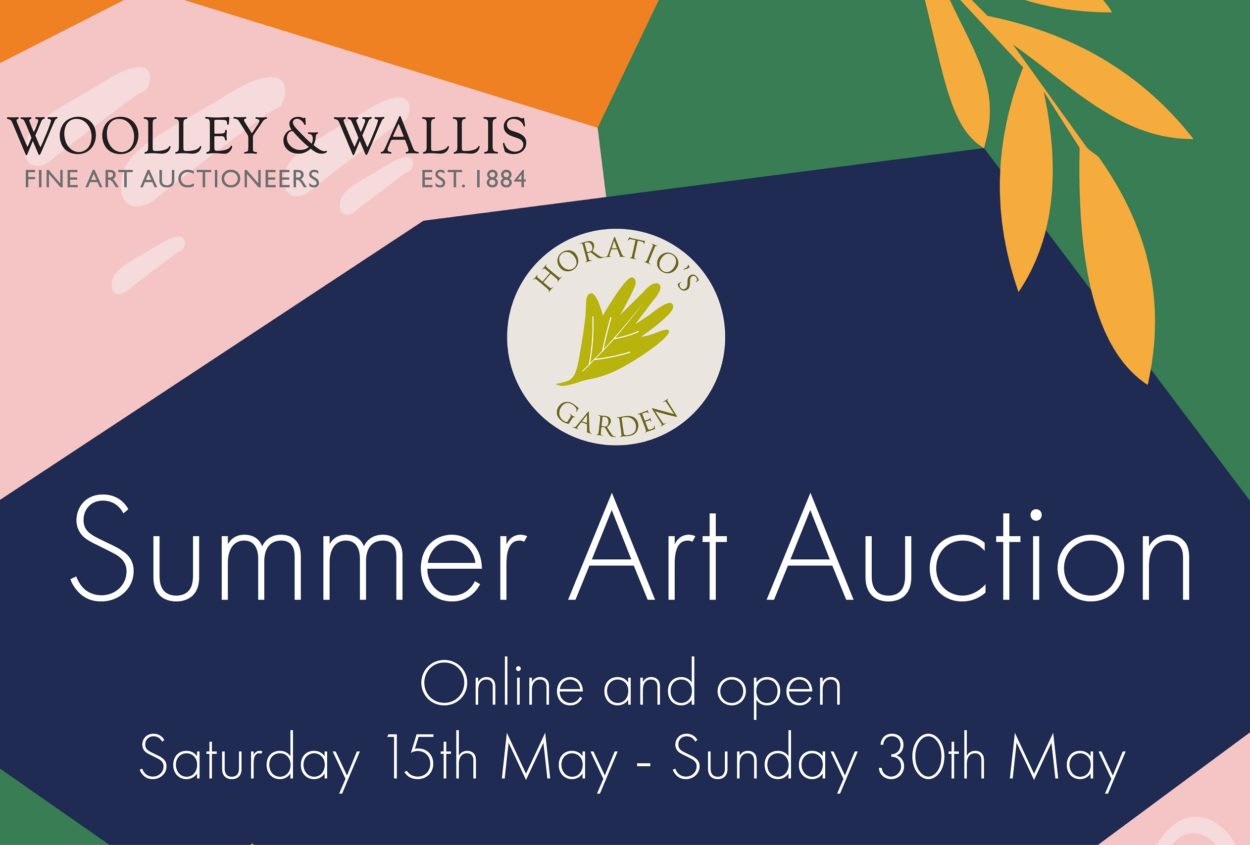 Over 60 of the UK’s leading artists have donated works to be auctioned online from Saturday 15th – Sunday 30th May 2021 to raise vital funds for Horatio’s Garden, a charity that supports patients, their loved ones and NHS staff affected by spinal injury through creating and nurturing beautiful, accessible, therapeutic gardens in NHS spinal injury centres. There are five currently in existence and the charity plans to bring a stunning sanctuary to each of the 11 NHS spinal injury centres in the UK.

Following in the successful wake of the charity’s annual Secret Art Sales, this will be the very first Horatio’s Garden Summer Art Action. It will feature works by renowned British and international artists including Maggi Hambling, Tim Burton, Sean Henry, Vanessa Jackson and Rob and Nick Carter, alongside some of the UK’s most exciting emerging artists, including Christabel Blackburn, Patrick Morales-Lee, Dawn Beckles and Hitomi Hosono.

The Horatio’s Garden Summer Art Auction will feature new and recent works and includes paintings, sculpture, ceramics and photography, ranging in price from £300 – £30,000. Many artists have donated works which express the freedom and delight of being in nature and the profoundly curative effect this can have on the human body, both physically and mentally.

The auction is being curated in collaboration with fine art auctioneers Woolley & Wallis. Those artists invited to be part of the auction will receive a maximum of 50% of the sale price, with a minimum of 50% being donated to the charity. However, the majority of the artists involved are generously donating much more, with many donating 100% of their profits.

Her Royal Highness Princess Eugenie is the Royal Patron of Horatio’s Garden and says of the auction, “I’m so grateful to all the artists donating works to the Horatio’s Garden Summer Art Auction. With their and the buyers’ support, the auction will help ensure the future of the charity’s stunning gardens across the country and will enable work to continue to improve the lives of everyone affected by spinal injury”.

Artist Maggi Hambling added, “Beautiful gardens, art and music are a heady combination. I trust the auction will help to make this feast for the spirit continue and thrive.”

Mouth painting artist Keith Jansz, who was paralysed from his shoulders down following a car accident in 1995, has donated a painting that aptly depicts a summer garden scene, with the mass of gorgeous blooms reflecting his signature impressionist style.

He has been a supporter of Horatio’s Garden for many years, particularly since the charity opened their Stoke Mandeville garden at the National Spinal Injuries Centre (NSIC) in 2018.

Having spent six months in the NSIC adjusting to his injuries with little access to the outside world, Keith recognises the importance of Horatio’s Garden and knows from his own experience that it undoubtedly changes people’s lives for the better.

Jansz says, “The last year has made society acutely aware of the value of such simple pleasures as fresh air and nature. In the past, long term residents of spinal units have been denied this enjoyment and diversion. I clearly remember my first experience of being wheeled out into the sunshine, to hear the birds singing and to smell flowers – after months of confinement on the ward it was transformative. But that was before Horatio’s Garden took such experiences to another level. Providing privacy and distraction from the overwhelming reality of the ‘new normal’ following a spinal injury, the gardens are lifesaving. Following my spinal injury, I learnt to paint by holding a brush in my mouth. The beauty of nature is a constant inspiration for my work. I’m delighted to be supporting Horatio’s Garden by donating this oil painting of sunflowers and delphiniums in my own garden in Oxfordshire to the Summer Art Auction”.

Online bidding for the works featuring in the Horatio’s Garden Summer Art Auction opens at 09:00 on Saturday 15th May at www.the-saleroom.com/en-gb