Moving tributes made by rarely heard voices of donor families, appealing to others make their choices on organ donation heard

Kidney Wales marked the ten-year anniversary of the Gift of Life Stone, the first in the UK, with a re-dedication ceremony today to remember those who have donated organs in order to save the lives of others.

“Ten years ago we laid the Gift of Life Stone following an approach from two donor families who had lost loved ones –a Son and Daughter – after campaigning since then for those waiting for an organ transplant”, said Professor Roy J Thomas, Chief Executive of Kidney Wales.

He added: “We again thank those who have donated in the last ten years and rededicate the Gift of Life Stone in memory of those who gave selflessly in the last 10 years and state what a difference it has made to those now living a new life”.

On the eve of the second anniversary of the implementation of the Human Transplantation (Wales) Act 2013 that introduced deemed consent for organ donation to Wales, the families and friends of organ donors gathered in Alexandra Gardens in Cardiff City Centre to give thanks and reflect on the progress made in Wales in the past ten years since the stone was originally laid.

Attendees heard heartfelt and moving speeches made by the rarely heard voices of donor families, along with Prof Roy Thomas, Jane Hutt AM and TV presenter Llinos Lee, who all paid tribute to the individuals and families who have taken the decision to donate organs to give the gift of life to others.

Kidney Wales, who played a leading role in the campaign to change the law in Wales, are appealing to families to talk openly about their wishes on organ donation to ensure that the choice and decisions of individuals are followed through.

Teddy Houlston from Cardiff lived for just 100 minutes and became then the UK’s youngest organ donor in 2014. His Parents Michael and Jess Houlston said: “All donors are important, our Teddy lives on and we want to support other donor families in discussing this important issue. We strongly believe in helping others as Teddy has done.”

Colin and Betty Burgess, from Barry, lost their daughter Louise 15 years ago, very suddenly at the age of 33. Louise had often discussed with her parents her choice and decision to donate her organs.

Betty said: “She was simply the kindest and most considerate person you could meet, such a generous spirit. We talked openly about important issues such as this, and it came as no surprise to me when Louise told us that she wanted to donate her organs, to help others in need, where she could. When she passed away, and we found out that she had registered to donate her organs, we wholeheartedly supported her decision without hesitation and were very glad to fulfil her wishes”.

Gaynor Taylor’s son Richard died in a tragic accident at the age of 23. Gaynor, also from Barry in South Wales, was a founder to the idea of the Gift of Life Stone 10 years ago. Gaynor said:

“We were very lucky – we made the decision to donate Richard’s organs because we felt strongly that this was the right thing to do. Within half an hour, we then found out that Richard himself had made the same decision, having already registered to donate his organs. It was a huge relief knowing that we were fulfilling his wishes. When you have just lost a loved one, it is the worst possible time to have to make that decision. If you have had that conversation beforehand, you are certain that you are making the right choice, on behalf of your family member. There is a huge difference between agreeing to fulfil your loved one’s wishes or having to give an answer on the spot – at the hospital – ‘Can we talk to you about organ donation?’ That is why it is vital that families talk about this and make their choices clear”.

Jane Hutt, Assembly Member for Vale of Glamorgan said: “I am very proud of my constituents Gaynor, and Colin and Betty, who through their shared experience and commitment to the campaign on organ donation, are keeping the legacy and memory of their children alive. They have been incredibly influential in increasing awareness of the importance of organ donation – and during my time in Government, I remember they were able to persuade people so passionately, with the support of Kidney Wales, to ensure that we moved to change the law to deemed consent. This isn’t a time to sit back however – there is still much to do in order to educate people and the Tell A Loved One campaign continues, in order to help reduce any resistance that is out there”.

Llinos Lee, TV Presenter and a family friend of Gaynor Taylor, knew Richard growing up. She said: “Richard and his brother were affectionately known as the naughty Taylor brothers whilst we were young – Richard was always just so full of life and positive energy. I am proud of Wales for the change in law to deemed consent – and I will always be inspired by Gaynor, who even through her grief, at Richard’s funeral – was handing out organ donation register cards. He went on to donate 7 of his organs, helping individuals and their families go on to live full lives. I have a son who is 4, and we go almost every week to the skatepark in the Knap in Barry. He thinks that Richard is a superhero and will grow up believing that organ donation is simply what people do, without question”.

Professor Roy J Thomas said, “More than one in ten waiting in the UK and on the waiting list will die before they get the transplant they badly need.  More than one in four people waiting for lungs will die. Families should talk. We have a great record on this in Wales and continue to lead by example in the UK in terms of willing to donate and not opting away from the decision”.

The memorial stone, gifted by the Kidney Wales, was the first of its kind in the UK and, ten years on, continues to offer a location at the heart of the Capital for families from across the UK to visit and remember their loved ones.

For 50 years, the Kidney Wales Foundation has been at the forefront of kidney patient care, well-being and research in Wales. This work is only possibly through the generosity and hard work of their supporters. For further information on volunteering and fundraising opportunities with Kidney Wales, please contact [email protected] 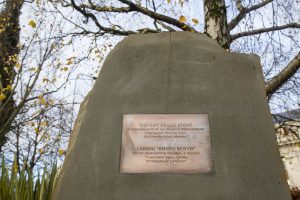