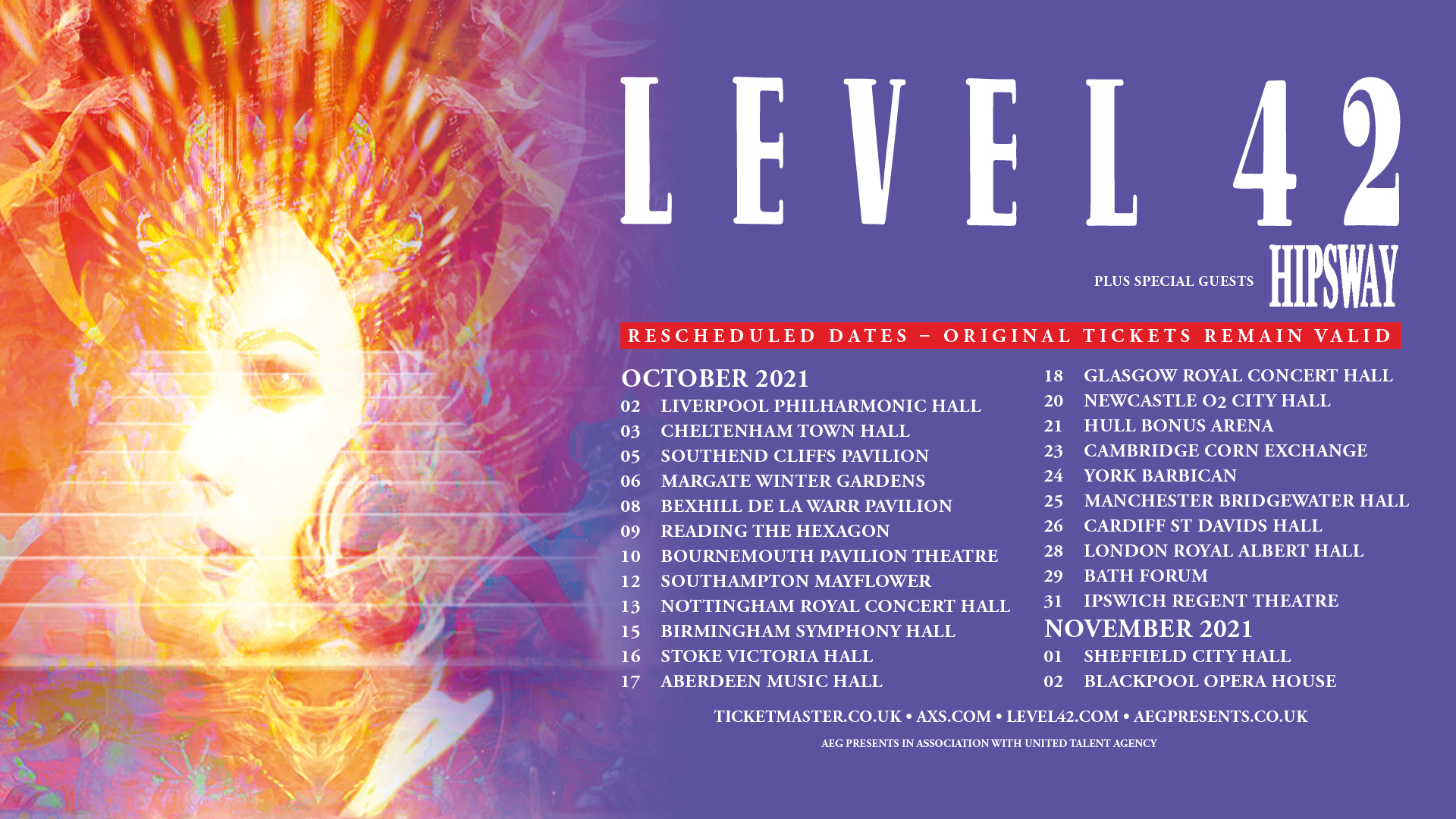 Formed in 1979, Level 42 entered their fifth decade in 2020, planning to mark that with the ‘From Eternity To Here’ tour, which of course had to be postponed. AEG Presents is delighted to announce that the band will now undertake the rescheduled 24-date UK tour in 2021.  Remaining tickets are on sale via aegpresents.co.uk [all tickets purchased for postponed 2020 dates remain valid].

The ‘From Eternity To Here’ UK tour will see the band play the length and breadth of the country. After everything that they have achieved, and after this enforced lay off, they have no interest in slowing down. “No way!” says bassist and frontman Mark King; “Touring with the band this year has been about as much fun as I can remember having had on the road and, if you had asked me back in 1980 if I thought we would be selling out theatres around the world when I was sixty years old, I probably would have laughed! Re-invention can be a wonderful thing!” Mark King is a musician who has truly created a sound and style all of his own and is in constant demand, both from the fans and from his peers – he was a special guest on Foo Fighters’ Taylor Hawkins’ record.

Level 42 is a band with nothing to prove, but all the desire to continue their run at the top.  To date the band and Mark have released 14 studio albums, 7 live albums, the Sirens’ EP, and 6 compilation albums, had 18 top 40 singles, including the era-defining ‘Lessons in Love’, ‘Something About You’, ‘Leaving Me Now’, ‘Running in the Family’, and ‘Hot Water’, sold out Wembley Arena for a total of 21 nights and sold in excess of 30 million albums worldwide. In short, they have proven to be one of the most successful British bands ever and, with the recent re-issues of the band’s vast catalogue on Universal Music, and the ‘Collected’ series on CD and Vinyl, it is clear they continue to set the benchmark for British Jazz Funk. The ‘Eternity Tour DVD 2018’ is available at www.level42.com

The ‘From Eternity To Here’ UK tour in 2021 is a chance for the band’s fans to check in once again with a truly class act: Level 42 continue to set the standard. Don’t miss them.

We have 2 pairs of tickets up for grabs for the 26th October Tour date at St Davids Hall.  Tell us in your own words what you love about the band and why you should win. Competition closes 6th September 2021.