Mackintosh Lawn Tennis Club were named Tennis Wales Club of the Year for 2017!

Mackintosh Lawn Tennis Club are extremely proud to announce that in the recent Tennis Wales Awards evening, they were named Tennis Wales Club of the Year for 2017!

Mackintosh LTC is extremely grateful to all their members and everyone involved with the club for their fantastic support, which has helped them to achieve this award.
2017 was an extremely successful year for the club.

Some of the club’s biggest achievements from the last 12 months are shown below:
• Increase of members from 231 (2014) to 351 (2017)
• Increase of players on the programme from 208 (2014) to 285 (2017)
• 3 out of 6 Winter League teams promoted during 2016/17 season
• 4 out of 4 Summer League teams promoted during 2017 season
• 14 teams entered in AEGON Team Tennis South Wales (most teams out of any clubs in South Wales)
• AEGON Team Tennis National Open Tier Midlands Winners 2017 – qualified for UK National Finals
• Almost £2,000 raised for Charity in 24-hour tennis marathon
• 35 volunteers – including committee members, team captains and tennis leaders
• Started an outreach programme at Roath Park site to provide more opportunities for people in the community to play tennis.
• Several successful social events bringing members together at the club, including family quiz nights, Halloween party and Golf Day. 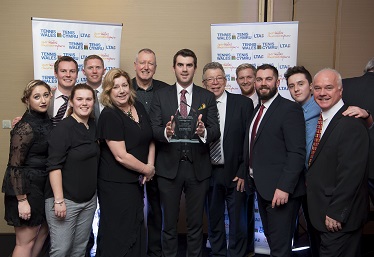