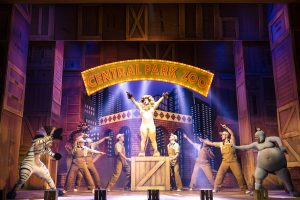 As a ‘huge’ fan of the animated film Madagascar (2005) and it’s sequels, my two (quite) young family members and I knew we were in for an entertaining night of Madagascar the Musical at the Wales Millennium Centre.

For those that are not aware of the storyline, it tells the tale of how Alex the Lion (played by X Factor 2016 winner Matt Terry), Marty the Zebra (Posi Morakinyo – in his first professional role – only graduating this year!), Melman the Giraffe (Connor Dyer) and Gloria the Hippo (Hanna Victoria) end up being shipped, mainly due to Marty having escaped via the ‘advice’ of the penguins from The Central Park Zoo in New York, to Kenya but end up falling overboard, thus ending up in Madagascar. The penguins mentioned above were puppets controlled by four actors who at first, and I have to confess that I didn’t think it would work, but the mannerisms and actions of them all were on-point, so much acting skill and vocal talent was given by these four, that it really did work, and then some. Different actors controlling the puppets also performed a few other characters, and these were just as impressive. 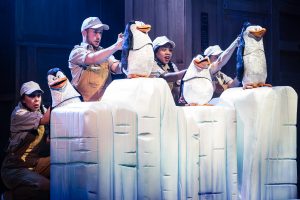 Of the four leading performers, Marty (Posi Morakinyo) owned the stage with his dancing and singing, Gloria (Hanna Victoria) was another remarkable singer and probably the nights best dancer whilst Melman (Connor Dyer) who had the arduous task of not only running around in a giraffe costume but also had to control the puppet’s head on a long stick, he deserves enormous recognition for this marathon of a task. And then there is the main character of Marty the Lion (Matt Terry) who sings impeccably, as one would expect from an X-Factor winner but I forgot all this as his performance, both as an actor and singer were without fault, the man is a natural talent on that stage . 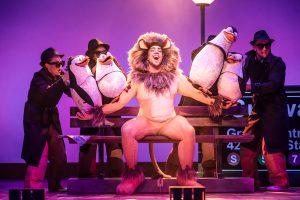 In the second half of the show, for me is one of my most favourite characters of the last thirty years, and that is King Julien the Lemur; a Ring-Tailed one to be exact! Voiced initially by Sasha Baron Cohen, I was hopeful that Kieran Mortell would be close as he could be to the original, for me, he was better, I laughed every time he said something. A spot-on performance by this talented young man. At the end of the night for the finale, it was King Julien that got all the crowd onto their feet to sing and dance, I just wished it had gone on for longer but seeing as most of the audience were (much) younger than I, it had to end at a reasonable hour. 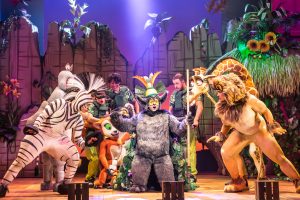 Overall, I/we had one of the best nights out, if not “The best”, and it was fun, fun, fun and even more fun than we could have expected when we rocked up. So if I were you, I’d definitely “Like to move it, move it” along to Madagascar the Musical which is only at Wales Millennium Centre, in Cardiff, until Sunday, August 11.