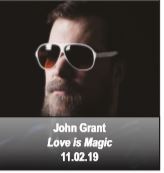 After waiting nearly three months, on Monday night I had the pleasure of going to see alternative sing-song writer John Grant at Cardiff’s St David’s Hall.

Upon stepping inside the door, I could tell from the loud chatter, excited kids and the adults with a drink in hand that Monday blues had well and truly melted away. The venue was packed and there was a great buzz inside the venue as people eagerly waited for him and the support act, E.B The Younger, to come on stage.
Having toured almost constantly since 2016 and not stopping until July this year, you might expect his performances to be a bit tired around the edges, but he delivered his hits with the same zeal as if it had been the opening night of his tour.

As he had released a new album in October 2018, many songs throughout the set came from the album, such as Preppy Boy and more striking hits such as Diet Gum and Metamorphosis, which the audience chanted along to word for word.
His charisma really shone through when interacting with the audience; he related personal anecdotes, made funny quips between songs and even answered questions that were shouted out!
His niche style certainly left me with a long-lasting impression of him, as he was the only musician I had seen that could effectively combine electro music with other genres like rock and alternative. You could tell throughout the night that he wasn’t just a one trick pony, as within his songs he managed to address societal issues, whilst merging in his personal experiences to make the songs relatable.

Moreover, the strobe lighting was almost blinding at points, but the light didn’t really fall on John or the rest of the band, so to be in darkness and come across in such a likeable manner was very impressive.
His passion about his music was evident throughout: if there hadn’t been a noise curfew at 11pm you got the impression that he would have carried on way beyond it, which was so nice to see.

Accompanying him were two electric guitarists, a drummer, and special guest Cate Le Bon, whom he collaborated with on Glacier and Torn Between Two Lovers; both hits left the audience enraptured throughout. The concert was seated, but at the end of the concert and after certain songs like Glacier, he was met with a standing ovation which he looked genuinely humbled by. The deafening applause created a larger impact than if everyone had been standing because you could see which songs genuinely moved the audience.

Up and coming indie/rock artist E.B The Younger and his pianist Dan did amazingly as support. The audience was hushed as they stood on the stage with just a soft spotlight on them both, their blended harmonies ringing out to the back of the hall.

It was heart-warming to see the great chemistry between E.B the Younger and John himself; both artists paid tribute to the other at the beginning of their sets, not just for their musical talent, but for each other’s character as well, which I hadn’t seen any artist do before.

His funny anecdotes in between songs helped him create a relationship with the audience and his final song ‘Don’t Forget Me’ was effective in reminding the audience to do just that – not forget him!
E.B The Younger’s ‘To Each His Own’ is out on March 8th or you can pre-order online at http://ebtheyounger.com/ on most major music platforms.