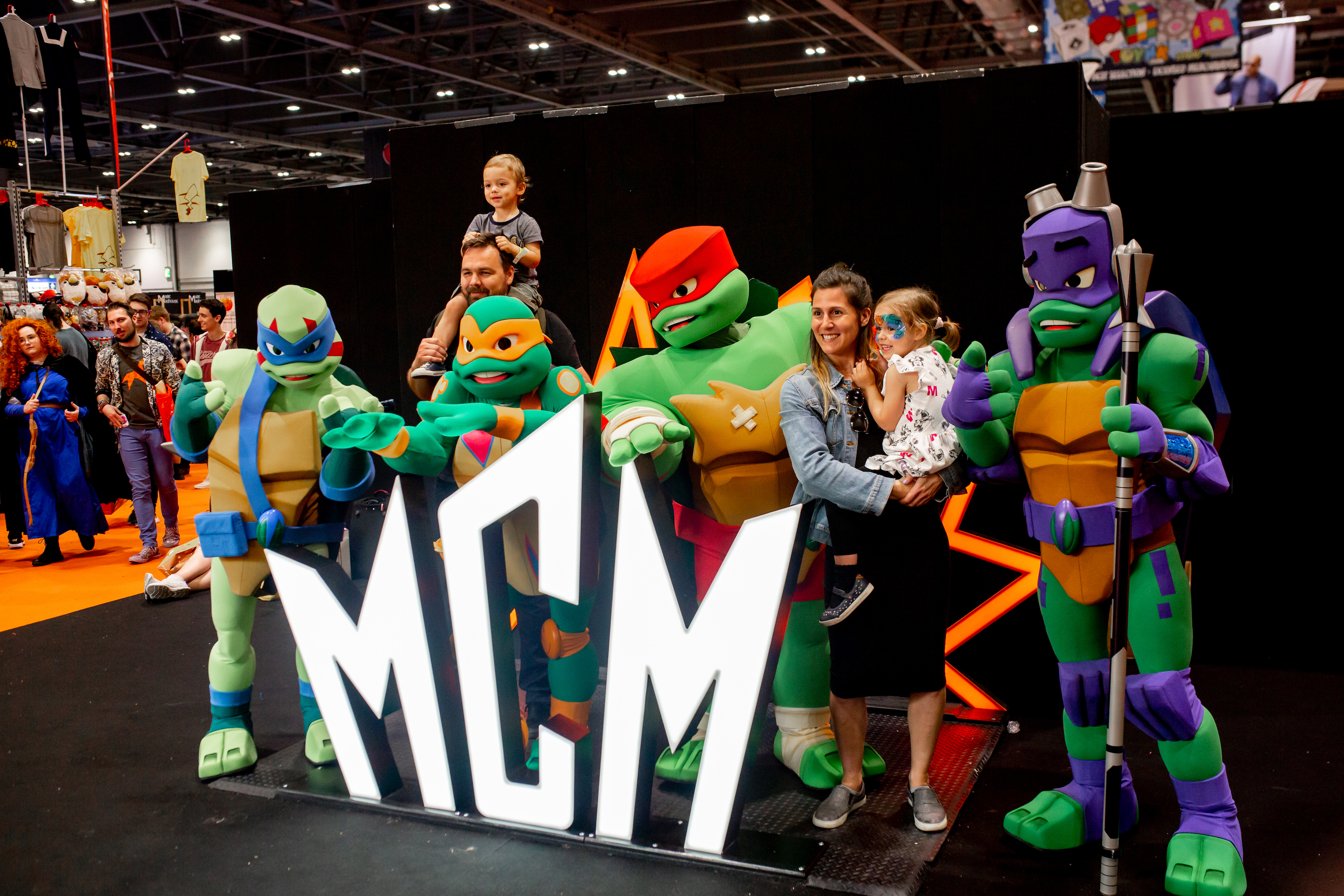 When people think of comic cons it usually involves visions of nerds, costumes and comic book heroes, but MCM London is so much more. Hailed as the best of the UK comic con’s, it features gaming, movies, comics and their creators, Pop Asia, Cosplay along with photograph and autograph opportunities, MCM London is a celebration of pop culture.

Hosted at the ExCel Centre based in the Docklands, London. The ExCel Centre is a huge venue and the map is essential, if you have a smartphone downloading the MCM app is highly recommended not only does it mean you have a map in your hands but also enables you to plan your time at the convention and get alarms when events are starting and you can take advantage of the centre’s free WIFI too. The venue is split into north and south halls with catering outlets and seating lining the corridor in between.

There are two Direct Light Rail stations that serve the ExCel Centre, Custom House and Prince Regent. On arrival on Friday via Custom House station even through the crowd the living wall that lines the path to the front doors of the Centre was visible and impressive, a wall made of plants that is quite long.

In the last section of the South Hall you will find Marvelous Games at the Granbule Fantasy Versus stand. The most striking thing about this game is the graphics, they are stunning, and we mean show-stopping stunning. The game also has a very engaging story line which is essential to playing the game. Granbule Fantasy Versus is an arcade fighter game being released for PlayStation 4 the release date is yet to be arranged. Granbule Fantasy Verus set in the skies is a quest for the true champion of the ring. Players can choose to battle AI or human opponent’s in 2-player local or online games. Characters from Granbule Fantasy make an appearance and watching the Granbule Fantasy anime series available on Netflix can act as a good base knowledge for playing the game. Check out the Marvelous Games at MCM London Special here: https://bit.ly/2PvFx7C 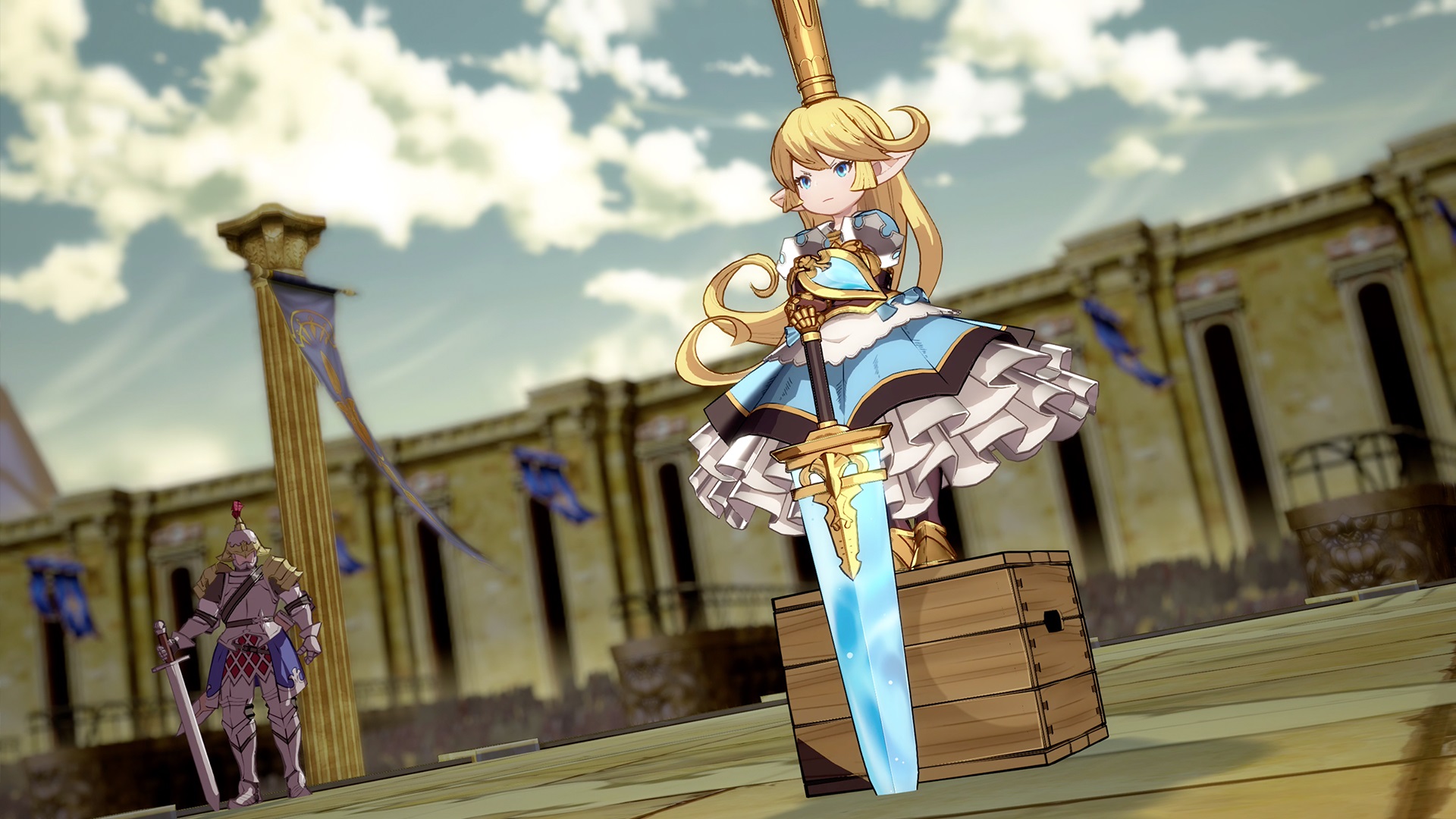 On Friday in the Comic Village two events unfortunately collided in the Cinema truck a special premiere of the first episode of Sky One’s new program ‘Watchmen’ was screened at 2:30 each day, On Friday however this collided with the panel featuring George Perez entitled From Teen Titans to Wonder Woman. George Perez is an iconic comic artist who worked at DC comics and crossed over to Marvel comics at one point. He was on the creator’s stage at 3:00 p.m. where he casually sat on a black sofa while the host asked questions about his career, which he gave long and detailed answers to. George Perez was incredibly down to earth and engaging during his performance. Explaining how he started at the age of 13, (no-one thought to question his age till a year later.) he was given projects that others at DC had little interest in at first, which led to him drawing Wonder Woman which was initially under-rated due to superheroes being mainly male at the time.

Like in Hollywood, there too was an golden age in comics and George Perez was an essential part of that era due to his incredible talent is considered a legend by many in the industry, unfortunately he revealed that due to being plagued with bad eye health he has announced his retirement from future comic con appearances. George Perez will announce in the short future that he is only doing private commissions, due to health reasons as the time it takes him to complete a project is substantially longer, where he could once draw 1-3 pages in a day now it takes him a month.
George Perez has had a long-distinguished career, and we wish him all the best with his retirement. Through-out his career he has donated money to various charities and continuing to help those charities is the intention behind the private commission work he is planning.

Finally, here’s a round-up of Friday’s events, at an event like comic con you can’t cover it all so here’s a quick summary:
From IT, The Loser club took the main stage to give fans a behind the scenes of Derry insight, including Sophia Lillis, Wyatt Oleff and Jaeden Martell. Bryan Dechart, Amelia Rose Blaire, Troy Baker and Nolan North also delivered a panel on their roles in games and TV. There was an exclusive screening of ‘SEE’ starring Jason Momoa which debuts on Apple Tv on 1 November. The Nightmare Before Christmas singalong. The comic village is where you would find all your comic, artist and related merchandise. Centre Stage hosted an anime filled day with Crunchyroll Premiere screening of In/Spectre and Somali and the forest spirit introduced by Johnathan Ross.
On the Live stage How Quidditch Will Change Your Life demonstrated how passions can be transformative.

The Cos Play Stage hosted workshops, photo and autograph opportunities including how to get started in Entertainment Journalism and How to create Suspense in Comics. Friday was the calmest day in terms of crowd size, and the energy was excitable, but relaxed and while dressing up isn’t essential there were some amazing costumes. 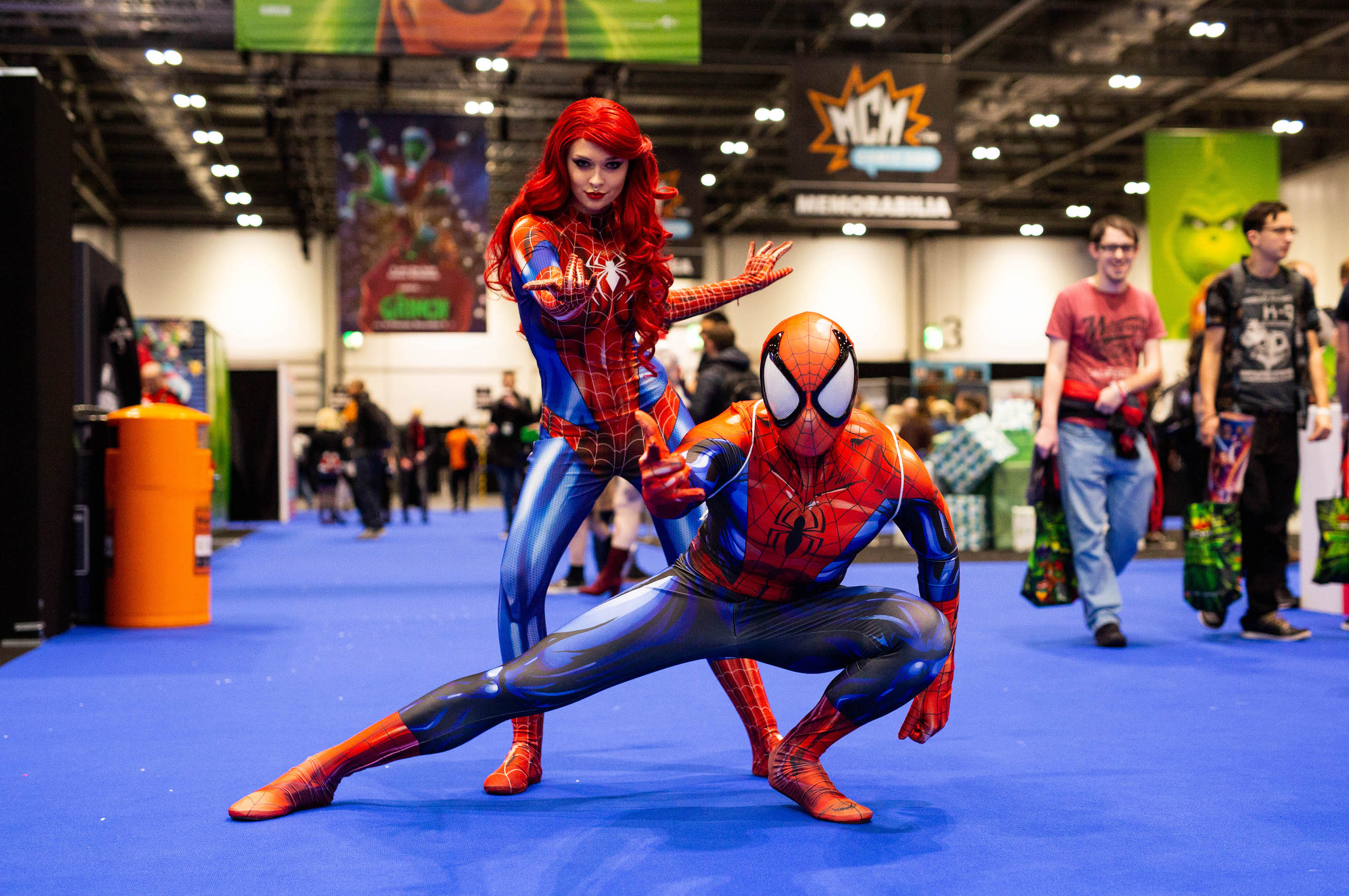 I highly recommend the weekend pass, because by the time you finished on Friday you’re going to want to see what else they have in store and the answer is a lot, MCM is one of the most organized but content heavy conventions I have been too. If not, the Saturday access is a must as MCM’s main event. 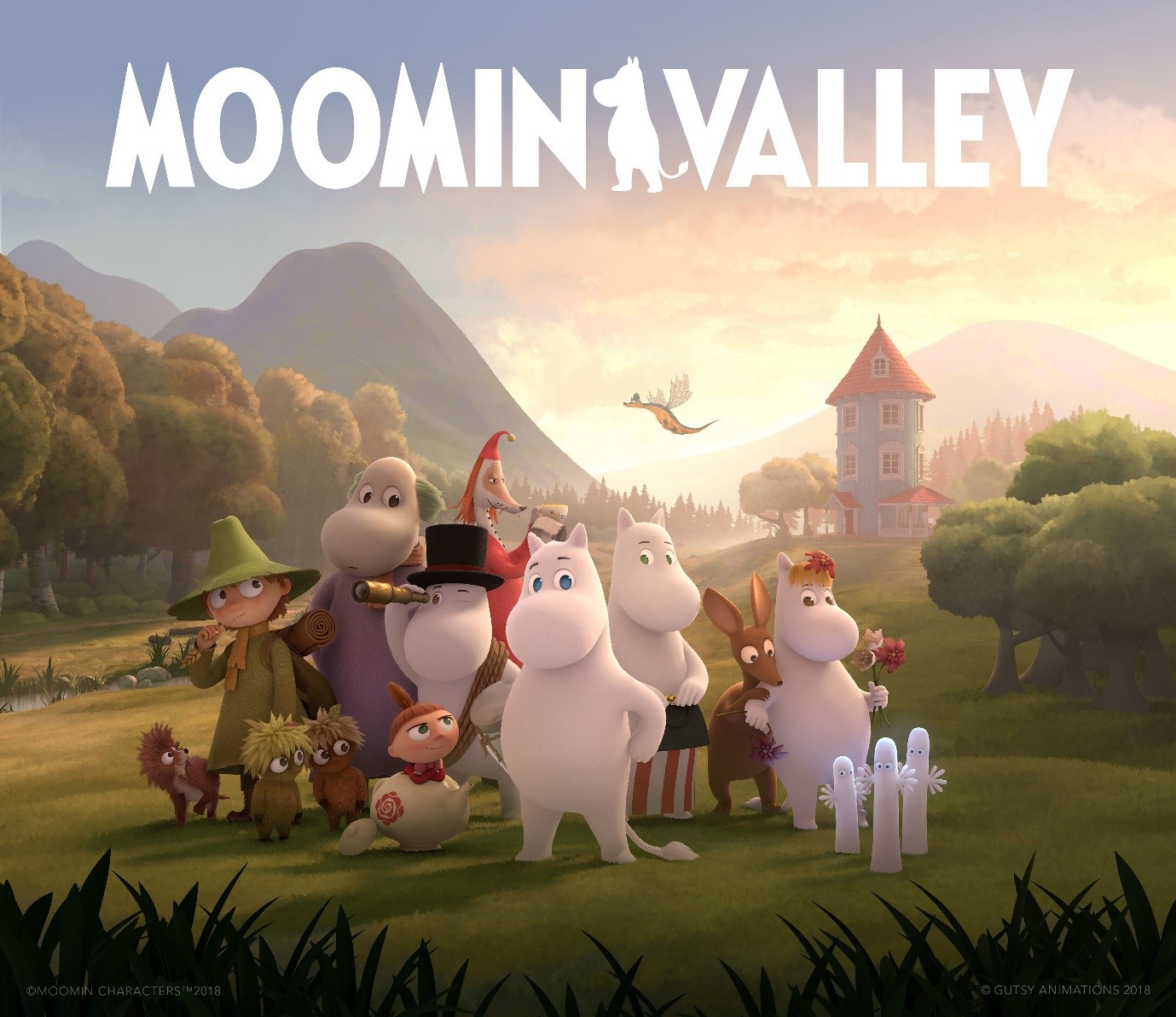 To ease your way into the day or enjoy some quality time with the little ones, MCM London screened two episodes of Gusty Animations Moomin Valley originally the work of Tove Jansson a Finnish-Swedish writer and artist in the cinema truck each day at 10.30 a.m.

If like me you remember the TV series The Moomins, it needs no introduction, but just in case, Moomin Valley centre’s around the character MoominTroll, who is a sensitive, kind and idealistic character who is growing up trying to make sense of the world around him, he lives with MoominPapa, MoominMama and Little My (the mischievous little sister). Gusty Animations used a blend of 2D and 3D techniques to create this adorable series which follows MoominTroll as the coming of age hero.

I was curious whether they would be able to recreate the innocence and wonder of the original series, but using water colours and blending techniques Gusty Animations have done a fantastic job and created a series that embodies all the quality of the Moomins that audiences young and old have come to love.

In the first episode screen MoominTroll catches a dragon and wants to keep it as a pet, but problems soon arise when the dragon bonds with his best friend Snufkin – a vagabond. Snufkin plays a pipe and is wise and imparts wisdom although he can seem a little distant and not as warm as the other characters.

In the second episode screened MoominTroll is left alone at home while his parent experience a night camping in the wild, but a mysterious creature called the Groot is freezing everything in its path, leaving MoominTroll and his friends to save the day and his parents. Moomin Valley is insightful, delightful fantasy in a program that children can easily relate to that teaches morals at the same time.

Series Two of Moomin Valley starts soon on Sky One.

Series One is being released on DVD on 4 November 2019. 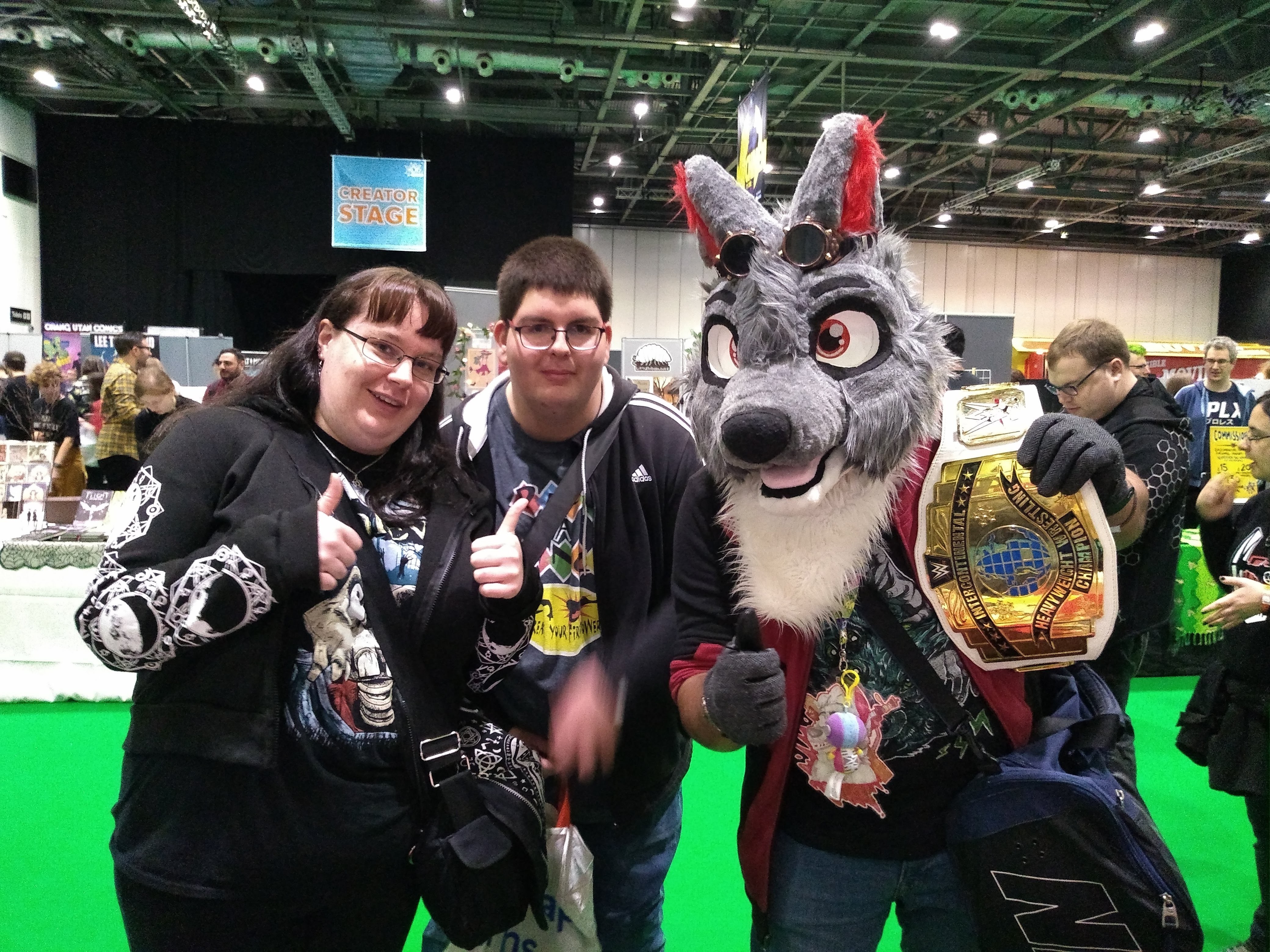 MCM is a great social event too!

MCM is a great place for meeting and making new friends, but also there is a lot of toys on sale in the Comic Village so Saturday saw a lot of families shopping together.

Lunchtime saw Jim Shooter take to the Creator’s Stage to deliver a secret history of Marvel Comics. The crowd gathered and almost took over the lower part of the hall where the creator’s stage was based to hear Jim speak. Jim Shooter was Editor-in-Chief of Marvel Comics from 1978 – 1987 which includes the earlier mentioned ‘Golden Era’ of comics, in fact he talked about how he built his dream team and with only two industry professionals he would have liked on his team missing at the time one of which was George Perez who was working on a DC title at the time.

When talking about the team he said, “If you can’t win with that team, fire the coach!” which says it all. Not only is Jim Shooter a legend in the comic book world he delivered an inspiring, practical account of his time at Marvel and talked about how knowing when to give artists and writers their freedom and when not to was essential to be a good Editor-in-Chief. Jim Shooter worked from a young age and was initially overlooked for the position Editor-In-Chief for two years, before he was offered the position. He possesses the qualities of a great leader, always fair but organised he installed structure and found ways to save money which was then redirected into pay rises for the artists and writers.

Also was not afraid to speak his mind two occasions he retold were once when he reacted to Stan Lee’s comment “Their heroes with issues” insisting that instead “Their heroes with lives” and then yet again when talking to the team working on Dark Phoenix when the stated the ending would see her cured and sent off to live happy ever after with the rest of the avengers stating “you don’t take the German army away from Hitler and send him off to live on Long Island”. Jim shooter was both engaging and mesmerizing to listen to as he spoke for 45 minutes.

Saturday was a very busy day at MCM with the crowds doubling in size and a mass of amazing events including screening of Simon Pegg movies in the Cinema Truck, sessions on everything you could possibly want to know about Cosplay, learn to play Funkoverse, drawing the icons of DC comics, Go Go Power Rangers, Hasbro Stars Wars panel, Alex Rider presented an exclusive look at his new series. Steven Moffat and Mark Gatiss presented a look at BBC One’s Dracula. 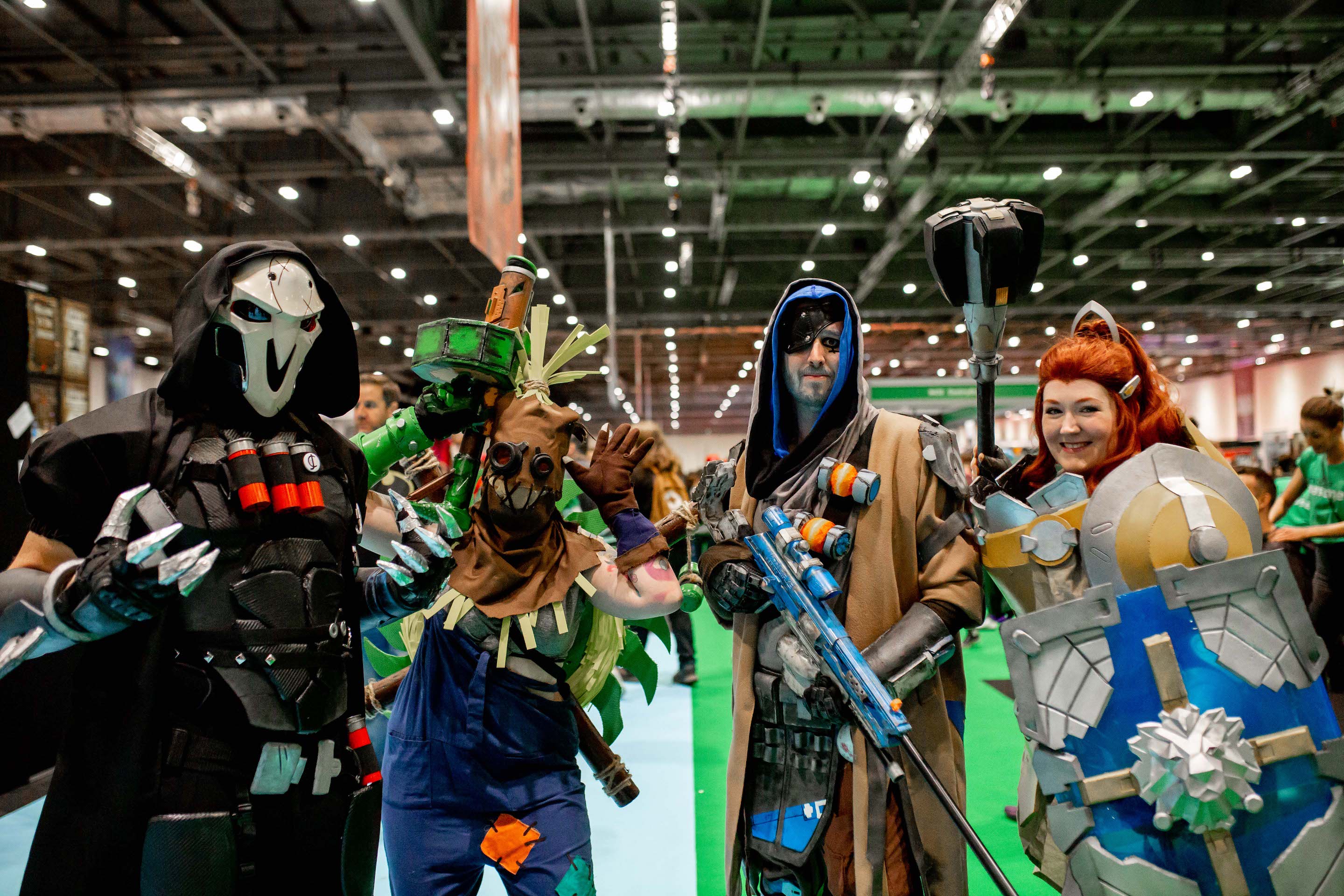 For more information on MCM London see www.mcmcomiccon.com
The final day of MCM London was Sunday which of course saw the panel from Simon Pegg as well as lots of other events like the Cosplay International competition. While we are very sad its over, MCM Birmingham is just around the corner 16-17 November 2019.