MICHAEL BALL IS No.1! SELF-PENNED SONGS SEND THE STAR TO THE TOP 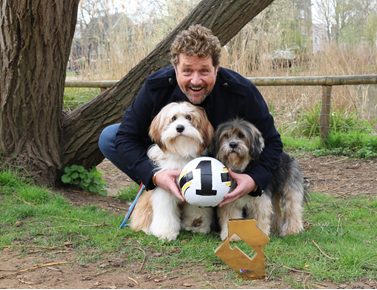 Michael Ball is, indeed, having a ball – today celebrating his first No.1 solo album in almost three decades with ‘Coming Home To You’, released last week on Decca Records. Landing straight at the top spot of the Official UK Album Charts on release, the star of stage, screen, radio and record has outdone himself, even by his own prolific standards. Michael’s 21st studio album has placed him ahead of albums from Jack Savoretti, Tom Walker and George Ezra, and firmly cements his position as the most successful west-end star of all time.

The singer’s last solo No.1 was with his eponymous debut album in 1992. Twenty albums later he reprises this triumph on a record which has revealed him to be a talented song-writer, as well as producer. Here, Michael presents for the first time a handful of self-penned tracks, the opening song and first single, ‘Home To You’, inspired by family, loved ones and, of course, his dogs (as featured in the music video). Sung with the warmth and sensitivity of Michael’s voice, this has proved to be a chart-topping combination.

Michael received his official No.1 Award this morning, whilst walking his beloved dogs – the only time he had “free” in between interviews. One of the hardest working men in showbusiness, today’s achievement is the latest instalment in the life of the double Olivier Award winner, multi-platinum recording artist, top-selling live concert performer and hugely popular radio and TV presenter, who has made box-office history.

This No.1 album follows the phenomenal success of Michael’s two recent duet albums with fellow singer and friend Alfie Boe, which saw two No.1 albums, two Classic Brit Awards and over a million album sales.

Today’s chart position and reaction from the public is a true testament to Michael Ball’s prowess as a singer and performer, and the unfailing dedication of his fans. Next, Michael embarks upon a staggering 23-date UK tour in April and May of this year, again reminding us why he is the one of the nation’s most beloved performers of all time.

Listen to ‘Home To You’ here: http://open.spotify.com/album/4lGM0L3nhrllwOfNsFKTrk