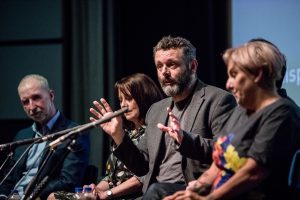 Dispossession: The Great Social Housing Swindle is a feature length documentary exploring the failures and deception behind the social housing crisis in Britain. Directed by Paul Sng, maker of the acclaimed cinema release Sleaford Mods – Invisible Britain (2015) this film tells the stories of individuals and families who have been uprooted from their homes and communities and looks at the alternatives to estate demolition and ‘regeneration’.

Michael Sheen hosted the Q&A session after the screening of the film, along with the film’s director Paul Sng. Michael comments:

“Dispossession is one of those rare independent films that not only speaks truth to power, but has managed to get those with the power to feature in the film itself. I was lucky enough to see an early preview of the film and I was struck by the stories told by people across the UK fighting to protect their communities, their homes, their way of life. Housing is one of the biggest social challenges of our lifetime and Dispossession reveals that much of the crisis has been deliberately designed this way. But it also shows us there is hope. Communities are fighting back, putting forward viable alternatives that put people before profit. I am looking forward to seeing the film again and hosting a lively debate in the Q&A after the show. The situation in Wales is slightly better than the rest of the UK but we still have a major fight on our hands to take the inequality out of the housing battle, to put homes before profit. Everyone should see this film and I hope it inspires more people to get involved in the many campaigns in communities across the country.” 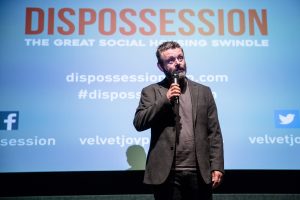 Dispossession: The Great Social Housing Swindle opened the latest season of Real to Reel, Chapter’s documentary film strand, and is likely to be screened again at Chapter in the near future due to its popularity with audiences. Upcoming films in the Real to Reel series include: Summer in the Forest (PG), (12-13 July) which follows the L’Arche commune that was set up by Jean Vanier as an alternative to the violent asylums that existed in housing people with learning disabilities; Queerama (15) (19 July), in which the music of John Grant and Goldfrapp takes us on a journey through the British Film Institute’s archive of gay film discovering the relationships, desires and fears of the LGBTQ community in the 20th century; Risk (Cert tbc) (21-27 July), a 2017 German made documentary following Julian Assange over six years; and many more.

Tickets for the Real to Reel series at Chapter are available now, with 20% off full price tickets when two or more of the films are booked at the same time. For more information and to book tickets, call Chapter’s Box Office on 029 2030 4400 or visit www.chapter.org