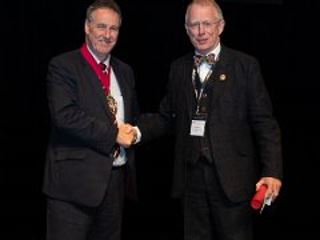 Mike Fardy has been awarded the prestigious 2017 British Association of Oral and Maxillofacial Surgery (BAOMS) Downs Surgical Prize at the 2018 BAOMS Annual Scientific Conference in Durham for his significant contribution to oral and maxillofacial surgery.

The Cardiff Dental Hospital and University Hospital of Wales-based consultant maxillofacial/head and neck surgeon said he “was humbled by the honour”. Looking at some of the previous incumbents, the BAOMS Fellow added: “These really were the individuals who developed and shaped our speciality. Just to pick out a few like Norman Rowe, Peter Banks, Andrew Brown and David Vaughan amongst others, and to be mentioned in the same breath as these people is very hard to take in.”

Mike Fardy was born in Cardiff but spent most of his training and early career outside of Wales: “So, when I came back to Cardiff in 1995, this was a dream come true. I set up the orofacial cancer unit, rebuilding patients’ faces with the most modern techniques available, something that had not been offered in Cardiff before.”

The challenges for a lone maxillofacial surgeon were enormous. Mike Fardy worked long hours and single-handedly treated all aspects of orofacial problems from major facial trauma and deformity through to cancer: “Only now are we recognised as a surgical speciality in our own right in the hospital, and at last we have increased the Maxillofacial consultants from one when I started to four now.   But, the greatest reward is 20 years later meeting the cancer patients I have treated.”

He said that another thing he was most proud of, was the work in helping to set up the patient-led head and neck cancer support charity Faceup Cymru: “This has gone from strength-to-strength providing great support to patients, but it is a real challenge to get other colleagues to support it,” Mike Fardy added.

Through his work with Cardiff Blues Rugby and the Welsh Rugby Union he has been able to promote Maxillofacial Surgery in Sport so that it is now an integral part of the medical setup at all major events.

“I have to thank BAOMS again for the honour of the Downs Surgical Prize. I am so proud to receive the award. It really does mean a great deal to be recognised by your peers. But, it is important to remember that this award is also for my wife Helen and my children Dafydd and Anwen, who have supported me through this journey and without their strength and encouragement this would have been immeasurably more difficult, if not impossible.”

Hayley Dixon, Director of Operations Dental Clinical Board at Cardiff and Vale University Health Board said: “On behalf of the Dental Clinical Board, we are delighted that Mr Fardy has received this prestigious award for his contribution to OMFS services during his long career, very well deserved.”

BAOMS awards a number of prizes to members of the specialty who have made significant contributions to the development of oral and maxillofacial surgery through research and clinical work. The Downs Surgical prize and medal are awarded annually to a person or persons who are judged to have made a major contribution to oral and maxillofacial surgery in the widest sense. For more information visit  https://www.baoms.org.uk/professionals/baoms_awards_prizes.aspx