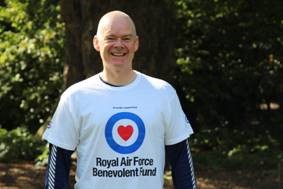 Former Squadron Leader Pete Thompson, of St Arvans, will tackle the 240-mile challenge on a Brompton bike to raise money for the RAF Benevolent Fund. He is among more than 50 cyclists who have signed up to take part in the Battle of Britain Paris to London Brompton Bike Ride this September.

Pete, a former airman who now works at the RAF Benevolent Fund, said: “I have seen first hand, from both my serving career and working with the Fund how important the charity’s help is to members of RAF family in their time of need. I simply believe in what we are doing and helping to raise some funds is the least I can do. I’m hoping to raise £2,000 and every penny will go towards supporting the vital work the Fund does.”

There were nearly 3,000 aircrew who fought in the Battle of Britain from more than 70 Squadrons. The cost of the battle was high – 544 lost their lives and a further 814 died before the end of the War. But it seems not everyone in Britain is aware of the battle and the ultimate price paid by so many of ‘The Few’ – the Spitfire and Hurricane pilots who took on the Luftwaffe in the skies above Britain in 1940.

In Wales, 40% of those asked in a recent survey commissioned by the Fund, said they did not know what the Battle of Britain was with 7% of those asked believing the battle took place in 1646.

Half of those living in Wales did not know who The Few were, and 8% thought they were a group of spies! The survey, carried out by Opinion Matters, questioned 1,000 people of all ages on their knowledge of the Battle of Britain.

The cyclists will tackle the 240-mile course over four days riding Brompton bikes, something Pete has prepared for.

He said: “I have been training on an old bike my friend gave me. It is heavy, the gears are a little clunky, the brakes don’t work and I have been doing all my training in the Wye Valley which is not easy. The idea being that when I sit on the Brompton it would be like going from a Robin Reliant to a Rolls Royce!

“The challenge is something I have not done before – I am not a cyclist so it is a whole new sport. I’ve never ridden on a Brompton – but I am sure I will be a Brompton fan especially as the bike is going to be by best friend for four days!”

It is hoped 75 riders will take part in the ride, each raising £1,000 to support the work of the Fund in providing emotional, practical and financial support to the entire RAF family. Riders need not have a connection to the RAF or a Brompton bike to take part in the challenge – just an interest in having fun!

Mike Neville, RAF Benevolent Fund director of fundraising, said: “It is rather fitting that an icon of British design such as the Brompton bike should be involved in our commemoration of the 75th anniversary of the Battle of Britain. It would be incredible if the riders raised £75,000 to help fund the work which the Fund does to help the RAF community.”

If you would like to support Pete, you can sponsor him at http://www.justgiving.com/owner-email/pleasesponsor/petebromptonchallenge

There are just a few places left on the ride, to sign up go to, www.rafbf.org