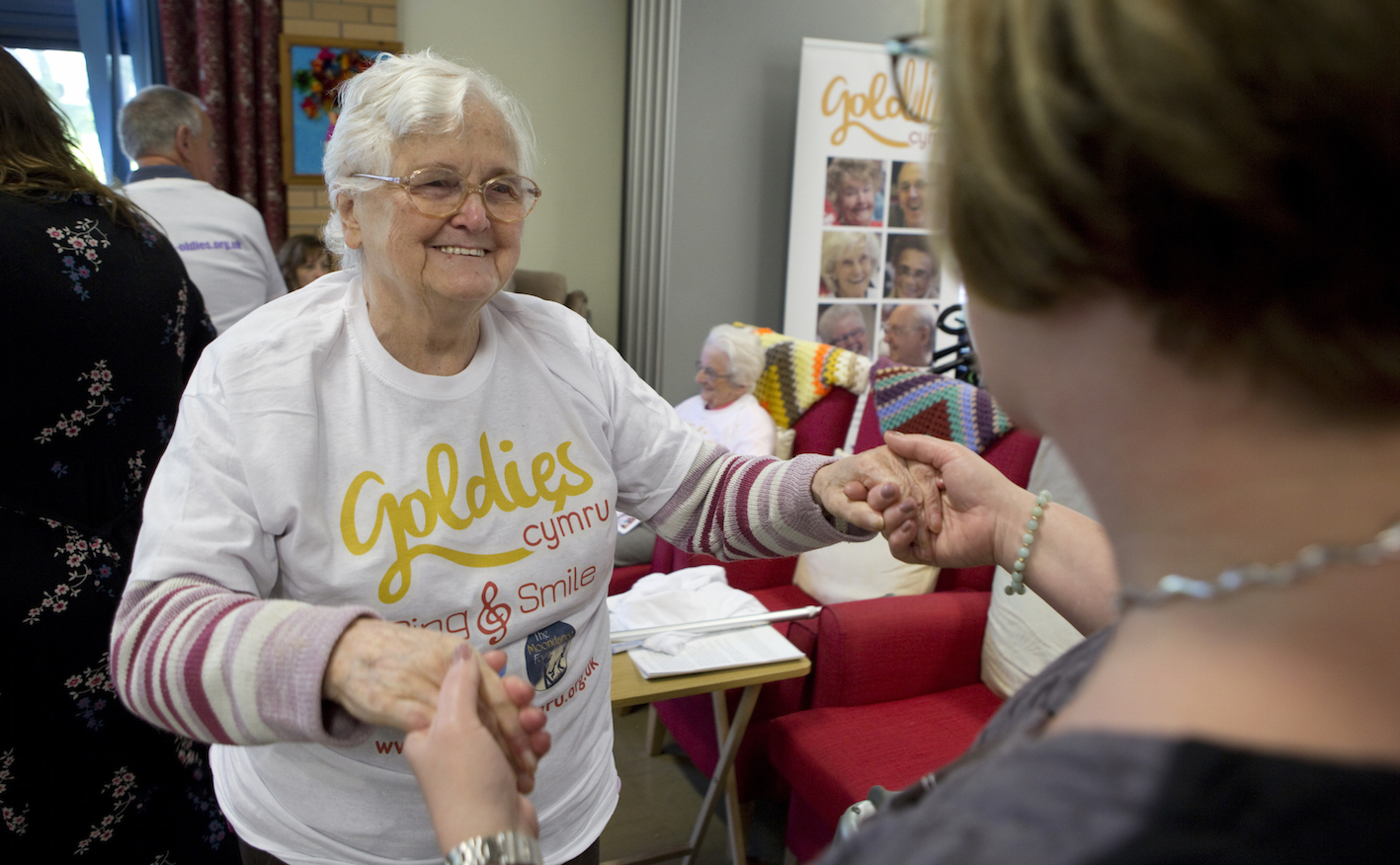 “I don’t know what I would do without Goldies. It keeps me going, it really does.”

That’s just one of the 100s of comments from one elderly lady who loves attending her Goldies sing-along session.

NOT a choir, the Golden-Oldies Charity, now in its twelfth year, reaches out to older isolated people across England and Wales. From the initial four sessions taken by founder Grenville Jones, in and around Bath, there are now over 60 dedicated session leaders and, by the end of 2019, there will be at least 200 regular FUN daytime Goldies sessions.

With the support of many Trusts, Foundations and local supporters many new sessions will be added in the months ahead.

In Swindon, with the support of the Borough Council, there are a number of regular sessions and a new monthly group tuned-up on Thursday May 16 at the Toothill Community Centre in Swindon. On that same day another new session started in Bath at the Salvation Army coffee shop in Green Park.

Additional sessions are being held with the Clevedon Happy Companions Club in North Somerset and Chard Library in South Somerset.

In Bath & North East Somerset a Memory Café in Bath was recently started at St Michael’s Church in the City Centre. There are also two new sessions at Church Court, Midsomer Norton and Kingfisher Lodge Care Centre in Saltford.

In Bristol a Goldies Day took place in April with over 100 people at St George, Bristol. Still in Bristol, two introductory sessions are planned for May and June at Stoke Bishop. Sessions are also planned for Bedminster and Patchway to raise the profile of the charity across the City.

A recent academic study of the work of the Golden-Oldies charity concluded;

“Goldies is very important in bringing isolated people in the community together, especially those who live on their own. By attending a session 93% of participants said they feel more involved in knowing their community.”

Heading South, in Devon Goldies is supported by Exeter City Council and the Darlington Charitable Trust, with plans for many additional sessions in the coming months working in partnership with Age Concern.

Goldies recently expanded into Cornwall where sessions now take place at eight Memory Cafes. More are planned by the close of 2019.

In Yorkshire more daytime singing is planned with a recent new addition in Eldwick and more to follow.

Goldies sessions have been taking place in the Midlands for the last five years. With special thanks to Doveridge PCC Goldies continues to develop across Staffordshire and Derbyshire with a new session launched recently in Rugeley.

With the support of The Mercers’ Company, Essex County Council and the Essex Community Foundation the Goldies Charity is developing its work across North East London and the county of Essex. New sessions in Clacton, Harlow, Chelmsford, Rayleigh, Dunmow, Tiptree, Maldon, Canvey Island, Hawkwell and Southend will tune-up soon.

Goldies Cymru was launched by Grenville Jones seven years ago, it has made tremendous progress with the support of the Cardiff-based Moondance Foundation and with major grants from the Wales National Lottery Community Fund and Wales Heritage Fund.

By the end of 2019 there will be 70 sessions across South Wales with plans to extend and introduce more sessions in North Wales in 2020. There are 18 dedicated session leaders in Wales.

Recent new sessions in Wales include Cowbridge, Newcastle Emlyn, Swansea Central Library, Porthcawl, Llanishen Hub – Cardiff and Lampeter. We have recently started working with LLandough Hospital in The Vale of Glamorgan on the Elderley Persons Ward as well as The Dementia Unit.

A new popular Bollywood session in Cardiff has started. Goldies Cymru has close links with the Stroke Association and the National Institute for the Blind and brings Songs and Smiles to increasing numbers of community Libraries.

Goldies also has an award-winning primary schools intergenerational programme. It won the Education Category of the National Lottery Awards in 2018, an amazing achievement for a small charity. Later this year Goldies will launch its new primary schools heritage project called, ‘Back to School’.

“As we have developed over the years our growth has included sessions for adults with learning difficulties as well as addressing the memory-evoking importance of music and singing to those who are living with Dementia.

“We owe a huge vote of thanks to all those organisations who have financially supported our journey and look forward to hitting the 300 Goldies session target by the end of 2020,” said Founder Grenville Jones.