Moto employees in Cardiff help to raise £2m in support of Help for Heroes. 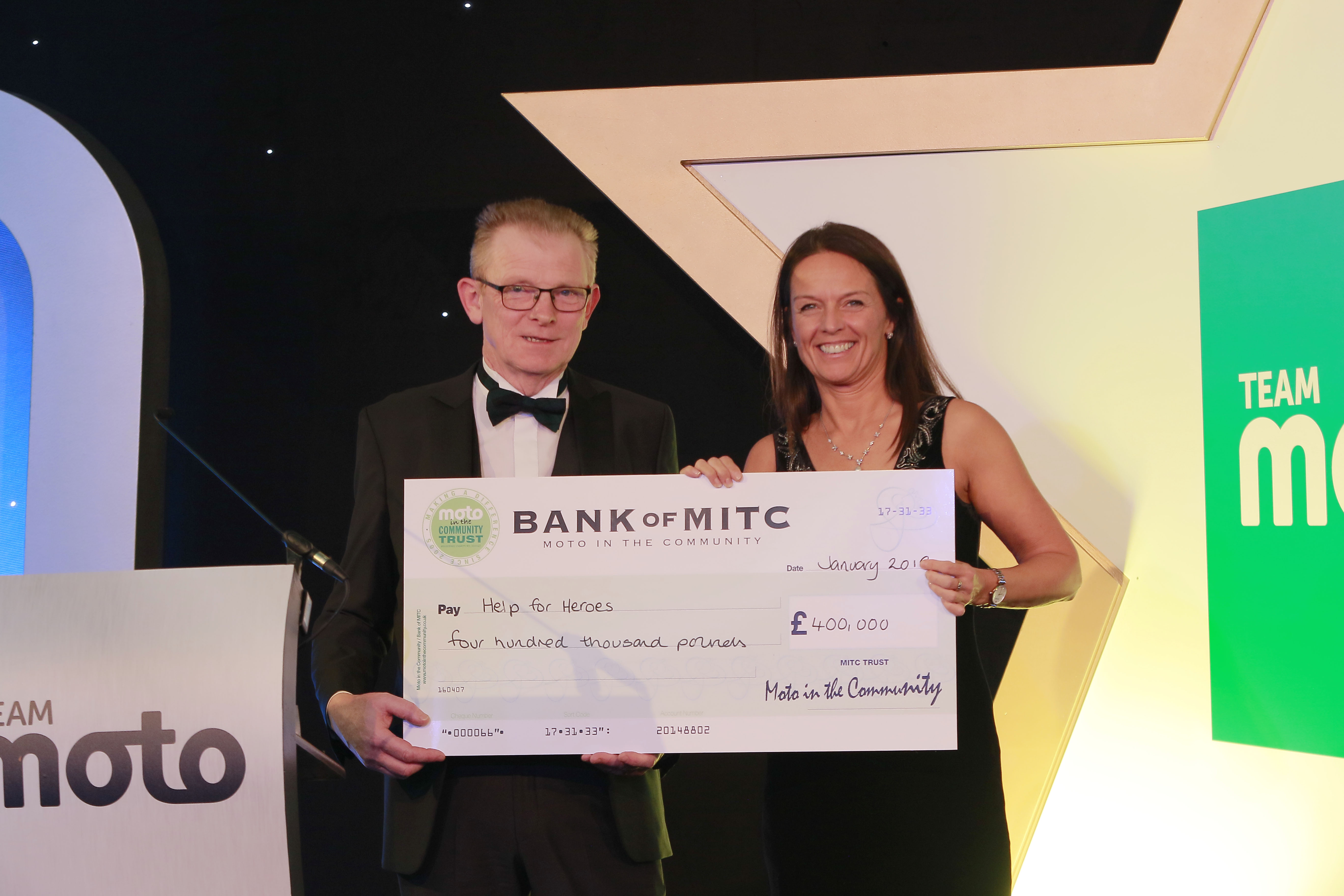 Moto employees in Cardiff played their part in raising £2m for Help for Heroes, which the charity will use to provide lifelong support to wounded Veterans.

The Moto service station on the M4 helped the Moto in the Community Trust (MITC), the charitable arm of Moto services, reach the milestone following a dedicated seven-year fundraising drive, which included collections on Armed Forces Day, school holidays and Bank Holidays, and an annual Big Battlefield Bike Ride through Northern France.

Their incredible fundraising efforts supported by Help for Heroes volunteers enables veterans to lead independent and fulfilling lives. The support has helped to fund mental health and wellbeing schemes, and keyworkers at Help for Heroes Welfare Support Hubs, where specialists offer advice and guidance on issues such as money, health, housing and respite.

The fundraising in Cardiff has seen Marcia Stephens, 80, from Newport, volunteering for the past seven years, fundraising and collecting donations at the Moto services.

Last year, Marcia took part in a charity static bike ride at the service station, joining a team of Moto staff to cycle the 71 miles between Swansea and the Severn Bridge. Hailing from a strong military family, she was inspired to collect donations and has visited the Help for Heroes Recovery Centres to see how Veterans and their families have benefited from the fundraising. 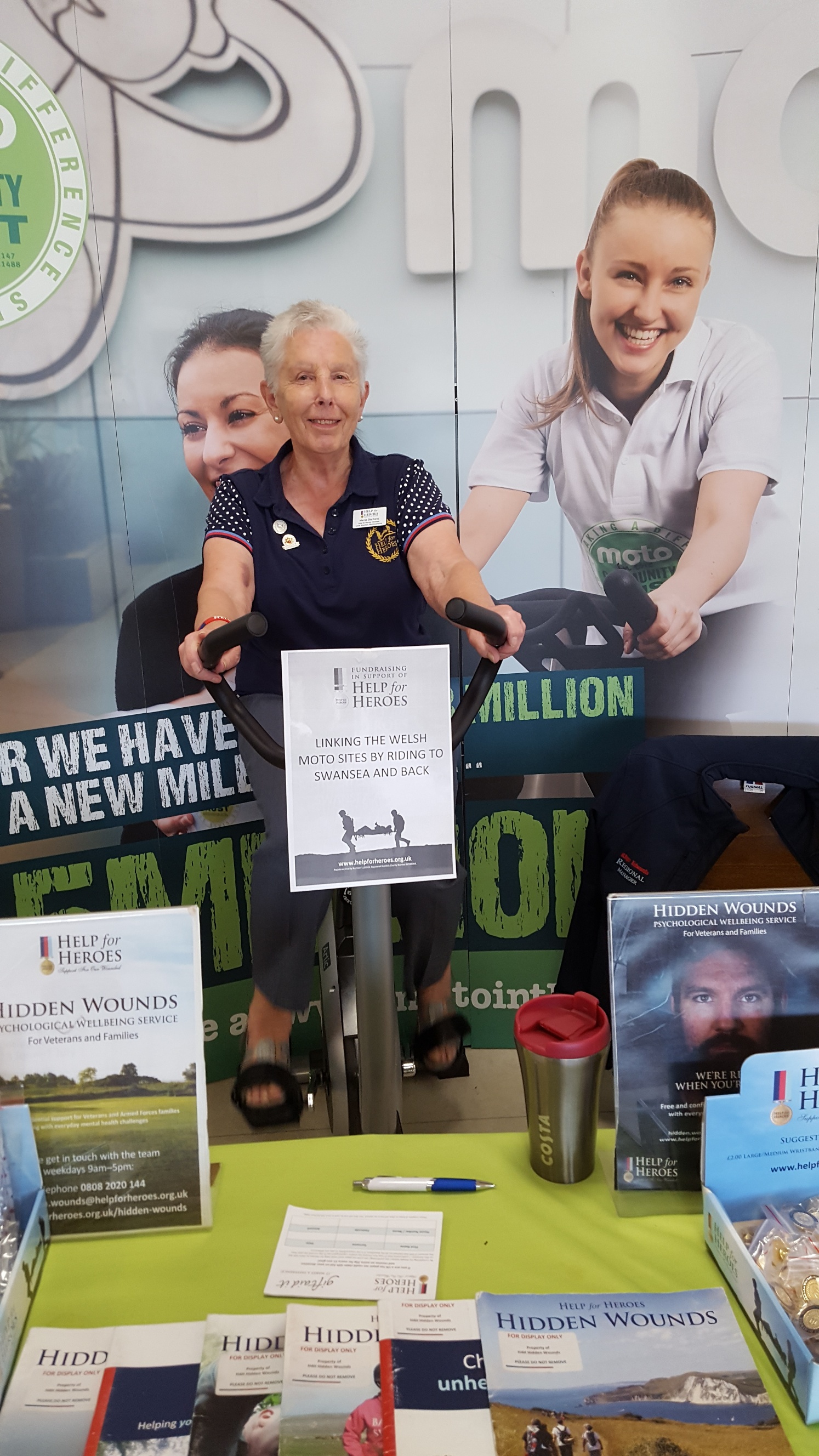 “Physical and psychological injuries such as PTSD can be devastating, but I have seen families stay together because of the work that the charity does. I see the difference Help for Heroes makes when the whole family, including grandchildren, come to some of the Veterans’ gatherings. It’s not just the Veteran that is helped – it’s their whole family. They do a wonderful job and I love doing my bit to help.”

Gill Parker, a Veteran who served in the Women’s Royal Air Force, is among the beneficiaries who have been directly helped by the fundraising by Moto. Gill served for seven years until a traumatic fall shattered her knee and led to her being medically discharged. Leaving the services so suddenly was not what Gill had expected and she was later diagnosed with depression.

Many years later, during a visit to Tedworth House Recovery Centre in Wiltshire, she walked around the gardens and signed up for the City and Guilds Practical Horticulture course run by Help for Heroes. The result has been transformational for Gill.

Gill, who comes from Worthing, West Sussex, and now lives in Bracknell, Berkshire, explained: “The course gave me a lot more confidence, a lot more understanding of gardening and working with a group made me feel part of a team again. Thank you to Moto for funding the gardens – the course I studied at Tedworth House Recovery Centre has made me feel very positive.
“I’ve now worked on a Chelsea Flower Show garden, where we won a gold medal, and I’m now helping build a garden at Basingstoke hospital for other injured service personnel. In the future, I’m looking to study garden design. None of this would have happened without the Tedworth House Recovery Centre gardens.”

Brian Larkin, Chairman of Moto in the Community Trust, said: “As Help for Heroes’ largest corporate partner, we are delighted to have raised over £2 million for them since we began our relationship in 2012.
“The partnership has been a huge success and, we are most grateful for the on-going support and generosity of Moto staff, Help for Heroes volunteers, our customers and our suppliers across the country.
“We’re committed to supporting the brave men and women of our Armed Forces to rebuild their lives and have set a new target to raise a further £1 million for Help for Heroes.”

Melanie Waters, CEO of Help for Heroes said: “Moto in the Community Trust is an invaluable partner to Help for Heroes. Thanks to the dedication and support of the team who have been fundraising at Moto, Help for Heroes has been able to provide support to wounded Veterans in their communities all over the Country. In the south, we have developed adaptive gardens for horticultural therapy, and in the north of England Moto’s support has allowed us to create a family programme and specialist family room at our Recovery Centre.

“Their fundraising has also enabled the charity to employ three specialist key workers who provide welfare support for wounded Veterans and their families. We are thrilled that Moto in the Community Trust has committed to fundraise a further £1million so we can continue to provide lifetime support to the Armed Forces Community.”