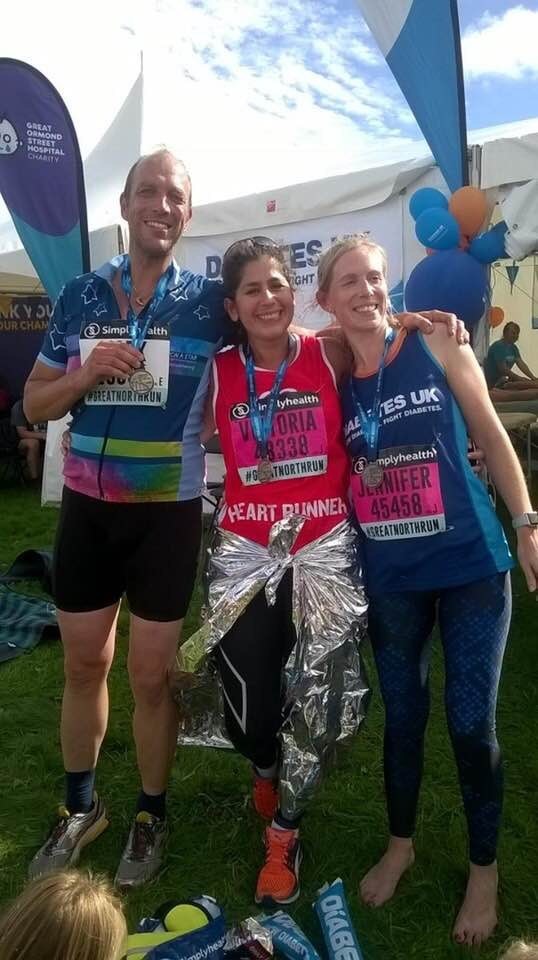 A mum from Pontypridd tackled the Great North Run on Sunday 9 September to raise vital funds for Diabetes UK Cymru.

Jen Matchett, 32, chose to run the world’s biggest half marathon in support of her dad David, 56, who was diagnosed with Type 1 diabetes in 1991.

Jen, 32, a secretary at Cardiff and Vale University Health Board, said, “A colleague mentioned how much water dad was drinking and suggested he get tested. He had just given up smoking so thought that was the reason for his increased thirst.

“Dad doesn’t let diabetes affect his life; he just takes it as routine. He is still out racing motorbikes in his spare time and loves spending time with his granddaughters.”

Jen completed the 13.1 mile run in two hours and 42 minutes. Officially the world’s biggest half marathon, the race saw over 50,000 runners take on the route from Newcastle City Centre to the coast in South Shields via the iconic Tyne Bridge.

Jen said, “The Great North Run was an amazing experience, there was such a community spirit of encouragement there. It was fantastic to pass the Diabetes UK supporters on the route, who cheered us on every step of the way.

“I was running with my two friends, Victoria and Mark, who really spurred me on. I don’t know what I would have done without them. Seeing how proud my dad and two daughters were at the end made it all worthwhile.”

Type 1 diabetes is a lifelong condition that affects around 19,000 adults in Wales. People with the condition don’t produce the hormone insulin, which is responsible for controlling the amount of glucose in the blood. Nobody knows what causes Type 1 diabetes and it isn’t currently preventable. If not managed well, it can lead to devastating complications, including lower limb amputation, kidney failure and stroke.

Joseph Cuff, Fundraising Manager, Diabetes UK Cymru, said, “We’re really grateful to Jen for taking on this challenge for us in honour of her dad, David. It’s fantastic to hear how well he has managed his condition for more than 25 years.

“The money raised will help us fund ground-breaking research, care services and campaigns to change the lives of people with diabetes across Wales, and their families.”

To find out more about fundraising for Diabetes UK Cymru visit https://www.diabetes.org.uk/in_your_area/wales/fundraising