Winner of the Grolsch People’s Choice Award at the 2018 Toronto Film Festival and an official Selection of the 2018 Telluride Film Festival. In the US, Free Solo achieved the highest 2018 opening weekend per screen average for a documentary. 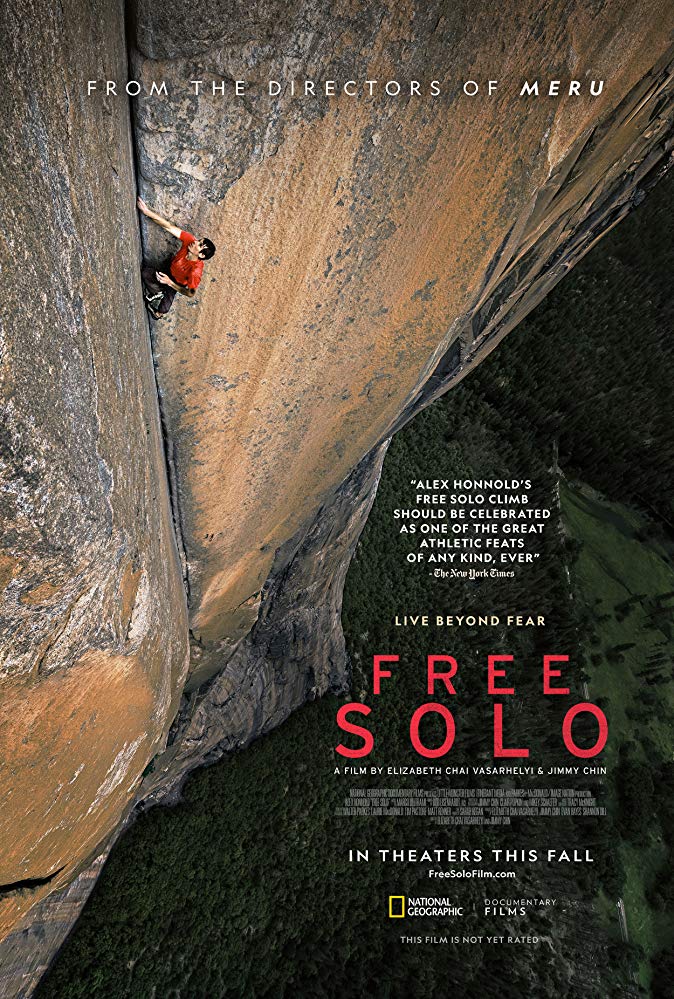 “Alex Honnold’s Free Solo climb should be celebrated as one of the great athletic feats of any kind, ever.” The New York Times “One of the most arresting documentaries of the year. See the film on as big a screen as possible.” Richard Lawson, Vanity Fair “Riveting…absorbing…and fresh. It rocks.” David Ehrlich, IndieWire “Brilliantly photographed by Jimmy Chin, Clair Popkin and Mikey Schaefer.” Keith Uhlich, The Hollywood Reporter “A superhero whose superpower is near fearlessness.” Richard Lawson, Vanity Fair.

“STUNNING… A REAL-WORLD THRILLER. The filmmakers capture Honnold’s climb in each bracing moment. Honnold comes across as a distinctly American figure, compelled to tackle elusive challenges rather than wallowing in the reasons not to press forward.” Eric Kohn, IndieWire “Gripping. For those who love the thrill of high-adrenaline adventure docs, National Geographic’s “Free Solo” will be a hard experience to top.” Peter Debruge, Variety
(LONDON – xxxx, 2018) ​- Following last year’s UK release of the BAFTA nominated film JANE, National Geographic Documentary Films announced today the theatrical release of a new feature documentary, FREE SOLO. The vertigo-inducing film from award-winning filmmaker E. Chai Vasarhelyi and world-renowned photographer and mountaineer Jimmy Chin, the directors of “MERU,” FREE SOLO debuted at the Telluride Film Festival and won the audience choice award at the Toronto Film Festival. In the US, FREE SOLO achieved the highest per-theatre average debuting to $300,804 on four screens, translating to $75,201 per location. FREE SOLO (14 December) will be distributed by Dogwoof, in select cinemas across the UK.

FREE SOLO is a stunning, intimate and unflinching portrait of free soloist climber Alex Honnold, as he prepares to achieve his lifelong dream: climbing the face of the world’s most famous rock … the 3,200-foot El Capitan in Yosemite National Park … without a rope. Celebrated as one of the greatest athletic feats of any kind, Honnold’s climb set the ultimate standard: perfection or death. Succeeding in this challenge places his story in the annals of human achievement.

FREE SOLO is an edge-of-your seat thriller and an inspiring portrait of an athlete who challenges both his body and his beliefs on a quest to triumph over the impossible, revealing the personal toll of excellence. As the climber begins his training, the armor of invincibility he’s built up over decades unexpectedly breaks apart when Honnold begins to fall in love, threatening his focus and giving way to injury and setbacks. Vasarhelyi and Chin succeed in beautifully capturing deeply human moments with Honnold, as well as the death-defying climb with exquisite artistry and masterful, vertigo-inducing camerawork. The result is a triumph of the human spirit that represents what The New York Times calls “a miraculous opportunity for the rest of us to experience the human sublime.”

E. Chai Vasarhelyi said: “We wrestled with including the meta conversation around our filmmaking process. Ultimately, it was clear that the filmmaking itself was an important part of the story. Every day presented ethical questions of risk and filmmaking. It was an ongoing process between Jimmy and I (as directors) and Alex as our subject.”

Jimmy Chin said: “In making this film, I had to trust Alex from the beginning that he would only decide to free solo El Capitan if he felt he was 100 percent ready. It’s difficult for me, even now, to imagine that someone could feel they were 100 percent ready to free solo El Cap. The technical difficulties are such that even if you’re a professional climber, with a rope, on one of your best days, you could fall. Beyond requiring superhuman power and endurance, the climbing on Freerider is very insecure and complex; it requires an enormous amount finesse and nuanced body positions. There are sections where it’s purely friction. Your feet are standing on nothing and there are no handholds to catch yourself. You have to be perfect. And he was.”

National Geographic Documentary Films is committed to bringing the world premium, feature documentaries that cover timely, provocative and globally relevant stories from the very best documentary filmmakers in the world.