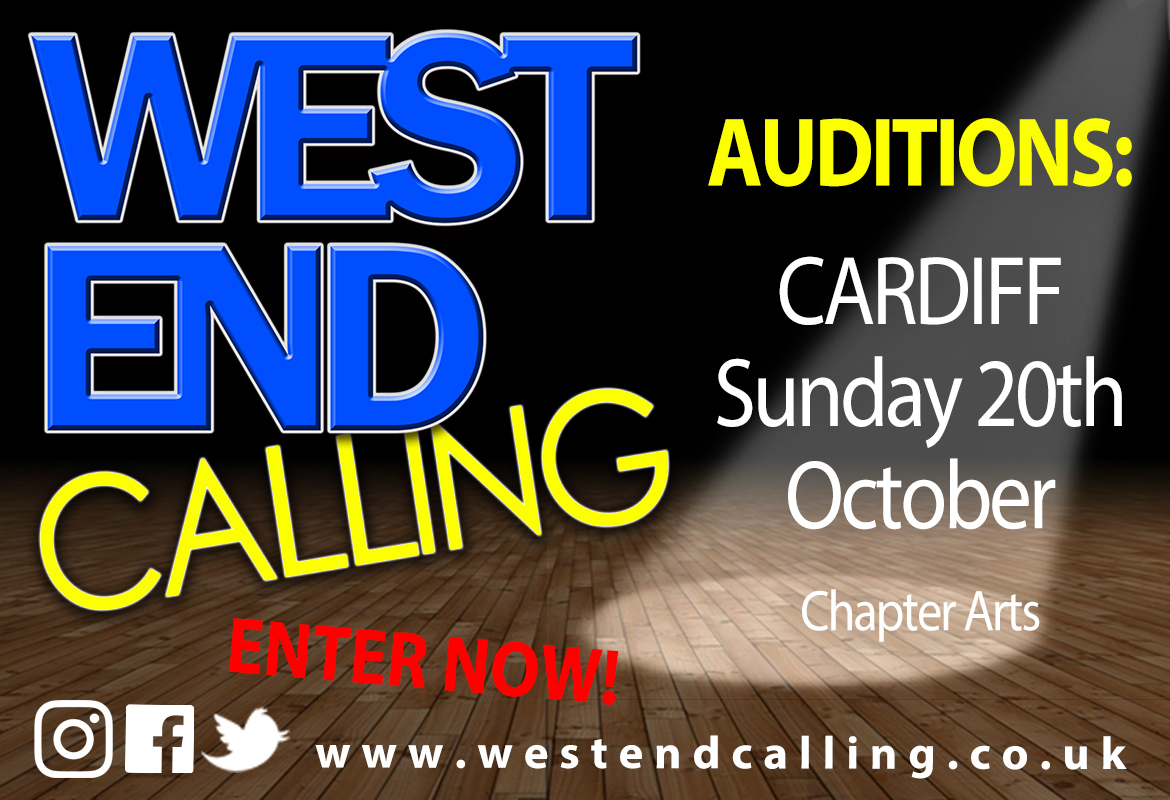 Are you a budding musical theatre performer aged 6 to 21? Do you dream of performing in London on a West End stage?

The talent competition, West End Calling is coming to Cardiff on Sunday 20th October at Chapter Arts Centre, and they want to see YOU!

Now in its 5th year, West End Calling is a national singing competition for young people offering contestants the unique opportunity to audition in front of a panel of West End stars, learn from their expertise and perform live on a West End stage in the grand final in London.

A talent search with a difference, West End Calling is all about developing the skills of young musical theatre performers and giving them an experience that will boost their confidence and give them the opportunity to work with professionals. As well as the chance to perform live on a West End Stage, previous winners have received prizes such as a performing slot at West End Live in Trafalgar Square, professional headshot sessions, tickets to West End shows, casting workshops with top West End casting directors and much more.

The first round for the Cardiff heats is a private audition in front of a panel of West End performers who will give honest and helpful feedback on your performance. If you progress to the second round in the New Year, you will perform live to a theatre audience and the panel. The semi-final is also held in front of a live audience, and the fourth round is the Grand Final, which takes place at a prestigious venue in London’s West End in May.

The competition is run by actor, writer and producer, Alex James Ellison, co-writer and star of the hit new musical, FIVER, which had a sell-out run at the Southwark Playhouse earlier this year. As a professional performer and songwriter, Alex knows how difficult it can be to make your mark in the world of musical theatre, which is why he is so passionate about West End Calling.

“West End Calling is for all young people who dream of singing on a West End Stage. Not everyone can afford singing lessons or attend drama school, but if you’ve got passion and potential, your performing dreams could come true with just a little help from those in the know. West End Calling isn’t about ‘who’s the best’, it’s about nurturing potential and giving people a chance to shine. We promise that wherever you come in the competition, you’ll learn new skills, make new friends and have an experience you’ll never forget”.

If you would like to audition, visit westendcalling.co.uk where you can learn more about the process, watch videos and submit your application. Good luck!